As a reviewer (or even an enjoyer of movies and television), one relishes the opportunity to run into a movie/show with little or no preconceived notion of how the feature is going to be, yet you are left impressed by the work put into it and advocating that as many people see it as possible. Such is the case of In Treatment, a show with modest production values yet bursting at the seams with muted but powerful performances by all involved.

Based on an Israeli show of the same name, the premise of the show is simple; the center of the show is a New York-based therapist named Dr. Paul Weston (Gabriel Byrne, The Usual Suspects). The show covers five people seeking therapy and rotates from season to season. This particular season's clients are Mia (Hope Davis, Synecdoche New York), a lawyer who was a former client of Paul's when he practiced in Maryland. April (Alison Pill, Scott Pilgrim vs. the World) is a young college student dealing with a newfound cancer prognosis. Oliver (Aaron Shaw, Little Manhattan) is a young boy caught in the middle of his parents' divorce and Walter (John Mahoney, Frasier) is a CEO in the middle of crises at work and at home. The fifth client? Well that's Paul, who starts seeking treatment from his teacher and mentor Gina (Dianne Wiest, Bullets Over Broadway), primarily to manage stress caused not only by his workload but to help him deal with the loss of a patient he saw during the show's first season. Not having seen the first season, In Treatment did a good job of bringing me up to speed on events pretty quickly in part because Paul's relocation from Maryland to New York occurs during the break between Seasons One and Two. Newbies like me learn about Paul's divorce from his wife Kate (Michelle Forbes, True Blood), and through his sessions with Gina we learn about his mother's suicide when he was younger. 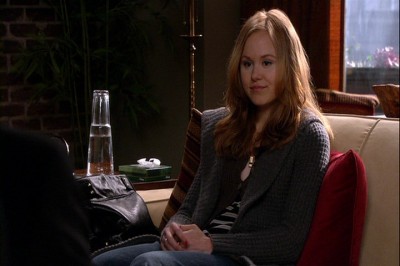 His sessions with Gina take on a bigger meaning when you consider that when it comes to therapy anyway, everyone seems broken, confused or lost in some fashion or another, whether they realize it or not. Mia serves as an introduction to the second season and where Paul's character finds himself, but to then have her seamlessly transition into one of Paul's patients was a nice creative stroke. Davis is an actress that is capable of doing such a transition, and in fact all of the 'patients,' Byrne included, all bring their top shelf performances to the table and each disc is almost an unknowing competition between the performers to outdo the other. Davis and Mahoney are established acting presences, and seeing their characters change through the course of their seven-week "treatments" (each character has sessions that run over seven week) from being strong-minded professionals to those looking for clarity in their lives is fascinating. They seem to be free of the clutter and distraction their jobs have been to their personal lives, and while they do have admittedly made a couple of severe decisions in the process, to see them be markedly docile among other behavior is striking.

As far as Pill goes, it seems as if she was a slight wild card in Scott Pilgrim, that there was more to her acting depth than we were seeing, and In Treatment, she delivers on that promise superbly. April decides to tell as few people as possible about her cancer, keeping few people as close to her vest as possible because she values friendship and loyalty. Paul doesn't violate that loyalty at first, though in eventually taking April to the hospital for her initial treatments he seemingly violates some professional ethics. Though he later gains her ire by telling April's mother, something that she mentions in their sessions was against her wishes. Paul's shifting boundaries are something he tries to remedy, though it doesn't help when Gina confronts him about resolving any lingering bad feelings about his father shortly before his death. 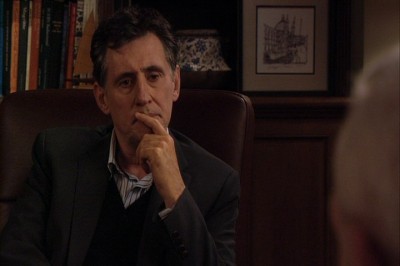 Moreover, Paul's evolving while helping his patients evolve, particularly in the latter sessions, is fascinating to watch. It's effective with Mia, Walter and April. And yet it's not as effective with Oliver, who has parents who seemingly care little about him (without knowing it) and going to a school where he is bullied. And as Paul's closure with his father improves, his relationship with (and identity to) Oliver grows more distance. There's a heartbreaking sadness with which Shaw utters his lines sometimes, and it's sadness that Paul knows all too well and hopes doesn't happen again. Shaw's performance is another one of the jewels in the show. The patients turn in great performances, and Byrne's evolution through the show is compelling as he maintains stoicism with his patients (for the most part) while dealing with this seemingly traumatic part of his life. And I haven't even mentioned Wiest, she of the recent Emmy win for the first season (Byrne won a Golden Globe for his work in Season One also). She takes a lot of verbal abuse from Paul during their sessions, and while he seems to have found a certain peace by the end of Season Two, she seems more skeptical of it, that it's one more out of convenience. One can only hope she's wrong, because one other theme that seems to purvey through Season Two is simpler: everyone seems to be broken, and they might not be able to repair themselves whether they know it or not.

There's a lot going on during In Treatment, though what occurs would seem to be an evolution of feelings and thoughts by well-built characters, combined with exceptional acting performances by those who inhabit them. It's hard not to get sucked in by them, and one can only hope that more attention is paid towards the show because this underrated drama might be one of the best on television. 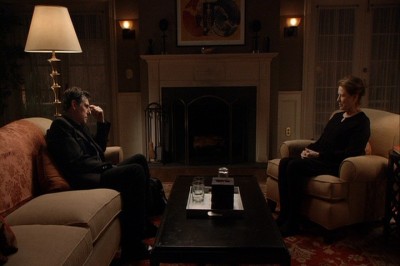 
All 35 episodes are presented in 1.78:1 anamorphic widescreen, consistent with their original (and presumed) high-definition filming and presentation. The discs look good, the image is natural without little noticeable edge enhancement or haloing, and the source material is as pristine as can be. Blacks are fairly solid and don't provide any moments of crushing, and in a scene when Paul and Oliver are talking outside on the playground, the change of scenery from Paul's home office makes you want to squint because it's strange to be outdoors in the bright sun. Still, this was a better looking show than I was expecting coming in and it shows.


The Dolby Digital 5.1 surround soundtrack isn't called upon to do too much, but when it does it does it with clarity and (in the case of a train pulling into a station) surprising low-end power. The sessions are quiet, but in one episode where Oliver drops something you're as startled as everyone else in the room is by the noise. Dialogue sounds fine and requires little in the way of adjusting. Altogether a solid-sounding piece of sound.


Aside from "previously on" recaps on each disc, no extras to speak of. Boo indeed.


In Treatment has poignant, heartbreaking and optimistic moments, sometimes all within the course of a tightly packed twenty-plus minute episode. The performances and character development concentrated into these bursts makes for compelling television, and after seeing Season Two I'm left wondering why HBO doesn't do more to publicize this well-acted piece of television. A must-see regardless.