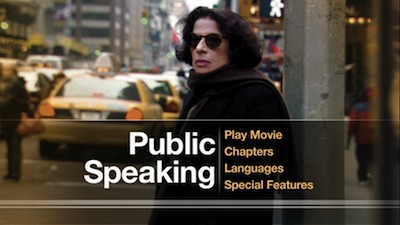 New Jersey-born author Fran Lebowitz moved to New York as an 18-year-old in the late 1960s. There, she began working in literary crowds, leading to her meeting Andy Warhol and scoring a column in his then new Interview magazine. This lead to more magazine writing and two collections of essays, Metropolitan Life in 1978 and Social Studies in 1981. Her last published book was a children's book released in 1994, and she has struggled with a ridiculously long "writer's blockade" (as Lebowitz terms it) ever since.

This stoppage is one of many topics lightly touched on in the recent documentary Public Speaking, a riveting and hilarious portrait of the writer as an intellectual big mouth directed by Martin Scorsese. I term Lebowitz that in the most complimentary of ways, as the entirety of the movie is essentially Lebowitz talking, either sitting at a table dishing to Scorsese or culled from her regular speaking engagements. Lebowitz may be having trouble putting pen to paper, but she has not lost the gift of gab, and so she continues to talk to audiences around the world, sharing her observations and fielding their questions.

Public Speaking is the ultimate showpiece for Lebowitz's wit and humor--and there are digressions in the movie that explore the difference between the two. Lebowitz is smart and funny and she never tires of sharing her curt wisdom. Scorsese keeps it simple, weaving added bits of material into his interview, including archival clips of Lebowitz and her inspirations and contemporaries. (The footage of James Baldwin and Gore Vidal separately tussling with a smug William F. Buckley is remarkable.) Using the author's own words, he carefully builds a profile of her for the audience, detailing her history and her career within the greater monologue he has put together. Listening to Lebowitz talk is no different than watching a master cellist work her instrument: when the musician plays, you don't cut away. (We even see this theory put to the test via a snippet of a real master cellist performing, chosen to accompany Lebowitz's revelation that she once wanted to play the cello.)

Lebowitz's humor is sharp and erudite, and she manages to comment on the culture that is without overly romanticizing what was. She is equally suspicious of the nostalgia of older people and the naïveté of youth. Each colors the world in their own way. Neither is wrong, it seems, as long as they accept that she is right. After watching Public Speaking, it's hard not to agree with Fran's own playful assertion that she knows everything. Maybe she doesn't, but whatever she doesn't know probably isn't worth knowing, and no matter what it is, it all sounds better when filtered through Fran Lebowitz's inimitable point of view. 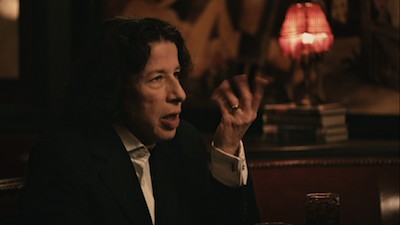 Video:
HBO brings the Public Speaking documentary to disc with a widescreen anamorphic presentation, sized at 16:9. The image quality is excellent, with the sharpness one should expect from a current cinematic creation. Archival footage looks good and is spliced into the movie well, and though the recent cinematography varies depending on where it was shot, it is uniformly good looking.

Sound:
A 5.1 Dolby mix is a bit of overkill for a talking-heads movie, but the important thing is that Lebowitz's voice gets the proper centering and she is easy to hear and understand.

There is also a Spanish stereo option and English closed captioning.

Extras:
The supplemental section is lead by two promotional pieces, billed as "Brief Interviews," one with Scorsese talking about the movie, one with Lebowitz. Each are about 2 minutes, and since there are also clips cut into these, not much of substance is said--hough hearing Marty trying to compare Fran to Travis Bickle is amusing, and her ribbing the legendary filmmaker about his tendency to relate everything to movies is priceless.

The "More Public Speaking" section is seven deleted scenes totally eleven miutes. More gold from Fran. You need know nothing more. The only non-Lebowitz scene shows Scorsese planning the restaurant set-up. A Fitzcarraldo reference is made in regards to the endeavor of moving a booth, proving Fran was right in that one promo clip.

FINAL THOUGHTS:
Public Speaking is a perfectly enjoyable one-woman show. Master director Martin Scorsese has created an hilarious and engaging showcase of author Fran Lebowitz, pushing her to center stage armed only with her unique way of looking at the world and the only tool in her arsenal that really matters, her words. It's smart and funny and a damn good time, giving audiences a sense of what this unique and wonderful writer is really like--and more importantly, why. Highly Recommended. 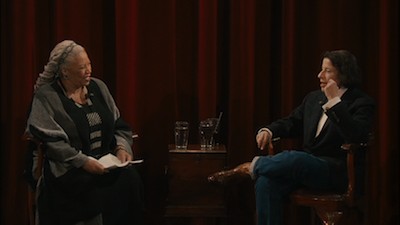