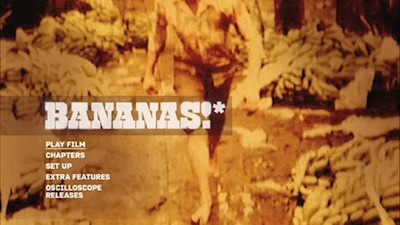 If you clicked on this link looking to read about the old Woody Allen comedy Bananas, you're totally in the wrong place. Instead, this is Bananas!*, with an exclamation point and an asterisk. Bananas!* is a very serious documentary by Swedish filmmaker Fredrik Gertten about an ongoing legal battle between 10,000 Nicaraguan field workers and the Dole Food Company regarding the long-term effects of being exposed to pesticide. In specific, Bananas!* follows one 2009 case being tried in Los Angeles involving a dozen men who swung a machete for Dole in the 1970s. It's a pilot case to try to set a precedent for the class action to follow. The machete men were exposed to the chemicals the least of anyone; if they can prove their grievance, the rest will be easy.

In focusing on this one particular effort, the filmmakers behind Bananas!* are attempting to do the same thing the lawyers in the matter are trying to do: take something that is large and unwieldy and make it small. The case revolves around a chemical pesticide called DBCP. More commonly known as "Fumazone" or "Nemagon," the manufacturers of this pesticide, Dow Chemical, told their clients to stop using it in 1977 when they discovered it lead to sterility in men. By their own admission, Dole kept using DBCP, even when countries all over the world were banning it. The result, the plaintiffs allege, was that thousands of Nicaraguan men were rendered infertile. Given their distance and resources, however, fighting a multinational corporation to prove these allegations has been difficult.

Enter Juan Jose Dominguez. His TV commercials and bus ads make Dominguez look like your clichéd ambulance chaser, but the Cuban immigrant is actually a passionate defender of the little guy. Five years prior to this trial, Dominguez saw a CNN report on fumazone and decided he wanted to help. Teaming with Duane Miller, one of the leading anti-corporate lawyers in America, he set about to become the David that would take on the Goliath of Dole. Bananas!* chronicles how the pair gathers the witnesses, explores the evidence, and shows the courtroom feed as Miller argues his case. In a way, Miller is the business side of the relationship, whereas Dominguez is the PR man. Both serve their function, and at least in this portrait, both appear to righteously believe in their cause. Interestingly enough, that is the argument Dole's lawyer, Rick McKnight, makes to blur the facts: everyone here believes they are right, but who can prove they are more right than their opponent. 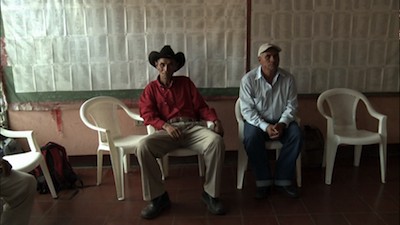 Though it's clear what side Gertten takes in the situation, Bananas!* avoids being a polemic. The victims get more airtime, to be sure, but when it comes time to enter the courtroom, Gertten shows both sides working their case. It's not overly dramatized, either; he shows most of the footage raw, pixilated in the same way that those watching it remotely from outside the courtroom would see it. This just reinforces that, for as humongous as the situation is, the true story is being played out on a very human scale. Instead of spending any extended time with the specific witnesses, Gertten gives us an individual connection by cutting in footage of a Nicaraguan family that lost its father to the banana plantations and whose mother is still wrestling with the effects of working on the packaging assembly line. Her sons struggle with their own future and question what kind of life they can find beyond picking bananas.

Bananas!* is a good story, one that touches on human rights, corporate responsibility, and even how our legal system does and does not work. If it has any fatal flaw, it's that sometimes it seems to circle the issues rather than really digging into each point. Here is a case where maybe some outside voices might have served to illuminate the more nuanced elements of the narrative. Likewise, given the murky legal waters of the trial's outcome, Bananas!* doesn't really present the viewer with enough information to fully choose a side. We know which part of the story resonates on an emotional level, sure, but since we aren't privy to the judge's instructions or any of the specific details the jury ends up debating, it's not that easy to come to terms with why they ultimately made the decisions they did (it was not a simple guilty/not guilty verdict).

None of this keeps Bananas!* from being a good film, mind you. There's too much in the understory that taps into the current zeitgeist about where our food comes from and the battle to keep corporations in check for it not to capture the attention of anyone out there who is even mildly interested in the direction society is taking. It's even quite possible that this is Gertten's intention: to poke the nest and agitate the wasps so that more people get involved. Bananas!* is certainly a documentary that inspires further exploration, and it could even use its own sequel. Dole's attempts to squash the movie before it premiered sound like they could be fodder for another movie all on their own. As the liner notes in this DVD release attest, the vigorous efforts to silence the filmmaker doesn't really serve as denial, it only fuels the fire that Bananas!* has started. 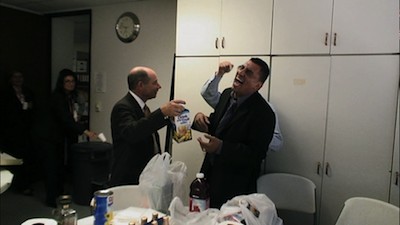 Video:
Bananas!* comes to DVD via Oscilloscope as a widescreen anamorphic transfer shown at 1.78:1. The image looks good, with strong colors and solid resolution. Some of the source material holds up better than others. Obviously, the courtroom material filmed on a webcam is not going to look as good as interview footage shot by Gertten or the same as archival material. That said, it all looks decent and there is an overall consistency to the DVD that suggests the studio has done a nice job of putting it together for home viewing.

Sound:
The audio is mixed in both 5.1 and stereo. It's a fairly straightforward soundtrack, so having the specs be so high is maybe a bit of overkill. The audio comes through clear, though, and without unnecessary or distracting noodling in the speakers.

There are optional subtitles in English, French, and Spanish. The English came on automatically to translate the Spanish portions of the film; they read clearly and were unobtrusive.

Extras:
Bananas!* is released in the trademark Oscilloscope trifold package with an outer slipcover. An informative essay by author Dan Koeppel appears inside the holder. 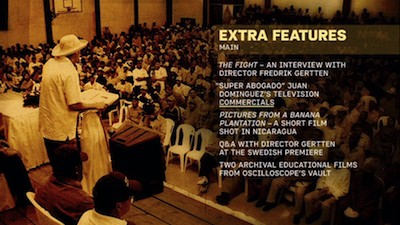 Director Fredrik Gertten sits down for a new interview (8 minutes, 31 seconds) and packs a lot of informative material into a short burst. The documentarian talks about his approach to making the film, why he chose Juan Dominguez to focus on, and some of the fall-out from the movie and the legal aftermath. Gertten also talks at more length about the film in a Q&A from the Swedish premiere (23:26).

Juan Dominguez's television commercials advertising his law firm add a little humorous color to the bonus section. Likewise, the short movie Pictures from a Banana Plantation (13:02), shot in Nicaragua, is included here with the intention of making us think more about where our bananas come from and who does the work to get them to our supermarkets. It's presented without commentary, however, so it's a little like watching a home movie. That said, banana harvesting is a lot more interesting and full of weird gadgets than you might think.

The disc is rounded out by some vintage educational shorts about bananas: the 1935 film About Bananas (10:46) and the 1950 travel movie Journey to Banana Land (20:41). The former is silent and in black-and-white, the latter has sound and is in color. It's interesting to see the different footage and how things looked in the industry during these different eras, and to contrast them with the more modern material. Of course, both turn into propaganda for why bananas are good for you. The later one even has suggestions for how to prepare them. Yum!

Finally, there is a gallery of Oscilloscope trailers.

FINAL THOUGHTS:
Recommended. The documentary field these days is flooded with political studies and exposés about corporate greed and the food we eat. Bananas!* fits snugly within that arena, but it's also its own thing. It's a human story about the motivations behind malfeasance on a grand scale and the difficulties of challenging one of the largest global fruit growers when they've done wrong. Though at times you may wish Swedish director Fredrik Gertten would have gotten more specific or reached beyond the small scope of the immediate case, Bananas!* is still a thought-provoking start to what should be a larger debate. The packaging and the extras on the DVD are also thoughtful and elegantly produced. Another winner for Oscilloscope Laboratories.