"None of her music's reflective of how weird she wants to be or thinks she is." - M.I.A. on Lady Gaga 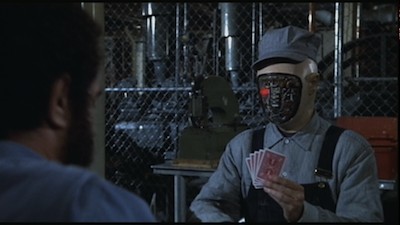 Yeah, I know. It's weird to start a movie review with a quote from one musician critiquing another, but I've always found M.I.A.'s assessment of Lady Gaga to be particularly insightful. The full statement is actually defensive of Gaga and her ability to both mimic better artists and market herself, but I think this one line more accurately gets to the root of what is wrong with Gaga's music than any equivocation can dismiss.

It also came to mind when watching Futureworld, the 1976 sequel to Michael Crichton's Westworld, a 1973 movie about a theme-park planet where rich businessmen go to pretend they are cowboys. That movie, using a story structure that Crichton would later recycle more effectively in Jurassic Park, was about what happened when the perfectly designed robot outlaws turned on the humans they were created to entertain. Its follow-up, which didn't involve the original author at all, attempts to address what might happen next. How would a mega-corporation go about dismissing the public relations disaster of the attractions murdering the spectators paying to see them?

The answer is to up the stakes. It's the epitome of the sequel disease. In Westworld, the company offered a virtual tour of history: you could choose between three theme parks simulating an era long past. Romeworld, Medievalworld, and Westernworld. In Futureworld, they have discarded the wild west in favor of a new third option--everything that could be coming tomorrow. Now, those with the cash can go into "space." They can fly in a rocket and ski on the surface of Mars, an adventure safely guided by smoke and mirrors and sophisticated robotics. 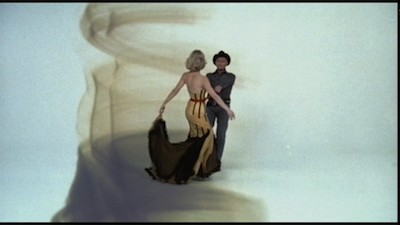 Helmed by television director Richard T. Heffron, Futureworld stars Peter Fonda and Blythe Danner as two reporters granted full access to the reopened vacation spot. Fonda plays Chuck Browning, the print journalist who exposed the Westworld tragedy, and Danner is Tracy Ballard, his rival from television news. Tracy is ready to write a puff piece about Futureworld, but an informant has told Chuck to be more suspicious of the high-tech resort. The snitch's murder only confirms the veracity of his story. The two reporters join a group of international diplomats, as well as one gameshow winner, to explore the new Futureworld, Medievalworld, and Romeworld. Will they have a good time, or are there dark secrets waiting to be uncovered?

The fun of old science fiction is to go back and see how previous generations envisioned the future. For as far-fetched and ill-conceived as much of the technology in both Futureworld and its predecessor, Westworld can be, the one thing they got right is how quickly technology would advance and what useless accomplishments this advancement would spawn. Futureworld is full of prescient ideas, from the animated chess board (here brought to life by actors pretending to be holograms) to the Wii-like boxing game. Advanced electronics have largely been applied to create glitzier modes of entertainment. The futurists of 1976 may not have been able to envisions how small and refined our new devices would be, but they certainly understood that new gadgets would likely be geared toward our pleasure centers and our vanity. Though nothing is really done with it, there is a brilliant scene buried in Futureworld where two married, older visitors engage in a "Fountain of Youth" scenario. They are hypnotized into believing they are younger, rekindling their physical passion for one another. Nowadays, they would just use plastic surgery, though the illusion would be far more grotesque and, thus, harder to believe. Also right on the money: the gameshow winner advances the notion of the common man gaining access to a world beyond his means via television long before reality TV was even a twinkle in some greedy exec's eye.

There are quite a few trippy scenes in Futureworld. In one, a maintenance man plays poker with a faceless robot. In another, Blythe Danner is ravaged by Yul Brynner, reprising his role as the mechanical gunslinger from Westworld for an odd cameo in an elaborate dream within a dream that kind of predicts Christopher Nolan's elaborate Inception mindscapes. The problem is, for as outrageous and cool as these bits and pieces can be, they are merely bright spots in what is otherwise a B-movie through and through. Slow paced and poorly acted, Futureworld is an awfully rotten original movie and an even worse sequel. Which isn't to say Westworld was any good, it's actually a plodding, dull yawn. Rather, I'm pointing out that Futureworld suffers from that common error of sequels: it tries too hard to up the ante. For as flawed and boring as Westworld was, Crichton kept it simple. The plot was not even remotely complex, comprised of three distinct, uncomplicated narrative acts. We travel to Westernworld, get to know how it works, and then it all falls apart.

For Part II, screenwriters George Schenck and Mayo Simon try to raise the game. The Futureworld plot jettisons the man vs. machine theme and replaces it with a greedy corporation that sees political dominance as a way to bury their malfeasance. If they control the world governments, there will be no one to punish them if their androids go nuts and start killing humans. In this, the movie is also well ahead of its time. Trust me, if corporations could create today's leaders in a Petri dish, they would. The problem is, such complicated motivations do little to improve what should be a fairly straight-forward sci-fi action piece. These narrative contrivances just gum up the works. It's like a special effects version of Playboy where all the pesky articles get in the way of what we really want to see.

Or, to take it back to the whole M.I.A. vs. Lady Gaga thing, Futureworld is a movie that wears a lot of outlandish clothes, but it does so to go to places that aren't even close to being as interesting as the costumes. The movie is outfitted for the insane asylum, but in actuality, we're just visiting a creative writing class full of high school freshmen. 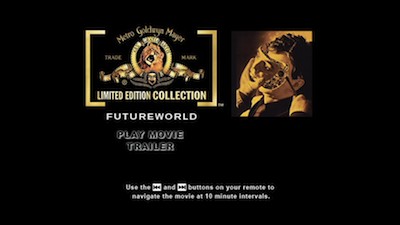 Video:
Futureworld is released as part of MGM/Fox's DVD-on-demand program, and so is packaged as a blue-backed DVR. Surprisingly, the widescreen transfer is very good. It is a clean print with strong colors, though lacking in the sharpness we might expect from a regular DVD release. The look of the digital transfer accurately reflects the film stock of the 1970s, and so its softness actually creates the right kind of nostalgia. Fans of the movie willing to go out of their way to get their hands on this, I think, should be pleased.

Sound:
The stereo mix of the original soundtrack doesn't have much high-tech polish, but it is clean and absent of any hiss, stray noise, or tonal problems. It sounds good and clear and never gets distorted even when turned up loud.

Extras:
Only a theatrical trailer is included.

FINAL THOUGHTS:
Rent It. Futureworld is a solid B-movie. It's not very good, nor is it really terrible. It makes use of its limited means to strive for big ideas that it can't quite achieve, and the movie ends up being oddly charming as a result--particularly when you consider that Futureworld represents what people thirty-five years ago were guessing our lives might be like today. (They weren't entirely out of bounds, either.) The pacing is totally wrong, and the story complications in the third act only serve to drag the film down--as do the bad performances from Peter Fonda and Blythe Danner in the leads--but there is still some fun to be had by the crazy ideas the filmmakers came up with. If only the movie had the creative insanity to keep that nutball tone throughout, it would be something else entirely. 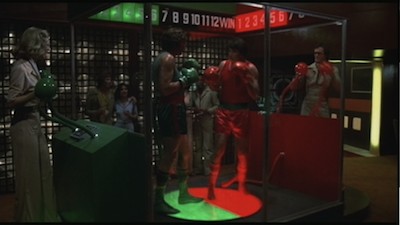