Universal // G // April 5, 2011
List Price: $26.98 [Buy now and save at Amazon]
Review by Stuart Galbraith IV | posted April 13, 2011 | E-mail the Author
A real sleeper that surprised audiences with its wry wit and gentle charm, Babe (1995) is a genuinely sweet film, and its success - including an Academy Award nomination as Best Picture - begat dozens of imitators, none nearly as good.* Adapted from Englishman Dick King-Smith's 1983 novel The Sheep-Pig (rechristened Babe: The Gallant Pig in the U.S.), Babe is very much like a live-action version of E.B. White's Charlotte's Web, which was itself adapted into a Babe-type film in 2006. So good is Babe that it's easy to forget or forgive the stories' many similarities: lonely runt piglet befriends farm animals of other species, that in turn help him from becoming his owners' Christmas dinner.

Babe was first released to DVD in 1997, but that was a fullscreen-only edition, though a widescreen transfer debuted six years later. Universal's new Blu-ray release offers a decent transfer but no new extra features, unless you count BD Live and "pocket Blu" applications. 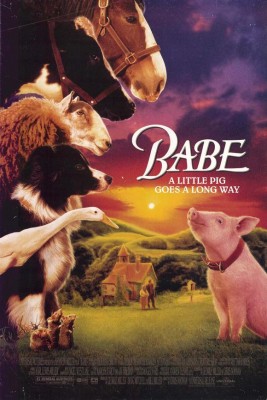 Narrated, wonderfully, by Roscoe Lee Browne, Babe follows the adventures of a piglet after his mother abandons him for pig paradise (i.e., is taken away to be slaughtered). Sheep farmer Arthur Hoggett (James Cromwell) wins Babe at a county fair, and he tries his best to fit in with the other farm animals. But the little pig is unaware that Esmé (Magda Szubanski), Arthur's wife, is already making plans for Babe as guest of honor for Christmas dinner.

Meanwhile, Babe (voiced by Christine Cavanaugh in a memorable, sweet performance) becomes friendly with Fly (Miriam Margolyes), the Border collie mate of territorial Rex (Hugo Weaving). The two dogs lord over the Hoggett's sheep herd. The gentle, somewhat naïve Babe wants to join them in their duties, oblivious of the farm's pecking order and rigid species segregation, yet he gradually wins the hearts of his animal friends and human owners alike.

An Australian-U.S. co-production mainly produced by Kennedy-Miller, the folks responsible for the "Mad Max" movies, Babe was filmed in New South Wales. The movie is deliberately vague about its setting, a la the 1971 film of Willy Wonka and the Chocolate Factory, which had been filmed in Munich but populated mostly with American and British actors. The architecture and costumes suggest the British countryside, while Cromwell and most of the voice cast speak with American accents. Australian co-star Magda Szubanski, in fact only in her early-30s at the time, along with the other native Australians in the cast speak with unusual accents that definitely aren't Australian but not quite American, either. The license plate on farmer Hoggett's truck and other clues are similarly vague.

Babe bowled over audiences, so much so that for one friend of this reviewer Babe serves as a kind of litmus test: if you don't like Babe, according to her, then there's something seriously wrong with you. I wouldn't go that far, but I've also yet to meet anyone that didn't at least enjoy the film.

Babe works well partly because it strikes a perfect balance between anthropomorphisizing the farm animals while staying true to the basic characteristics of their species. They talk like human beings and share many human concerns yet are definitely still animals, not human characters with animal bodies like, say, Jiminy Cricket or Bugs Bunny. Nor does the film dodge the realities of farm life: pigs and ducks are raised to be eaten. In a heartrending scene, Fly is honest with Babe admitting that, yes, probably Babe's parents and all his siblings were eaten by man, and that even kindly farmer Hoggett eats pigs, too.

Another reason the film works is because everything is understated. Though Farmer Hoggett's idealized rural English farm had to have been an expensive set, it's not overdone in the Tim Burton manner, nor is any special attention paid to its slightly unreal quality. Similarly, the animals' "performances," actually a combination of puppetry (some provided by Jim Henson's Creature Shop), real animal actors, and animation (to match the dialogue with their lip movements) is pretty seamless precisely because the technical wizardry isn't emphasized.

James Cromwell, the son of director John Cromwell and actress Kay Johnson, had been kicking around Hollywood for more than 20 years when his contrasting roles in Babe and L.A. Confidential (1997) deservedly made him a money-in-the-bank character star.

Definitely an upgrade from the standard-def DVD, Babe (1080p, 1.85:1) looks fine generally throughout, though as with effects-heavy movies from the period, it's a bit grainy because of all the optical effects, some like a clever matte shot near the climax barely perceptible but which add to the grain. Mostly though, a lot more detail and richness in the color is plainly visible, an improvement over most 35mm theatrical prints of the time. The audio, DTS-HD Master Audio 5.1, comes alive now and then, especially in terms of Nigel Westlake's lovely score. 5.1 DTS Surround tracks in French and Spanish are also available, as are optional English SDH, Spanish, and French subtitles.

Supplements are limited to previously released material in standard-def: "The Making of Babe" featurette, and an interview with co-producer/co-screenwriter George Miller, who also provides an audio commentary. Director and co-screenwriter Chris Noonan is conspicuously not front-and-center in these supplements.

Time hasn't diminished Babe's considerable charm, and my three-and-a-half year old was for the most part enchanted. (Though rated "G" parents may want to preview the distressing first reel of the film before watching it with smaller children.) Highly Recommended.

* The incredibly grating Aflac Duck, until recently voiced by Gilbert Gottfried, was clearly inspired by Ferdinand, the similarly-voiced duck in Babe that pretends to be a rooster in hope of being spared the ax.