No, that's not the dialogue of two bored teenagers who've just discovered black turtlenecks and Edith Piaf. It's an exchange between a thrill-seeking gambling addict and the yakuza who loves her, the main characters in Pale Flower, Masahiro Shinoda's 1964 portrait of underworld ennui. These are doomed souls on a collision course with one another, an interpersonal big bang that can only spell their tragic end...though, as the poem goes, it's an end that will merely whimper. It's an implosion more than an explosion.

The dual nature of Shinoda's scenario is established from the very first scene. In voiceover, the hardboiled criminal Muraki (Ryô Ikebe, Early Spring) quickly explains that he has only just gotten out of prison after serving three years for killing another man. The whole sordid affair has left Muraki with a particularly nihilistic worldview. He took a man's life, but the rest of the world carried on. Life is indifferent to those who live it. Yet, the moment that Muraki lays eyes on Saeko (Mariko Kaga, Snow Country, Only on Mondays) in the gambling den, the gangster endeavors to change her fate and keep her safe. He is an ex-con white knight, swooping in to protect the fair maiden. He jumps in the game, interrupting her losing streak by starting one of his own. If only one of them can win this bet, it might as well be her.

The pair develops a relationship after that, though it's one that is never sexual. Saeko sees Muraki as her entry into higher-stakes games. Whatever life she has outside of the late-night gambling, she keeps it separate. We can guess she's probably from a respectable family well before Muraki accidentally runs into her with her friends. This is a girl of privilege with a yen for danger. She ponders bigger bets hoping that they will give her even more of a jump, she races other drivers on the highway, and naturally, when she hears the half-Chinese gangster Yoh (Takashi Fujiki) is a junkie, she becomes fascinated by him and his deadly habit. Muraki, resigned to the role as the "older brother," warns her against going on the dope, but even he knows it's pointless.

Because, though he may forget, it's all pointless. Symbolically, Muraki is a man whose time is limited. The lover who waited for him all these years (Chisako Hara) is our first indicator that the clock is ticking--in her case, quite literally. Her father owns a clock shop, and when Muraki returns to her, the persistent metronomic clatter serves as soundtrack to their lovemaking. This has been the woman's jail while Muraki has been behind bars; her life has been in stasis. Her devotion has also been a waste. When a fellow from her office offers to marry her, Muraki tells her to go for it, to take the normal life while she can. Perhaps he's trying to save her, too, but of anyone, she seems most aware of the troublesome mortality that defines their romance.

Indeed, Muraki is going to get a reminder that his position is tenuous in the very next scene. A friend of the man he killed tries to take revenge, even though the rival gangs have formed a truce since Muraki went inside. Ironically, Muraki takes the younger man (Isao Sasaki) under his wing after this, prepping him for greater things. Shinoda underscores this fateful first meeting with a subtle orchestral version of the Elvis Presley song "It's Now or Never." Live for the moment, Muraki, it's all you have.

Music plays an important role in Pale Flower. Shinoda and composer Toru Takemitsu draw on a variety of influences to establish the story's various moods. At one of the more crucial nights out, the game where Muraki realizes that Yoh is a threat, the soundtrack adopts more traditional Japanese sounds. Dissonant horns and chaotic percussion, combined with the ambient noise of the game itself, create a feverish mood, reducing the players to their most primal equation: Adam, Eve, and the Snake. This will be reinforced in the film's climactic scene, when the operatic events demand operatic music. Shinoda has given us various hints throughout Pale Flower that a shift toward more Western ethics and behavior is occurring, and here, besides, the music, the church-like decorations emphasize the particular moral landscape of this scenario. Muraki hopes to dissuade Saeko from chasing her various metaphorical dragons any further and simultaneously defeat his rival by showing her the one thing he believes Yoh can't conjure. In a way, it is the ultimate sacrifice he can make: he isn't literally giving up his life for her, but he is giving up his freedom, which itself will consign him to a kind of walking death. Still breathing, but exiled to purgatory.

It's a gamble, but then, the whole of life is a gamble. The game of luck that Saeko and Muraki play is one of pure chance. The players randomly draw hanafuda, colorful dominoes with pictures on them, and place wagers on whether or not they will draw a match to the domino played by the lead gambler. It's a conundrum we regularly take in life: if I put myself out there, will this other person match up, will we be compatible. For Saeko, Muraki is a new kind of danger. She tells him at one point, "I'm so bored with life," and she uses him to find fresh excitement. What he sees in her glass-eyed expression is something only he knows. Maybe it's a kindred spirit, maybe it's himself as he once was, making her his second chance. Regardless, he's foolish to think it will make any difference. She so much as warns him. "Whatever happens, I forgive myself," she says. In other words, she lives for her own sake first, and whatever she has to do to bring herself whatever pleasure or contentment she can find, she'll do it, anyone else be damned.

It's enough to make you wonder who the real nihilist is here! Pale Flower's philosophical landscape is as desolate as any American film noir, and its actual landscape is shot with just as much of an emphasis on style and shadow. The black-and-white photography of Shinoda's regular cameraman, Masao Kosugi, plays with light and dark, shooting down narrow corridors, highlighting the distance between the dens of inequity and common life outside. Much of the action takes place on location, and so we also get stunning images of 1960s Tokyo, which at times can seem as unreal and dreamy as the paranoid nightmare Muraki has midway through the picture. This glimpse inside his sleeping mind is the only time we see Muraki truly unhinged; otherwise, Ryô Ikebe plays him as stoic and contemplative. His exterior expression is his most fundamental weapon, he can never let his true feelings show. In this, Mariko Kaga is his equal. The actress is just as strong at establishing a fictional mask--though she is also allowed brief bursts of devilishness. At one point, just before her high-speed drag race, the pair laughs together; after the race, she laughs alone, and it has a completely different pitch. It only grows darker later, when her giggle turns a sexual charade into a humiliating experience for Muraki.

In the end, Muraki is an anti-hero who can't escape his destiny. Whatever he thought he was going to accomplish turns to dust, his endeavors are as pointless as his denials. Arguably, his exile is far less of a punishment than it might seem, because being cut off from everything means he doesn't know how colossal his failure may actually be. That's the haunting coda of Pale Flower: awareness of life's absurdity brings no relief. Unlike Western existentialism, where one hurls oneself into the abyss in order to transcend it, the deeper Muraki peers into the blackness, the more it consumes him. He pushed his rock up the hill, rolled it over the other side, and now he only wants to get it back. 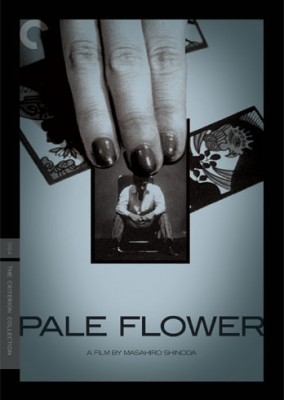 Video:
The new high-definition 2.35:1 transfer on this Blu-Ray release of Pale Flower is flawless. The resolution is sharp as a razor, and the tonal values of the black-and-white image are wonderful. Quickly comparing it to the fairly good Home Vision Entertainment DVD release that came out in 2003, this new transfer has a greater clarity and more defined grays, whereas the previous disc had heavier blacks that obscured some of the detail. The new Criterion achieves a bolder picture without resorting to any enhancement, and the print is absent of any scratches, dirt, or other damage.

Sound:
The uncompressed monaural soundtrack is also nicely balanced and free of any glitches. Music and dialogue trade off well, and there is even some good ambience, including an excellent mix on the scenes in the rain.

The optional English subtitles are rendered in white and easy to read.

Extras:
As per usual, Criterion leads with an interior booklet complete with credits, photos, and an essay by critic Chuck Stephens. Chapter breaks are printed on the inside front cover of the disc.

There are two extras on the Blu-Ray itself. The first is a 2010 interview with Masahiro Shinoda (in case you can't tell from the date, it's different than the one on the HVE disc). Running just over 20 minutes, it gives the director a chance to reflect on the production and give viewers some context to how it all came together.

The selected-scene commentary on the movie covers five scenes in total, just over half an hour. The track is recorded by Peter Grilli, an expert on Japanese cinema and a producer of a film about Toru Takemitsu, who composed the music for Pale Flower. Thus, the commentary focuses on the maestro's work in the movie, dissecting the musical technique and the impact of his choices.

A theatrical trailer is also included.

FINAL THOUGHTS:
Masahiro Shinoda's Pale Flower is a dark crime picture, rendering a nihilistic philosophy with an impeccable aesthetic to create a thoroughly involving noirish parable. Starring Ryô Ikebe as a tight-lipped gangster and Mariko Kaga as a gambling-addicted girl searching for ever-more thrills, Pale Flower weaves a tale of quiet passion and tragic destiny. The movie is constructed flawlessly, complete with nuanced performances and music that evolves to fit the mood, and this Criterion Blu-Ray has been produced with that same meticulous attention to detail. Highly Recommended.