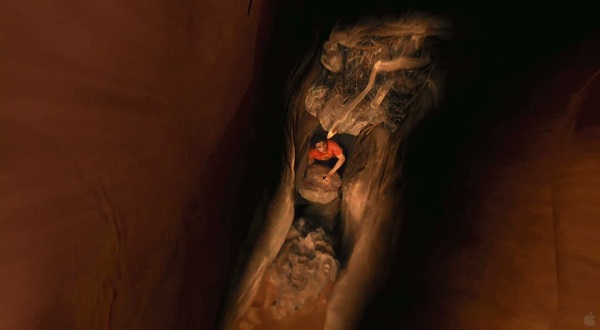 127 Hours has a true-life plot that would have appealed to Antonioni, but the film is shot through with hyperkinetic visuals that recall Oliver Stone in the 1990s and director Danny Boyle's own hit, Trainspotting. Although the content and the form don't always interact happily, James Franco gives an energetic and layered performance as Aron Ralston, an amateur outdoorsman and rock climber who, in 2003, became trapped in a Utah canyon when a boulder came loose and pinned his right arm to the rock wall.

Boyle and co-writer Simon Beaufoy had a number of challenges before them in selecting Ralston's story as a film project - in fact, it almost looks as though they specifically chose the story for its seeming plethora of anti-cinematic qualities. One thing they had working against them was the broad media saturation of Ralston's story. At least in the United States, virtually everyone with functioning senses had learned of Ralston and the broad outlines of his story within days of his escape. Another factor that would have made many other filmmakers turn away from Ralston as a feature subject is the relative simplicity of his tale. Ralston went out into the wilderness alone, became trapped for five days, and finally cut off his own arm to make a successful escape. Beyond those bare facts, there is not much incident and only a very few supporting characters.

Boyle and Beaufoy's success in 127 Hours is in crafting the film's story as a running expression of Ralston's mental and emotional state, his perceptions, his daydreams, and his memories. Wherever Ralston's thoughts go - whether backward into memory, forward into desire and premonition, or rooted in the dire present - the film follows swiftly and surely. The filmmakers are aided immeasurably by Franco's deft, fluid performance. He plays Ralston with a goofy, dorky energy in the film's opening segment, but that modest cockiness gives way to a transcendent sense of his own isolated smallness as doom seems to close in. Somewhere within that isolation Ralston found a force of will that shattered his transitory terror to smithereens. The flux of Ralston's state of mind is the film's - and Franco's - triumph.

But within this effective storytelling approach, Boyle too often reaches for stylistic flourishes that take away from the simple, stark, powerful idea that holds the whole thing together. The camera is too active. Cutting is too rapid and flashy, with an annoying panoply of optical and other effects taking away from the human struggle at the film's center. Although narrative devices such as flashback, dreams, and visions are deftly executed, other visual tricks - including a rather repetitive Fincheresque dependence upon being inside of things such as Ralston's water bottle, camera, and even his doomed arm (!) - are distracting and subtractive instead of additive.

The penultimate sequence involving the fate of Ralston's right arm is as tooth-gnashing as one might imagine, but it is also assembled in a way that avoids unnecessary graphic detail. The deed is indeed carried out with a determination and force of will that never once appears desperate. We see Ralston toy with the idea of severing his arm earlier in the film - both he and we know what has to come. (Despite the relative restraint of this sequence, the person I watched the movie with - and who declines to be identified - wound up tossing her cookies anyway.)

Image and Sound
As is their usual practice, Fox sent a DVR screener that does not reflect the final product. Until DVD Talk receives a retail copy of the disc, we cannot comment upon the technical aspects of this release.

Bonus Content
Although it is uncertain as to whether this reflects the final release version of the extra content, this disc contained a commentary track with Boyle and co-writer Beaufoy, as well as a set of deleted scenes.

On balance, 127 Hours is a searching, inventive film occasionally hamstrung by its own ambitions. Franco's performance is admirable and driven. Despite seemingly unfilmable true story that is its basis, 127 Hours will stay with you not necessarily as a story of survival, but as a story of a harrowing interior experience. Although I cannot speak to the technical aspects of this Fox release, the film itself is most certainly recommended.