Who Took the Bomp? Le Tigre on Tour 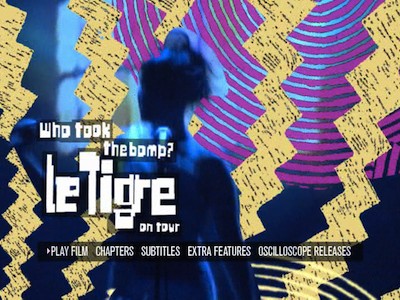 One of the first scenes in the concert documentary Who Took the Bomp? Le Tigre on Tour features band member J.D. Samson in her hotel room in Australia making fun of the description of the group in the program for the festival they are there to play. This makes writing my own explanation about what Le Tigre sounds like a little daunting. But then, I supposed if any of the three-piece rock outfit wants to take the time to crack wise about my prose, I should take it as a compliment.

Le Tigre took life in the late 1990s. It was formed by Kathleen Hanna, best known as the front woman for the influential riot grrl band Bikini Kill, and also by her alter ego Julie Ruin. On the latter album, she moved from the shouty punk aesthetic of her first band into more experimental electronic sounds, playing around with samplers and keyboards. When she got together with Johanna Fateman to start mapping the course of Le Tigre, this approach informed the sound of the new endeavor--a mixing of punk and electro to create a fresh aesthetic using available DIY technology. The band's lyrical focus was as politically minded as Hanna's had always been, tackling feminist topics, embracing queer culture, and confronting the prejudice of modern society.

Who Took the Bomp? Le Tigre on Tour follows the band on their 2004 world tour promoting their last album, This Island. Samson had joined Le Tigre by this time, adding a new voice to the mix. Described in that ridiculed blurb as "the dyke with a moustache," Samson is a far more complex presence than such a simple distillation would suggest--which is part of the Le Tigre message. Simple definitions are not suitable for complicated ideas, and all humans are nothing if not complicated ideas.

Directed by Kerthy Fix, who was also behind the recent Magnetic Fields documentary Strange Powers, Who Took the Bomp? is, in a lot of ways, a standard rock 'n' roll documentary. Fix compiles multiple performances to create collages of different songs and then splits up the tunes with tour footage from backstage, at the hotel, and on the tour bus. The trio also sits down for separate interviews some time after the completion of their final 2005 show in New York to look back at the experience and also lay down their point of view. Le Tigre was dedicated to two things: entertaining their fans and expanding the social consciousness.

This is also where Who Took the Bomp? Le Tigre on Tour distinguishes itself from most "party on the road" movies: the band has something to say and they will never let the message get ground up in the hype machine. We even see this in action when Jane Magazine gets cold feet about using the word "lesbian" in a promotion involving the band. Le Tigre has to decide whether the advertising is worth sacrificing an ideal; ultimately, the answer is "no." As a musical unit, the three-piece has no clearly defined roles. Though Hanna is often pushed to the foreground by other media portrayals, not so here. Just as onstage they switch instruments and take turns at the microphone, so too does Fix give each band member her specific spotlight. You'll leave Who Took the Bomp? with at least some understanding of all three musicians and where they come from.

It's hard to find much specific fault with Who Took the Bomp? Le Tigre on Tour. Fix delivers the music and also the personality of the band. Whether you are already a Le Tigre fan or if you are hearing their material for the first time, you can watch and enjoy this movie, Fix begins on a very level playing field. I suppose any dissatisfaction I might feel is from the fact that no clear narrative emerges, even though the band was on what turned out to be a specific trajectory. There's something perfunctory about how Fix sifts through the material that keeps Who Took the Bomp? from becoming truly special. Though it works for what it is, I can't help but think the full impact of Le Tigre--as well as Kathleen Hanna across her entire career--has yet to be explored. 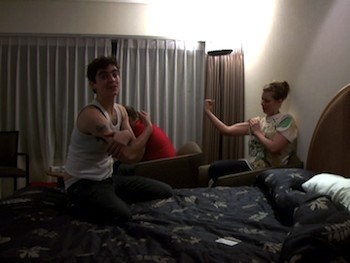 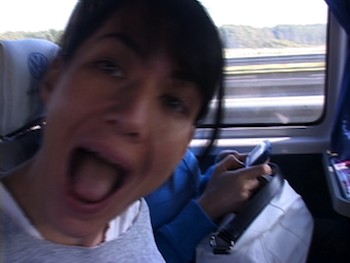 Video:
Who Took the Bomp? Le Tigre on Tour is presented on DVD as a full frame image with a 1.33:1 aspect ratio. The overall picture quality is excellent, with clean footage from the road edited together seamlessly. Resolution is strong and colors look great.

Sound:
The stereo audio mix does a good job of presenting the documentary footage and making it so both dialogue and the songs are audible and clear (and when it's not, there are subtitles). There isn't much atmosphere, though, and the music is presented a little too straight. Though the video combines many different performances, the soundtrack for each song is culled from one recording, and the rough edges are smoothed out in such a way that the live energy is drained. It's fine, just a little too clean.

There is also a full subtitle option.

Extras:
As with all Oscilloscope releases, the first extra is really the package. Who Took the Bomp? Le Tigre on Tour comes in an awesome two-piece cardboard case, fully illustrated inside and out by Anne Higgie. The interior also has liner notes by writer Matt Wolf. 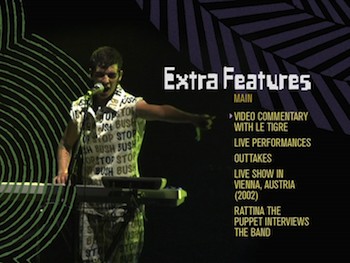 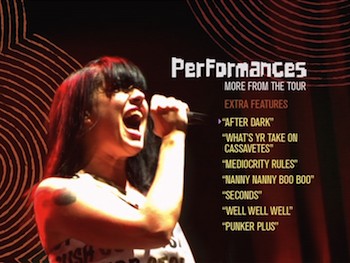 The disc itself is packed with extensive extras, including a bounty of music. Fans will appreciate a full, single-camera recording of a 22-minute live set from 2002, as well as seven bonus performances from the 2004 tour. Those seven extra songs are "After Dark," "What's YR Take on Cassavetes," "Mediocrity Rules," "Nanny Nanny Boo Boo," "Seconds," "Well Well Well," and "Punker Plus." I wish there was a "play all" function for the songs, but it's not a big deal.

Another vintage piece of footage features the band giving a short interview to Rattina, a hand puppet, for a Chicago cable access show in 2001. It's pretty cute, and it's obvious even then how much Hanna is giving the spotlight to her bandmates.

There are two outtakes from the movie. One is a short clip with Johanna talking about a PETA ad the band is going to do, and the other is footage of J.D. reading a fan letter.

Finally, the band has recorded a commentary of sorts. It's called a "video commentary," but it's really 28 minutes of the women sitting in front of a laptop and looking at some of the footage and reflecting on it. It's actually nice because it adds more context and history, filling out some of the Le Tigre backstory. They talk candidly about certain scenes and why they did what they did, what they were reacting to, etc., and add a lot of new anecdotes.

FINAL THOUGHTS:
Recommended. Who Took the Bomp? Le Tigre on Tour is a fun and informative portrait of the influential electro-punk band on their final world tour. The songs get a great showcase and the personalities of the musicians and the ideals they put in their art really come through. It's a little short and could have stood even more context and behind-the-scenes analysis, but the extensive DVD supplements--including quite a bit of bonus live footage--goes a long way to filling in what's missing. Who Took the Bomp? should appeal to both fans of the bands and the uninitiated alike. 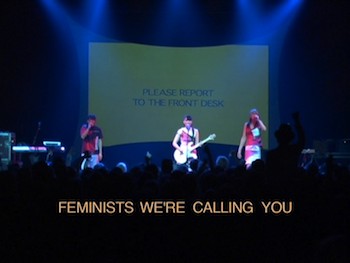 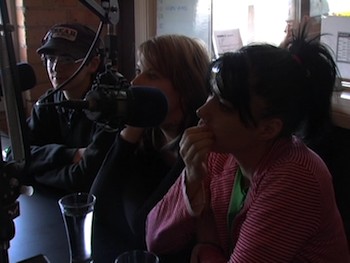