Against all logic, against all reason...I...laughed. And I don't care who knows it. Warner Bros.' fabulous mail-order M.O.D. service, the Archive Collection, has released yet another Hanna-Barbera Classic Collection treasure: Jabberjaw: The Complete Series, a four-disc, 16-episode collection of the popular ABC Saturday morning cartoon that originally ran from 1976 to 1978. No extras here, but H-B completists will enjoy this spectacularly stupid, silly...yet somehow funny little Ken Spears/Joe Ruby knock-off. 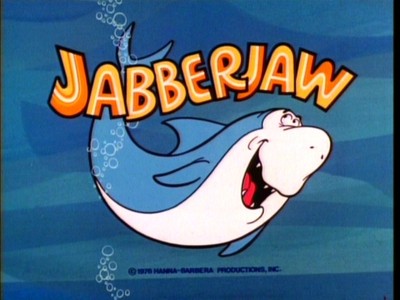 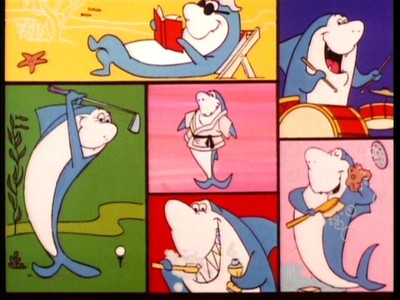 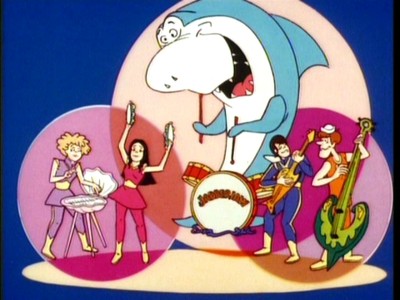 Look...what can I say about Jabberjaw? I'm not going to spend too much time on it...because there's not enough to it to merit a lengthy defense. Created by Scooby-Doo, Where Are You?'s Joe Ruby and Ken Spears (as well as the Scooby knock-off, Josie and the Pussycats), Jabberjaw is nothing more than a copy of a copy, aping Josie's rock-group construction, and Scooby's adventure-solving quartet, complete with anthropomorphic lead animal. Further diluting any originality in Jabberjaw's premise is the lead character's obvious nod to no less than three pop icon influences from 1975-1976: the theatrical smash-hit Jaws, which sparked a frenzy of interest in all things shark-related; The Three Stooges, here specifically Curly Howard, whom Frank Welker...how shall we say this...directly ripped off; and to a lesser extent, stand-up comedian Rodney Dangerfield, then just emerging from obscurity due to his appearances on Saturday Night Live. When Jabberjaw whines and chortles like Curly Howard, right down to his patented "Nyuck, nyuck, nyucks!" and his "Why, I oughtas," before intoning part of Dangerfield's signature line with, "No respect!", as he chases around with the Scooby gang―I mean the Pussycats's gang―I mean The Neptunes...well, this ain't the first time at the well for ol' Jabberjaw. 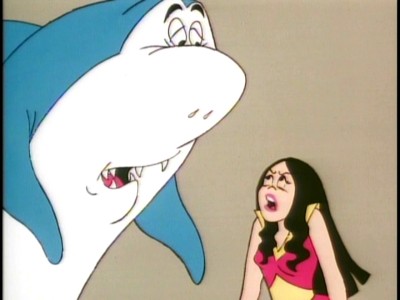 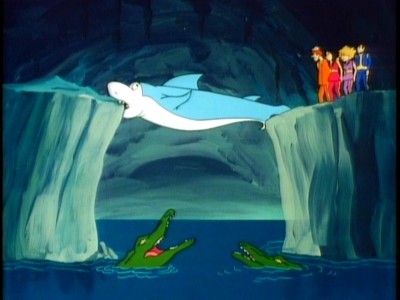 So Jabberjaw should be a grind, right? After all, this was that horrible time-frame for Hanna-Barbera where knock-offs and TV-inspired toons ruled their roost, and where their quality of animation quality, as well as their gags, were falling off at an alarming rate. And the premise is just...well, it's stupid. I mean, one minute they're all crammed into a too-small submarine type-thingy (why can't Jabber just swim alongside?), or they're running around corridors, with Jabber's small, joined tail fins doing remarkable work as legs and feet, before some Ming the Merciless clone fires shrinking rays at them, before the exact same song snippet about "cruising" somewhere incongruously plays from one episode to the next, before Jabber goes from coward to hero, while you try to remember just what the kids' names are in the band. I mean...this is not a good cartoon by any means. It's highly derivative, and sloppily constructed, and it's the same show, man, episode after episode after episode. 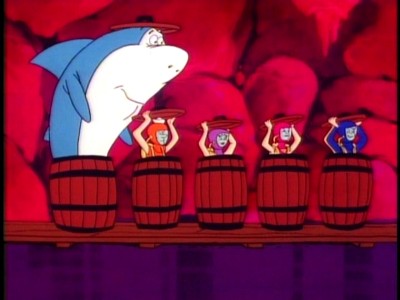 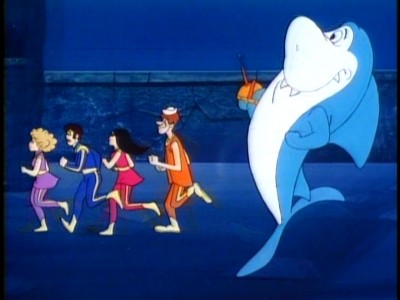 So why was I laughing along with my kids? Hard to say. First off, at least from their perspective, they don't know "good" Hanna-Barbera from "bad" H-B―and neither did we back when we were kids. The show's on, and it has a silly shark in it who sounds like Curly, and the action is fast, so...what's not to laugh at? They stayed for an episode or two before they got bored and moved off...just like we did during our four hour windows in front of the tube on Saturday mornings way back in the 70s and 80s. They don't see Jabberjaw as something to be commented on or studied or critiqued; it's just a cartoon, and it's either funny or not, regardless of its time-frame or any supposed "historical significance" (which they're not aware of, either). They can see it a lot more "purely" than I can, because I carry around the baggage of millions of hours of that crap from my childhood. Jabberjaw was designed strictly for kids (my old man wouldn't have been caught dead watching Saturday morning cartoons―guys were different, then), so on that basis alone, Jabberjaw works precisely the way it was intended to do 35 years ago: it passes the time, amusingly enough, for a kid tuning into it. 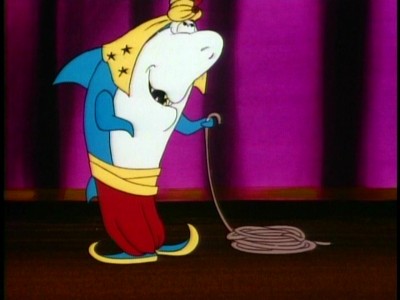 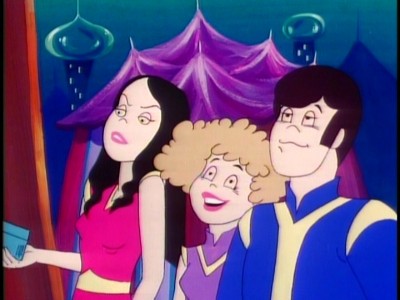 As for an adult watching Jabberjaw today, and even more so―for an adult who has to review Jabberjaw―your mood at the time of viewing is going to determine about 90% of what you're eventually going to write. I could have come at Jabberjaw ticked-off at the mailman, or perhaps I could have watched it after viewing some superior Looney Tunes efforts, and absolutely destroyed it in the comparison. Instead, Jabberjaw caught me on a good Saturday morning when I was receptive to it for just what it was, and so, occasionally, I cracked up. Nothing more; no fall downs, no belly laughs. Just a consistently good feeling about the show as I laughed here and there. The title song is half the fun, really; there's a crazy silliness to the lyrics and the singing that I found quite funny, with that last emphatic exclamation, "Jabberjaw!" hilarious. It's as if H-B is saying, "Here it is: Jabberjaw. We don't believe we're doing this, either, but here goes." (I also liked all of Jabber's various clichéd 70s personas in the credit sequence, including karate master). The other music varies little, from that one brief chorus that seemingly accompanies every chase scene (it sounds like something filched from the Filmation Archies's dumpster), to some amusing disco drop-ins. Jabberjaw's "serious" sci-fi sequences feel like they're coming from an entirely different show...and hence are all the more charming in their contrast against the childish humor. The band members of The Neptunes are an utter wash-out as far as being memorable characters, although I found myself fascinated with the scary design for Shelly, whose black, heavily-lined eyes and slack jaw reminded me of one of those meth heads or paint huffers on Cops (what were they thinking with that look?). As for Welker's Jabberjaw, if you can get past the lame Curly imitation, the directors do drop in his various catchphrases with a speed that's often comical during the chase scenes. He's a good surrogate for the kids watching, alternately childish and brave, and scared of his mean older "sister," Shelly. None of this is "wit" by any stretch of the word...but it is amusing. And sometimes "amusing" is enough. 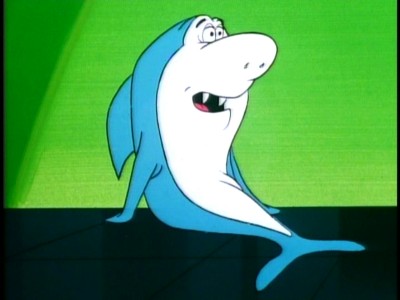 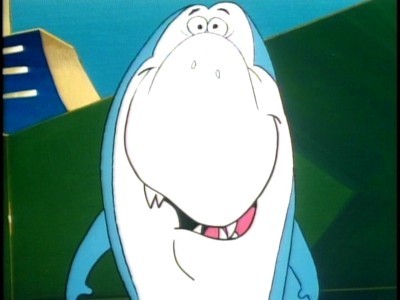 The Video:
The full-screen, 1.33:1 video transfers for Jabberjaw: The Complete Series look about on par with previous Archive Collection H-B releases. Source materials aren't strong, with faded color and screen anomalies present, such as dirt and scratches. Still...I'll bet nobody's aerial in 1976 picked up as sharp an image of Jabberjaw on their Channel Master® as you get here.

The Audio:
The Dolby Digital English mono audio track is about on par with the video: audible hiss and fluctuating-but-not-distracting recording levels. No subtitles or close-captions, either.

Final Thoughts:
Is it vintage Hanna-Barbera? No. Is it "good" H-B? Probably not. Is it funny? Well...yeah, kinda. And that's enough if you're a kid, or if you grew up on this stuff, and you want to go back, maybe just for a Saturday morning or two. I'm recommending the Warner Archive Collection set of Jabberjaw: The Complete Series.