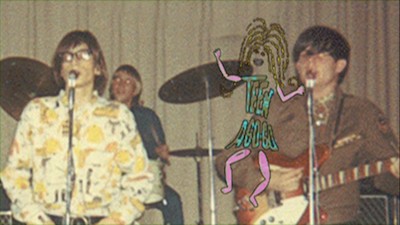 1960s garage rock is a genre of music that can and is endlessly fetishized, particularly as there seems to be a limitless supply of small records and unheralded bands out there waiting to rediscovered. There are websites and magazines devoted to the phenomenon, and whole compilation series that gather obscure tunes onto vinyl and CD. Now there is also a movie about the movement, the independently produced Teen a Go Go.

The film, which was put together by a trio of moviemakers--Melissa Kirkendall, Mark Nobles, and James Sterling Johnson, who produce, direct, edit, etc.--is an oral history of the explosion of locally grown rock 'n' roll in the 1960s, focusing particularly on the vibrant scene in Fort Worth, Texas. The term "garage band" was coined in reference to how these groups came about and where they rehearsed. Inspired by Beatlemania, countless kids across America picked up instruments and set up in their parents' garages and made music. The documentarians have collected together a huge group of musicians from some of these bands, including many you've likely never heard of, and some that maybe you've crossed paths with, like Larry & the Blue Notes and the all-girl band Kandy Kanes. These performers share stories about their heyday, and the commentary is filled out by historians and admirers like Ira Robbins of Trouser Press; Lenny Kaye, who worked with Patti Smith and put together the Nuggets collections; King Coffy of the Butthole Surfers; and Yoshiko from the 5.6.7.8's (known to film fans from their song in Kill Bill), who covered a song called "One Potato," a hit by the Elite, one of the bands featured. Underlining all these talking heads is a constant stream of music, backed with old footage from live concerts and recording sessions, as well as local TV shows (including a brief glimpse of the Kingsmen on "Sump'n Else"). They talk about playing youth halls, renting their own clubs, the rise of teen-oriented discos, and even playing strip clubs, and the latter part of the film focuses on the ongoing influence of garage music and the cult that has grown around it.

Fittingly, Teen a Go Go is produced with much the same spirit as the music it is celebrating. This is a down-and-dirty production, there isn't much polish or high-end production values. Interviews take place in people's homes and offices, their porches, or even bowling alleys. This doesn't much matter, however, as Teen a Go Go has a buoyant energy. It is fueled by shared enthusiasm and experience, packed full of interesting stories and remembered personalities. If you're into early, skuzzy rock, you're probably going to be fascinated by the documentary. I wish maybe a little more focus was given to specific songs and we could have gotten the opportunity to hear more of the tunes in full, but that's a very minor complaint. If you aren't already into the music, Teen a Go Go could conceivably turn you into an obsessive. The sound is addictive, and you'll have quite a journey ahead of you seeking out the material that's available and waiting to be heard.

Video:
Again, this is a homegrown production, and so not really in full competition with your bigger studio films. The anamorphic widescreen transfer shows the limitations of the source material, and the video can be fuzzy and the colors a little pale. Luckily, the budget price the manufacturers sell the Teen a Go Go DVD for on their website more than makes up for this. Again, you have to go with the spirit in which this was intended: it's not meant to be a big release. The DVD doesn't even have a menu, it just loads and plays.

Sound:
The soundtrack is mixed in two-channel stereo and is actually pretty good. Some of the interview audio can be a little fuzzy, but the music sounds cool and that is what matters most.

Extras:
No extras on the disc. My copy came with a two-track CD, however, and a Teen a Go Go guitar pick. I can't tell for sure whether this is standard, but the extras were much appreciated by this reviewer! The CD has "Night of the Sadist" by Larry & the Blue Notes and the aforementioned "One Potato" by the Elite, both songs that I really wanted to hear more of after listening to the stories around them and catching the snippets of them in the movie.

FINAL THOUGHTS:
Teen a Go Go is Recommended. I love old rock 'n' roll, the DIY aesthetic, and just listening to people talk about music. Teen a Go Go is full of great anecdotes and awesome records you likely haven't heard, and though the production value is on the low-end, its independent ethos captures the mood and power of garage rock in all the right ways. If you are even remotely interested in the idea of such a film, seek out Teen a Go Go.