MGM // NC-17 // February 15, 2011
List Price: $19.99 [Buy now and save at Amazon]
Review by Stuart Galbraith IV | posted March 15, 2011 | E-mail the Author
Bernardo Bertolucci's Last Tango in Paris (1972) falls into that unusual category of '70s art house sensations that has aged noticeably in some respects while remaining fresh, unique, and even startling in other ways. No Hollywood heavyweight had ever made a film this sexually explicit, and because Marlon Brando had starred as The Godfather earlier in the year, this Italian-French co-production mostly in French and originally rated "X" attracted a lot of mainstream attention. Last Tango in Paris was also released during a brief period of "porno chic," when adventurous upper- and middle-class audiences tested the X-rated waters. Earlier that summer the much less ambitious $25,000 Deep Throat grossed somewhere between $30-50 million. Last Tango in Paris was even more popular and also more controversial. Pauline Kael wrote a career-defining review in its defense, saying it had "altered the face of an art form," a review that distributor United Artists reprinted in its entirely as a double-page ad. Others called it nothing more than pornography, the National Organization of Women denounced it, and at least one bomb threat was reported. The film was banned in several countries including, after a limited release, in Italy where Bertolucci and others were tried for obscenity and the Italian Supreme Court ultimately ordered the destruction of all theatrical prints.

In these much more prudish times, Last Tango in Paris continues to shock, but its lasting power is Brando's incredibly revealing if indulgent performance, more psychologically naked than literal.

MGM's Blu-ray, released through Fox, is good but not sensational, and may have been ready and waiting in the wings long before it was released. For a film this important it's almost a crime that there are no extras beyond a trailer (in high-def). I expect a supplements-crammed special edition is planned down the road. 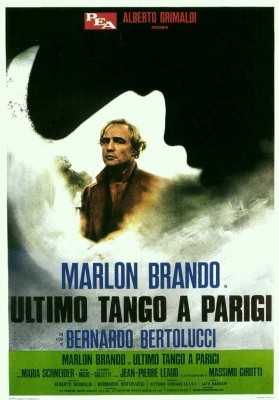 (Mild Spoilers) Jeanne (Maria Schneider, who died last month at the age of 58) is interested in renting an apartment in a rundown building in Paris. There she encounters Paul (Brando), an expatriate American, and after some flirting the two have passionate intercourse. Soon after, Paul suggests an unusual relationship, that they share the apartment as anonymous lovers, revealing nothing about each other's lives, not even their names.

Meanwhile, Paul is struggling to come to terms with the suicide of his French wife, the owner of a rundown hotel they had been living in for five years. Paul doesn't know why his wife committed suicide; she left no note. He questions Marcel (Massimo Girotti), with whom she had been cheating on Paul, but he doesn't know, either. Paul's mother-in-law (Maria Michi) wants a proper funeral but he refuses.

Jeanne's life separate from Paul is also shown. She's dating a pretentious filmmaker, Tom (Jean-Pierre Léaud), who is obsessed with filming every moment of their relationship.

But, in a sense, the film really isn't about sex at all. Rather, Last Tango in Paris is instead a movie about rage and emptiness, of trying to channel anger and suppress an encroaching outside world in a hermetically-sealed capsule (the apartment) and via an uncommitted relationship with a total stranger. Not surprisingly, the rage gets unleashed anyway, the emptiness is felt, and the outside world bleeds in.

Whether it was the emotions laid bare, the revealing sex scenes, or both, Brando and Schneider felt genuinely violated by Bertolucci, both actors using the term "rape" to describe their experience. Schneider in particular felt the movie had "ruined her life" and stolen her youth. She died without ever reconciling with either Brando or Bertolucci.

Nevertheless, Brando gives what may be the best performance of his film career. He supposedly wrote or rewrote his own English dialogue (Agnès Varda worked on the French part of the script). Much of it is sophomoric - in response to Jeanne's groping: "That's your happiness and my hap-penis" - though in keeping with the character. Several justly celebrated scenes are achingly autobiographical, and his long, angry and sad monologue while sitting with his dead wife is considered some of the finest acting ever done anywhere, in any medium.

Although the scenes with Léaud might be read as yet another facet of the director's personality - Bertolucci "directing" a fantasy relationship - mostly they seem designed to deflect criticism of the film from either extreme, as would-be "art" or as crass sexploitation. Tom the "auteur" is so absurb and annoying that Bertolucci's satirizing of such pretentious types positions his film squarely in the middle. But Tom's role in the story seems redundant and almost from another movie.

Is Last Tango in Paris misogynistic? In that state of mind Paul certainly is and Bertolucci and/or Brando may have been, at least in 1972, but the movie positions its audience as flies on a wall, watching helplessly as Paul and Jeanne destroy one another.

Presented in its original uncut, X-rated version (even in Japan, where my disc defaulted to Japanese subtitle options), Last Tango in Paris generally looks reasonably good in 1080p high-def, showing off Vittorio Storaro's beautiful 1.85:1 cinematography to best advantage. There's room for improvement, however. This disc doesn't disclose whether MGM had access to the original film negative, but that may still reside in Italy and may be inaccessible. In any case some interior close-ups and exterior long shots look extremely good while other scenes appear rather soft.

More annoying is the DTS-HD Master Audio, which like a lot of earlier MGM Blu-ray releases has remixed the music tracks way too loud, an ear-splitting contrast to the dialogue, often barely above a whisper. English and French subtitles are included. On my player, hidden Japanese subtitles also appeared while the "Subtitles Off" options still triggered English subs for the French dialogue.

The only extra feature is a U.S. release trailer that, like a lot of art house-type releases of the period, extensively quotes praise from film critics while teasing the viewer with still photographs instead of moving images from the film.

Until a more supplement-packed edition comes along, this seminal '70s film is Highly Reccomended.