Kiss Me Deadly: The Criterion Collection

The Criterion Collection // Unrated // June 21, 2011
List Price: $39.95 [Buy now and save at Amazon]
Review by Stuart Galbraith IV | posted June 27, 2011 | E-mail the Author
People tend to think of 1950s movies as reflections of bland, white bread postwar America, quite forgetting Hollywood was gradually moving toward darker, heretofore unexplored regions. Westerns like High Noon (1952) and the collaborations of director Anthony Mann and star Jimmy Stewart were certainly bleaker and featured psychologically troubled heroes; science fiction movies like Invasion of the Body Snatchers (1956), as with High Noon, surreptitiously explored McCarthyism and the Blacklist; even musicals like A Star Is Born (1954) and It's Always Fair Weather (1955) laid raw issues of alcoholism and postwar angst and failure.

As if in response film noir, already cynical to begin with, got even darker during the decade, and the darkest, most apocalyptic noir of them all is unquestionably Robert Aldrich's film of Mickey Spillane's Kiss Me Deadly (1955). It's a way-ahead-of-its-time potboiler starring Ralph Meeker as the nastiest, most misogynistic and sadistic of private eyes, Mike Hammer.*

Criterion's Blu-ray is licensed from MGM, the latter having previously released it to DVD in 2001, in 4:3 matted widescreen. The new high-def disc looks great, rendering its downtown Los Angeles locations with impressively seedy detail. As usual for Criterion, the disc is packed with great extra features. 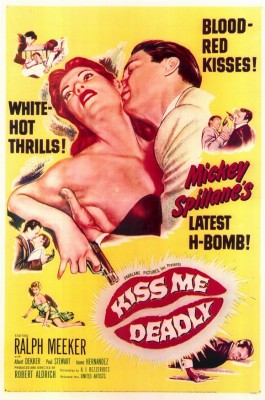 On a lonely stretch of highway outside of Los Angeles, private eye Mike Hammer (Ralph Meeker) nearly runs over Christina (Cloris Leachman, in her film debut), an escapee from the local insane asylum She's barefoot and wearing nothing under a man's trench coat. Shortly after picking her up Hammer's car is ambushed, the girl is brutally murdered, and Hammer himself barely survives a fiery plunge off a cliff courtesy some mysterious bad guys.

Taking a break from penny-ante divorce cases, for which he pimps out his secretary and sometimes lover Velda (Maxine Cooper), Hammer decides to investigate Christina's murder, partly out of vengeance but mainly because it "must be connected to something big."

And so it is. Clues provided by Christina's coded lesbian roommate/lover Lily Carver (Gaby Rodgers) gradually lead Hammer toward what Velda calls "the big whatsit," a tightly sealed package coveted by the mostly unseen Dr. Soberin (Albert Dekker): nuclear age booty more precious than diamonds and more deadly than a shipload of TNT.

In adapting staunchly anticommunist Spillane's 1952 novel, left-leaning Aldrich and screenwriter A.I. Bezzerides make the already brutal Mike Hammer even more corrupt, violent, and immoral. And, when you think about it, among the more stupid, with Hammer inadvertently causing as much death and destruction as is strewn in his direction. Many viewers, while admiring the film, are as much turned off by its thug-hero, almost indistinguishable from the sadistic murderers he pursues. Long before Dirty Harry was taking the law into his own hands there was Mike Hammer: Him, the jury. The role was Ralph Meeker's career high, the handsome yet perpetually scowling actor was difficult to cast in much else. Though he'd been an important stage actor, appropriately replacing Marlon Brando on Broadway for A Streetcar Named Desire, and while he later would support several other fine films, notably Kubrick's Paths of Glory and Fuller Run of the Arrow, Kiss Me Deadly remains Meeker's signature performance.

The film is also rife with fatalism about the growing threat of nuclear holocaust, though in recent years critics and scholars tend to read too much into this latter facet. More important is the way Aldrich and Bezzerides densely pack the film, sometimes a bit pretentiously, with disorienting images lending it its apocalyptic nihilism, like Spillane's novels suggesting a world spiraling headlong into utter moral and maybe even literal collapse. So apocalyptic, in fact, that a mysterious altered ending widely distributed for decades (here included as an extra feature) suggested the very end of world itself, or least the end of a good chunk of Southern California.

This disorientation amid depravity is expressed in myriad ways, from the bizarre opening titles, which scroll backward, thus reading, "Deadly Kiss Me," and so on. Simultaneously, music on Hammer's car radio, playing Nat King Cole's "Rather Have the Blues," is nearly drowned out by Christina heavy, nearly hyperventilating breathing from fear and exhaustion. The film that follows is as Byzantine and indecipherable as The Big Sleep but so visually arresting - if not assaulting - that it hardly matters.

As Alain Silver and James Ursini point out in the film's audio commentary track, Kiss Me Deadly fuses elements of '40s film noir with a more modern, almost TV look, and the flat semidocumentary style popularized in films like The House on 92nd Street. The mix of old and modern permeates the film as much as its seedy pessimism. Like other '50s noir it makes excellent use of the soon-to-be-razed Bunker Hill neighborhood in downtown Los Angeles, with its rundown but stately mansions converted to low-rent apartments. And yet, in addition to its radioactive McGuffin there are other science-fictiony/Playboy-hip nods, such as Hammer's early reel-to-reel telephone answering machine, which always dazzles audiences seeing the film today. (Such devices weren't commonplace until the late 1970s and early '80s.)

The film is concentrated with great performances by character stars: Robert Cornthwaite (who has a great line), Paul Stewart, Juano Hernandez, Jack Elam, Percy Helton, Strother Martin, Paul Richards, James Seay, etc. Aldrich regular Wesley Addy has a good role, and the director makes excellent use of Albert Dekker's unusual cadence. Nick Dennis has a substantial role as Hammer's Greek-immigrant auto mechanic ("Va-va-VOOM!"), but even though the actor was born in Thessaly, his hyperactive, scenery-chewing performance comes off as much a ludicrous ethnic stereotype as Chico Marx, at least to this reviewer.

Kiss Me Deadly, presented in its original 1.66:1 widescreen format in 1080p high-definition, looks great. The opening titles are a bit "hot" while dissolves and other process shots are notably softer and less detailed, but otherwise the detail is fantastic and the blacks rich as tar. According to Criterion, a 35mm fine-grain master positive was sourced, while the mono soundtrack was derived from a 35mm optical track. The region "A" encoded disc is closed-captioned. The restored, original ending accompanies the feature.

Supplements include the aforementioned Silver/Ursini commentary, which is comparable to their many noir commentaries for other labels. Also included are excerpts of Bezzerides from The Long Haul of A.I. Bezzerides, a 2005 documentary; now-and-then-style video pieces about some of the film's locations, focusing mainly on the Bunker Hill neighborhood; the self-explanatory documentary Mike Hammer's Mickey Spillane (1998); the very brief, confusingly altered ending; and a regrettably textless theatrical trailer, in high-def.

Pattered after seedy '50s rags like Confidential! magazine, Criterion's booklet includes essays by J. Hoberman and Robert Aldrich, as well as an incomplete cast and crew list, and info about the transfer.

The savageness of Mike Hammer and the bleakness of Kiss Me Deadly shocked many in 1955 and it continues to impress unprepared viewers today. One of the all-time great noirs, Kiss Me Deadly looks stunning here and, buttressed with some fine extras, is a no-brainer DVD Talk Collector Series title.

* Coincidentally, the night before watching this I ran L.A. Confidential (1997) for a friend who hadn't seen it. There's a lot of Mike Hammer in Russell Crowe's police Officer Bud White, the difference being that White's savageness is the result of seeing his mother beaten to death when he was a child. Conversely, neither Spillane nor Aldrich/Bezzerides attempt to explain, let alone justify, Mike Hammer's propensity for violence.