People on Sunday: The Criterion Collection 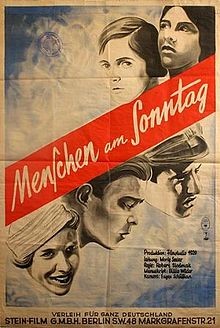 Made for a small budget on the periphery of Germany's studio system, under the shadow of such Weimar-era mega-productions as Fritz Lang's Metropolis, Robert G. Siodmak (The Killers) and Edgar G. Ullmer's (Detour) unassuming, frolicsome, visually exquisite 1930 film People on Sunday announces itself from the very beginning, via an insouciant intertitle, as an experiment. Its full title is People on Sunday: A Film Without Actors, and, while it is at heart a well-choreographed work of fiction, it has all the immediate, observational feel of a documentary. Its characters--nonprofessional young Berliners "playing" themselves--do live out a languorous, low-key, small-scale story, but People on Sunday is more of an aesthetic, immersive experience than an efficiently executed plot. As is true of many of the best silents, it has instinctive flights of visual creativity that can achieve an effortless-seeming poetry, but its visual sensibility runs somewhat contrary to a certain nightmarish, anti-realist, expressionistic stereotype of the great German cinema of the era (The Cabinet of Dr. Caligari being perhaps the best-known example). The narratively unmoored but very realist People on Sunday simply seeks beauty in a plausible escape from the everyday through ordinary friendship, flirtation, and leisure-time pursuits--experiences whose actual extraordinariness is indelibly revealed by the filmmakers' nimble way with the medium.

The film's very loose scenario, scripted by Billy (then "Billie") Wilder and Curt Siodmak (Robert's brother) involves five early-twentysomethings living and working in Berlin in what looks like spring or summer of 1929: taxi driver Erwin (Erwin Splettstösser); his live-in girlfriend, Annie (Annie Schreyer), a model; his good friend Wolfgang (Wolfgang von Waltershausen), a wine salesman; Christl (Christl Ehlers), a movie extra; and Brigitte (Brigitte Borchert), Christl's best friend, who works in a record shop. On a Saturday afternoon, waiting for their streetcars at the end of their workdays, Wolfgang and Christl circle each other in a dance of wary attraction, and he asks her to go for a drink, which goes well enough that he invites her to meet him the next morning at Nikolassee, a beach on lake Wannsee and one of the city's recreational destinations. He shows up for their day at the lake accompanied by Erwin (Annie has stayed in bed, preferring to sleep away her Sunday); Christl brings along Brigitte. The rest of the film centers on these four young, charming, handsome and beautiful people getting to know each other--playing, eating, drinking, and flirting together on their day off. 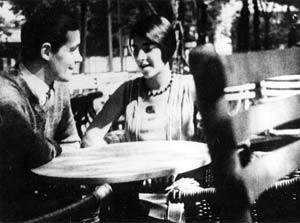 Aura--a sense of tone and rhythm--is crucial when a film's scenario is purposely devoid of forward-driving event, and People on Sunday has it in spades, at times evoking the dizzying city-inebriation of Vertov's The Man with the Movie Camera, at others Rohmer's La Collectioneuse, with its young people surrounded by sun, sand, and water, and the tantalizing, gently implied potential eroticism of that situation. The film's sensibility includes a view of bustling city life as something that contains its own natural cycle, the workweek, and it tracks the winding down and starting back up of that cycle--from Saturday afternoon to Monday morning--not just through the Sunday outing of our central foursome, but with multiple, long, fascinating digressions into the life going on around them. These stretches of the film capture wide-ranging, striking, and inventively shot views of Berlin and its people at a very precise moment in history when, for all the political, social, and economic instability, disaster, and horror that preceded and followed it, that city was beautiful, progressive, and the home of some radically advanced thinking--a great place to be young, with a sense of freedom, experimentation, and discovery in all facets of life. (With its nonchalant optimism of both style and content, the film's very existence reflects this dizzily optimistic energy.) Particularly memorable are a scene in which various beachgoers, having their picture taken by a roving photographer, are successively shown in very tight close-up ending in a quick freeze-frame; and another, remarkably edited sequence in which a man with a cane (a war veteran?), after watching soldiers walk by in formation, approaches a cluster of historical war-hero statuary and, as a sober Sunday treat, allows himself to have a seat and join the company of what he can feel, just for this moment, are his noble military predecessors.

During the stretches when we do come back to Erwin, Wolfgang, Christl, and Brigitte, we follow their little flirtations and tiffs, rivalries and joys, through their sun-dappled picnic lunch, a sleepy post-meal break, a surprise (it's not the couple we would have expected) pairing off for an amorous walk in the woods, and an adventure out on the lake in a pedaled boat. There is a glistening, touching romanticism to all of this; these four are so young, so in the present, and their Sunday adventure is so fleeting. After they see each other home and noncommittally suggest that they do it again next Sunday, we realize that anything that has transpired between them could very well have been for this lazy day in the sun only. That impermanence bittersweetly, tenderly underscores the quiet majesty of the seemingly quotidian yet quite precious day of freedom and relaxation we have just had with them. The film winds down with a coda in which we briefly see our Sunday boys and girls back to work on Monday morning, and closes on a reassuring note, with intertitles cheerfully reminding us that four million Berliners are joined together in the happy knowledge that every dreary workweek at least gives them another Sunday to look forward to. 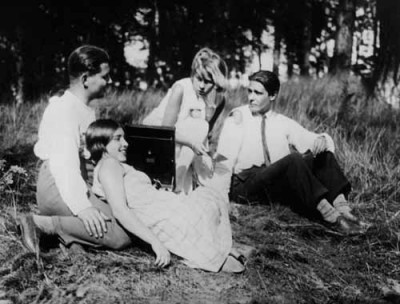 People on Sunday's loose location shooting, sense of immediacy and spontaneous beauty, and unabashedly playful editing left traces that can be spotted in the similarly independent-minded schools of Italian Neorealism in the '40s and the French New Wave in the '50s, and its down-to-earth, generous delight in its people and places is right in line with Jean Renoir's ability to reveal the particular beauty of virtually anyone, anywhere. And it offers us a glimpse into the origins of some of Golden-Age Hollywood's best emigré filmmakers: Wilder, Siodmak, Ullmer, and cinematographer Eugen Schüfftan (Eyes Without A Face, The Hustler). But its status as the seminal early work of several cinematic legends only hits you upon reflection. It is a testament to the youthful exuberance of the filmmakers, the cast, their city in its fleeting moment of grace that they carry us alongside them through the film's golden moments, swept away by the feeling of enchantment and the carefree passing of time even as we vaguely regret that such a respite from life's hassles and pressures goes by so quickly and fades away, like some fondly half-remembered dream.


At 80 years after its initial negatives were struck, People on Sunday inevitably shows signs of age; there is a fair amount of noticeable flicker and print damage on the 1.33:1 aspect transfer, mastered at 1080i/60hz and corrected to its original projection rate of 22 frames/second. But it is clear, both from the Criterion imprint and from the details of the restoration described in the extras (see below), that the greatest possible care has been taken to find the best available elements from which to reconstruct a film as close as possible to its original version. Thus, though the print is not pristine, it is undoubtedly the very best we could hope to see of a film that was fragmented and scattered around Europe in different versions and prints of varying quality for so long. All of the film's visual impressiveness still comes through, and despite the impossibility of a perfectly unmarred picture throughout, the visual quality is quite good considering the context, and the effort is laudable.


Each of the disc's two scores is presented as a bright and clear uncompressed PCM soundtrack. The first--and the one that the disc, I think rightly, defaults to--is the most recent, composed and performed by the Mont Alto Orchestra live for the film's showing at the 2009 Telluride Film Festival, and now recorded especially for Criterion's release. This score is closer in tempo and melody to what one more readily associates with the musical accompaniment for a silent film. The second soundtrack is a score conceived and performed by the Czech Film Orchestra in 2000; it is notably slower and more contemplative, and using the audio key on my remote to alternate from one soundtrack to the next reminded me of just how powerful an ingredient film music is, as the Mont Alto soundtrack makes many scenes feel lighter, more buoyant and carefree; whereas the Czech Film Orchestra soundtrack (which even includes some operatic vocals) adds a somewhat weightier, more tender aspect to some of the same scenes. As usual for Criterion, this is an embarrassment of riches; over time, it would not seem at all unreasonable to give each of the scores at least one go.


Criterion has included cinematographer Eugen Schüfftan's subsequent half-hour short, 1931's Ins Blaue hinein, both for its director's involvement as DP on the feature and for its stylistic similarities to People on Sunday. Here is another little adventure--with sound, this time--embarked upon by some young people good-naturedly willing to go where the moment takes them, and despite its hints of the encroaching economic despair of the worldwide Depression of the time (all these optimistic, can-do people are unemployed), it is more unequivocally happy and eventful than the feature. A series of prettily amusing events ensues when a shop owner who has gone bust and two of his now former employees decide to take "one last ride" in his car, bringing along a girl of their acquaintance. Their shenanigans eventually include myriad car troubles, a beauty contest for dogs, and a bit of off-the-cuff entrepreneurship. This is a film that is contagiously in love with light, motion, and its own graceful charm, and it makes a fantastic companion piece to the more substantive feature.

The other supplement is Weekend am Wannsee, a short 2000 documentary by Gerald Koll on the film and its restoration. Koll includes interviews with the now-nonogenerian Brigitte Borchert, who experienced momentary stardom when People on Sunday was released to great acclaim and popularity in 1930; and with the film's enthusiastic, deeply involved restorer at the Nederlands Filmmuseum, Martin Koerber, who offers insightful and interesting tidbits on his process of synthesizing the best possible version of the film from its various extant prints. There is also a to-the-point but very informative who's who of the team of greats who collaborated on People on Sunday, and goes briefly into its reception and impact at the time of its premiere and initial run.

Finally, the accompanying booklet contains a brief history, explanation, and appreciation of the film by scholar and writer Noah Isenberg, wherein he explains that, because the filmmakers told differing stories over the years about the film's production, we may never know with any certainty who (among Wilder, Siodmak, Ullmer, et. al.) did what on the film. This is supported by the booklet's two somewhat conflicting accounts of the making of the film, one written by Billy Wilder at the time the film was released, one taken from Ullmer's 2000 biography.


A blissful, slightly melancholy documentary-fiction hybrid, People on Sunday takes us on a weekend outing with four carefree young Berliners at the height of the open, progressive, but doomed between-world-wars Weimar era; the film casts the warm, quasi-erotic spell of a lazy day full of possibilities and free of the pressures of work or household. It is an early collaboration from some seminal German filmmakers--directors Siodmak and Ullmer, writer Wilder, cameraman Schüfftan--and offers a surprisingly sweet, already confident taste of all the various forms of visual and storytelling skill and passion they would later exhibit in Hollywood and elsewhere. The film is self-confessedly "experimental," but we can now safely say the experiment was a resounding success; its result is a little slice of youthful paradise that still feels fresh, bedazzling and seducing first-time viewers even 80 years after it was made. Highly Recommended.