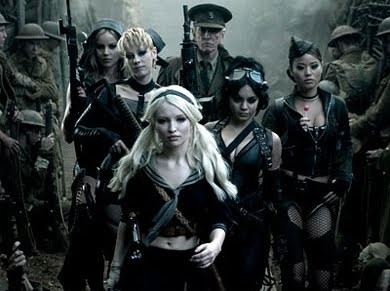 It would be all but impossible to review Zack Snyder's Sucker Punch without simply writing a list of all of the film genres and forms it steals from, so why even bother? I marked down silent German Expressionism, women in prison films, Nazi-sploitation, late '80s music videos, '30s backstage melodramas, kung fu movies (and the television show of the same name), WWII "gang on a mission" flicks, medieval epics, science fiction, and video games. I probably missed a few. What is remarkable about the film is how thoroughly it replicates the imagery and iconography of those genres without capturing the excitement or energy of any of them. Watching Sucker Punch is like channel-surfing when there's nothing on.

Snyder has made a specialty of graphic novel adaptations (his previous hits were Watchmen and 300), and that visual style has certainly influenced his work here. What he apparently didn't pick up were those other, secondary elements, like plot and characterization and, God help us, good common sense. The screenplay (which he co-wrote with Steve Shibuya) is an absolute disaster, a mishmash of intermingling realities that plays like Inception rewritten with head trauma. In an opening sequence that is admittedly evocative and effective--primarily because it's done with only music and imagery, and none of the cringe-inducing dialogue that will follow--"Baby Doll" (Emily Browning) accidently shoots her little sister when attempting to defend herself against her evil stepfather, who apparently killed her mother. He has her committed to the "Lennox House for the Mentally Insane," an all-girls mental facility, and sure enough, there's a messy catfight within seconds of our arrival.

Bad ol' stepdad has arranged to have our girl lobotomized in a few days, so in the interim, she imagines an alternate reality, in which she and her fellow inmates are captive employees of a kind of nightclub/brothel. Baby Doll is, come to find out, a breathtakingly sexy dancer--though we never see this, since whenever she dances, she goes into another alternate reality, in which she (and, later, her fellow inmate/captive/dancer/whatevers) enact scenarios from war and action movies, each one a mission to gain a tool they need in order to escape the nightclub/asylum outside of that dream.

Or something like that. By reading that paragraph, you've already given the plot more thought than Snyder and Shibuya, who basically use it as a clothesline on which to hang the wildly disparate set pieces--the experience of watching the film is like watching the weather in Kansas (i.e., if you don't like it, wait ten minutes and it'll change). The trouble is, once you've figured out what the hell they're doing, the picture becomes depressingly formulaic and predictable: Baby Doll starts to sway, Snyder's camera zooms in on her closing eye, she opens it to find herself in the next craaaaazy situation, poor Scott Glenn shouts the mission and a few clichés at the team of hotties, and off we go with another listless action sequence.

As should come as no surprise to anyone familiar with his previous work, those scenes are CG-ed out the wazoo, much to their detriment; the set pieces are so virtual/digital that there's no weight to them, no flesh or blood. They're like cartoons--or worse yet, video games (in that worse possible sense: video games that you're watching someone else play).

"Fine," you ask. "But is it sexy? It sure looks sexy." And the answer is: well, not really. Yes, we follow our thigh-high wearing, midriff-baring heroines into their various battles, and there's the occasional leering upskirt shot as they parachute in, but there's shockingly little eroticism to be found; Snyder clearly should have spent less time watching Michael Bay films and more time with the cinema of Russ Meyer. He inexplicably assumes we'd rather see these warmed-over action scenes than Baby Doll's sexy dancing that everyone in the movie is so worked up about; the lovely leading ladies are the equivalent of a dolled-up girlfriend waiting on the couch while her boyfriend sits on the floor playing Xbox.

The acting is barely worth mentioning, except to note that leading lady Browning is mostly required to smile blankly and bat her big eyes (I'd be hard pressed to come up with a leading character in a talkie who's had less to say than this one), and that John Hamm appears to have been hired solely to distract the audience from noticing how lame the big reveal is. Oh, and the great Carla Gugino is absolutely wasted in the would-be Dyanne Thorne role, a cinematic crime for which Snyder should be sent to movie jail for a good five to ten. That's hardly the case, though; he has bafflingly been handed the keys to the Superman franchise, which makes you wonder what the hell they're putting in the water over at Warner Brothers.

When you step back and think about it, Sucker Punch is so ill-conceived, so misbegotten, and so utterly confounding on so many levels, it's kind of a miracle it actually got made. It's a big, loud, ugly picture, loaded with big explosions and intolerable music and the worst manner of soap opera dialogue. It hasn't got an original thought in its pretty, empty head. And it will presumably be a big hit, which is the most depressing part of all.