Warner Archive // Unrated // February 22, 2011 // Region 0
List Price: $26.99 [Buy now and save at Wbshop]
Review by Stuart Galbraith IV | posted March 30, 2011 | E-mail the Author
A real anomaly, Wild Rovers (1971) is an unusual elegiac Western, far subtler than writer-director Blake Edwards's usual output. Despite incongruous lapses into broad humor and a generally sluggish pace, his atypical approach to the genre and its central performance by William Holden as an aging cowpuncher elevate the film to near-classic status.

Fresh off Darling Lili (1970), a $25 million flop, Edwards lost control of Wild Rovers during postproduction, MGM obviously reluctant to release the film as Edwards had originally intended, as a big roadshow running somewhere between two-and-a-quarter- and three hours in length. (James Aubrey, head of MGM, was notorious for his ruinous creative tampering on a number of early-'70s releases.) The picture was whittled down to 106 minutes, its ending was altered, and the film went out as a general release. Edwards and Holden later made S.O.B. (1981), which satirized the impact of Darling Lili and Wild Rovers on the director's career.

Fortunately, Wild Rovers was restored in 1986, and it's the longer roadshow version that's out now on DVD. This release runs 136 minutes including an overture, intermission card, entr'acte, and exit music. It's not clear to this reviewer if all of the original footage survived, or to what extent Edwards was involved in reconstructing this version, nor have I seen the shorter 106-minute cut.

For such a highly regarded Western from a major director, one featuring name actors like Holden, Ryan O'Neal, and Karl Malden, it's surprising Wild Rovers was relegated to Warner Home Video's Archive Collection. The stereophonic soundtrack is good and features fully directional dialogue, but the image is dirty, muddy, and the color is rather tepid, though this Panavision production is in 16:9 enhanced widescreen. The lone extra is an unenhanced trailer. 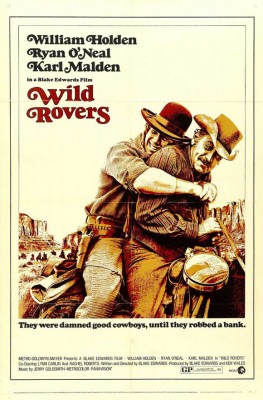 While Buckman and his two boys fret over a longstanding feud with sheepman Hansen (Sam Gilman) - a subplot leading absolutely nowhere - Ross and Frank casually decide to rob the local bank. They kidnap the local banker, Billings (James Olson), threatening his family lest he open his bank's safe. The pair gets away with $36,000, but before making their getaway leave $3,000 with Billings in order to pay the other cowboys back at Buckman's ranch.

But Billings's wife (Lynn Carlin) talks her husband into pocketing the $3,000 without telling anyone and, believing they've made off with all the money, Buckman angrily dispatches Paul and John after the two ranch hands.

Though loaded down with overly familiar Western movie clichés, in other ways Wild Rovers is quite unique. Edwards's West is as harsh, violent, and unforgiving as Sam Peckinpah's (like Peckinpah, Edwards films its flashes of extreme violence in agonizing slow motion), and yet at its core are many beguilingly intimate vignettes. While holding Billings's family hostage, Frank becomes enamored of an unweaned puppy that he takes with him. When the puppy later feeds off the nipple of a housecat belonging to an old associate (Moses Gunn) of Ross's, Frank proposes buying the cat to feed the dog - all while the two bank robbers are still very much running from the law.

Wild Rovers anticipates the kinds of broad narrative canvas-intimate character relationship stories, grounded in deep, lifelong friendships among cowboys later chronicled in Larry McMurtry's Lonesome Dome novels and their television adaptations. Ross, a slight variation of Holden's character in Peckinpah's The Wild Bunch (not as embittered, and a bit less intelligent), is the wistful aging cowboy with one last shot at achieving his dream: retiring to a ranch in Mexico. (His character also recalls Joel McCrea's in another great Peckinpah film, Ride the High Country.) In the callow young Frank, Ross recognizes his own naïveté and youth, and though they couldn't be more different also complement one another.

The film draws obvious parallels of Frank and Ross to John and Buckman, with nonjudgmental Ross a better if surrogate father figure for Frank than sanctimonious Buckman is with his own flesh and blood.

As he often was, in films as varied as Sunset Boulevard, Stalag 17, The Bridge on the River Kwai, The Wild Bunch, and Network, Holden is utterly captivating. Wild Rovers isn't quite up to the highest standard of those films, but it's one of Holden's two or three best performances. There's one scene near the end - I won't reveal the circumstances - where Holden delivers a long, hypnotic monologue so beautifully performed that it's almost otherworldly.

Edwards's script and the approach is choppy and inconsistent, much like Jerry Goldsmith's score, which reaches for Big Country/Magnificent Seven epicness some of the time (it's memorable though and Goldsmith's soundtrack CD is recommended), contrasting other, subtler cues that sound more like the composer's avant-garde music for Planet of the Apes. The other performances are variable, with Tom Skerritt and Joe Don Baker exactly the opposite of what you'd expect; Skerritt is overemphatic while Baker underplays his part. Rachel Roberts is a neat surprise in the small role of a shrewish whorehouse madam.

Edwards, alas, never made another Western (Sunset certainly references them, however), though watching this I'm now curious about the Western scripts Edwards penned early in his career.

Wild Rovers was filmed in Panavision and presented here in an adequate 16:9 enhanced widescreen transfer, on DVD-R format. As described above, the image is a bit muddy, soft, and rather drained of any vibrant color but acceptable. Kudos to Warner Home Video for releasing the longer roadshow version with the overture, entr'acte, and exit music intact. The stereo audio (no subtitles) is very impressive, with fully directional dialogue that's as much a pleasure to listen to as Goldsmith's score.

The only supplement is a 4:3 trailer that doesn't sell the film very well.

Holden's magnificent performance, one of his best, and Edwards's unusual approach make this a uniquely disarming Western worthy of rediscovery. Highly Recommended.