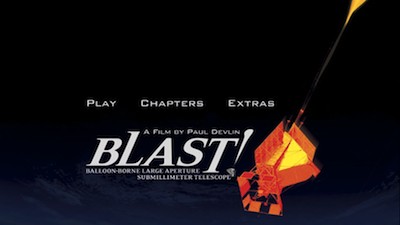 BLAST! is a documentary about a super special telescope that a bunch of scientists send into the upper atmosphere using a giant balloon. I'm not kidding. It's like Werner Herzog's Up. The title is in all caps because it stands for Balloon-borne Large Aperture Submillimeter Telescope. Submillimeter. In other words, it looks for radiation signatures so small, they can't be detected from earthbound telescopes. This light can mostly be seen via dust motes that get heated by the distant stars, creating a reflection the BLAST team hopes to use to map the universe and get us closer to its origins, peering back billions of years.

It's a lot to wrap your head around, no doubt, but BLAST! does a good job of making this far-out astrophysics lesson accessible. The actual science of the experiment is only one small part of it, and it is cut into the movie in digestible chunks, put in easy-to-follow language by writer Emily Kagan. The movie proper is directed by Paul Devlin (SlamNation), whose brother Mark is one of the heads of the crew building the telescope. He is a practical scientist following in his father's footsteps, and he has a vested interest in making sure that this project comes off. One of the many benefits would be that he gets to go home to his family; another is he may change the course of all human knowledge. You know, big and small. In terms of the documentary's focus, Mark is the main character, and his sidekick is Barth Netterfield. Barth is a unique character, and an interesting counterpoint to Mark in that Barth is a Christian who believes that a Supreme Being has fine-tuned the universe so that it continues to run and keep us alive. To unlock this being's blueprint is to understand further the wonder that these creations hold.

It's a fascinating dichotomy, and a long overdue examination of how science and religion can co-exist. But again, it's only one small part of this whole story. BLAST! has a lot going on, to the good and the bad. Sometimes it moves too fast and some of the meatier bits and pieces fall off the table; on the other hand, at a lean 73 minutes, it manages to generate a terse narrative that never loses sight of the very workable plot. 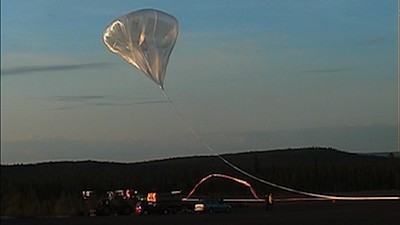 BLAST! is a quartet of scenarios, odd and even. The odd numbers show the two satellite launches, the even are the aftermath and the regrouping. The first flight begins in Sweden and ends in Canada; the second goes up and comes down in Antarctica. In between, the science team deals with failure, analyzes data, and fine tunes for the next mission; in the end, they sift through their informational treasure and begin to extrapolate what it all means. In the midst of this, we get plenty of downtime with the excited and dedicated men and women working to put the machines in the air, and also meet the captivating people they run across along the way. One of the more fascinating sidebars comes when they go searching for the first telescope in the frozen wilderness, and we are introduced to an Inuit guide who tags along to protect them from polar bears. It's the kind of leftfield detail that earns the movie the above comparison to Werner Herzog. It's also hard not to think of the German filmmaker's Encounters at the End of the World, since the second launch is set up at McMurdo Station, the same encampment Herzog chronicled in that movie. He and Devlin are kindred spirits when it comes to being fascinated by the odd personalities that search the outer reaches of knowledge. (Herzog's path actually crosses with the BLAST crew, and an extra on this disc shows him interviewing them for Encounters.)

Unfortunately, Herzog casts a big shadow, and Paul Devlin doesn't quite measure up. BLAST! is a good documentary, it's entertaining and informative, but it's more in tune with a particularly good episode of Nova than it is a full-on feature film. That's not really a knock, the PBS people do great work, but Devlin neither captures the larger implications of this mission nor does he have the unique personality to insert himself into the proceedings. His brother and Netterfield are more than charming, but they don't necessarily carry the film either. Perhaps if the results didn't seem so abstract to a layman, there might be a greater impact when we start to see the data taking shape and then BLAST! maybe could muster more of a crossover audience. Because, really, the adventure that getting this data entails is pretty good, it just left me wanting more. 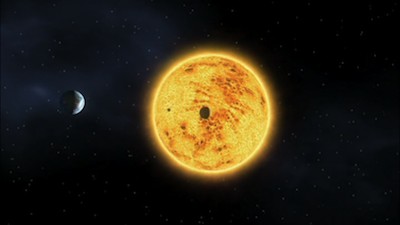 Video:
BLAST! was shot in widescreen with a digital camera and the footage largely reflects that. The transfer is nice, though, and the graphics for the explanatory sequences look sharp, leading me to believe that the DVD was mastered properly and with a good eye for presenting the material in as positive a light as the source allowed.

Sound:
The Dolby stereo mix does a good job of keeping the audio clear and allowing us to hear the location sound. There isn't a lot in terms of ambience, it's all pretty much centered, but with a film like this, that is perfectly acceptable.

Extras:
There are five deleted scenes, three of which are more about the travel and the camping out, a fourth shows a more detailed look at the telescope, and the fifth is the aforementioned Herzog visit. The cameras being turned on Werner is pretty amusing, we get to see him at work and also for once see the reactions that the interviewees have when he leaves. It's only just over two minutes, but it's memorable.

Trailers for BLAST! and Paul Devlin's other films, SlamNation and Power Trip are also included.

FINAL THOUGHTS:
BLAST! is a unique and surprising story about a band of astrophysicists with a pretty radical plan and the efforts they go through to execute it. Though the final results may be a little out there for those not well-versed in astronomy, and the basic storyline is a tad bit thin, the spirit of the adventure is infectious. You will believe a scientist can attach a telescope to a balloon and make it fly! Recommended. 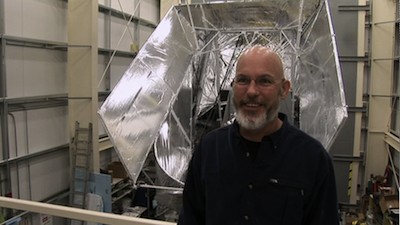