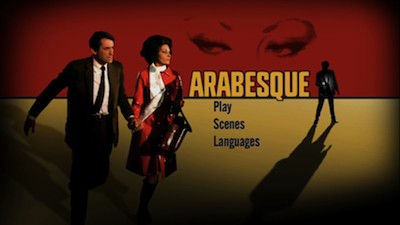 I am depressed after watching Arabesque.

Not because it's a tearjerker, either. This 1966 Stanley Donen picture is supposed to be a romantic comedy thriller. It depresses me further that I have to type the phrase "supposed to be." Because it's not romantic, funny, or thrilling. To call it a failure on every level is being kind, because it suggests it has more than one level. Arabesque is as flat as the DVD it's printed on.

What depresses me is what a desperate stink there is around this movie, and the squandered good will that Donen is trading on. I am not really sure why it took the director three years to make a movie after Charade, but in that time, Arabesque was all Donen could come up with: an obvious knock-off of his own previous success. To read that this was originally intended to be another vehicle for Cary Grant does not surprise me. Donen is chasing a fading magic here, even bringing back one of Charade's writers, Pierre Marton (a.k.a. Peter Stone), and getting another snappy score from Henry Mancini. And while he doesn't get back Grant or Audrey Hepburn, there is sufficient star power in the pairing of Gregory Peck and Sophia Loren that you'd think it would work.

Well, as you go through life, you're gonna think a lot of things, and much of the time, you're going to be wrong. 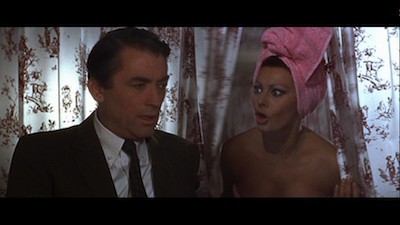 Here is the skinny: Peck plays Prof. David Pollock, an expert in hieroglyphics teaching at Oxford, who is hired by some thugs to translate a small piece of paper that has some secret code on it. It's important enough that the Egyptian government is even curious about what it details, asking David to go along with the crooks in order to keep an eye on them. The main baddie, Beshraavi (Alan Badel), takes David to his lair to show him his really bad Peter Sellers impression. Also, not his lair really, it belongs to Yasmin (Loren), who is somehow a kept woman in her own house. (How does that work? You get to "own" Sophia Loren and stay in her mansion? How do I apply?) She is also a dirty double-crosser working for another clandestine organization, the one that Beshraavi stole the message from. David is caught in the middle of all this, unsure of who to trust, and probably afraid of trusting that special feeling Yasmin inspires deep down. (Deep down where? I'll leave that to your imagination.)

What makes Charade an enduring film is its ability to balance near-screwball levels of comedy, dopey romantic impulses, and grisly violence for a wholly unique, almost schizophrenic middle-ground between classic Hollywood and cinema's newfound openness and laxed production code. Donen is trying for the same blend of old and new here--including some truly embarrassing experiments with psychedelia--but the mix never blends. The direction and the writing are clunky, and despite their pedigree, the lead actors are all wrong. Peck can't manage the broad comedy, he doesn't have the self-deprecating nature that Cary Grant has, and let's have some straight talk about Sophia Loren: she's gorgeous, but her acting is limited. She's about as graceless here as a ballerina with two broken legs. Put these two together, and you've got whatever the opposite of chemistry is.

According to Wikipedia, "The arabesque is a form of artistic decoration consisting of 'surface decorations based on rhythmic linear patterns of scrolling and interlacing foliage, tendrils' or plain lines, often combined with other elements." I'll give Donen this much: his movie does kind of live up to that. It's a bunch of surface decoration combined with a lot of interlacing...elements. It's just those tendrils and plain lines never come together to be very much. 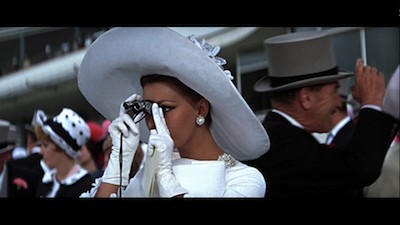 Video:
The 2.35:1 anamorphic transfer is good in some ways, not so good in others. The widescreen image is surprisingly clean with really nice colors, giving what appears to be an accurate approximation of the period film stock and the often pastel-like hues of Loren's wardrobe and the drab grays and browns of London. There is, however, a lot of digital noise, including soft edges, combing, and hazy surfaces. It's fairly passable, maybe just below average; certainly not up to current standards, more or less what we might have thought was okay ten years ago.

Sound:
The stereo mix of the mono soundtrack is good, if unremarkable. The sound is fairly well centered, with no extraneous hiss or pops. The balance between dialogue and music is good, and both come through clear without any off tones or hiccups. It likely portrays the soundtrack just as originally intended, so no problem there.

English closed captioning is offered. Alternate language tracks, both subtitled and audio, are French and Spanish.

FINAL THOUGHTS:
Skip It. Oh, it kills me to say that! A romantic comedy spy game by Stanley Donen with music by Henry Mancini? I'd sign up for that any day...I mean, I guess I still would, as long as it's not Arabesque. This Gregory Peck/Sophia Loren vehicle is one big dud. There are no laughs to be had, and no excitement from either the action or the kissing. It's a lot of great ingredients that are fine when apart, but somehow don't work together. Undercooked, overfed, poorly executed. Where did it all go wrong? 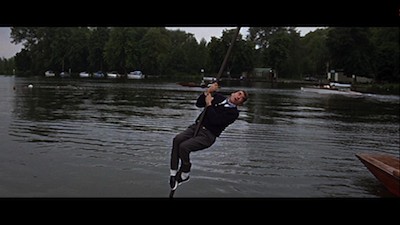