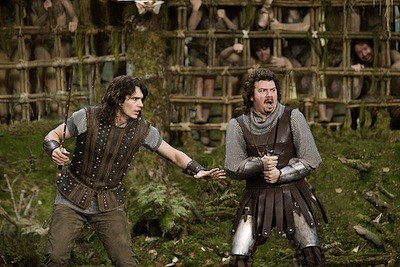 It's a story as old as time. Two brothers, born to a king, one a hero, the other a loser. It's the stuff of myth. Legend, even. And now, of course, the movie Your Highness.

Danny McBride wrote Your Highness as a starring vehicle for himself. The Eastbound and Down star has been steadily building a filmography of far-out comedies where he plays an overzealous gadabout, possessed of an oversized bravado that may or may not hide crushing insecurity. This time around, he is the loser brother, Thaddeus, second son of the King. Thaddeus spends his days around the castle chasing chambermaids and sheep, smoking out with the goatmen. You know, the usual. Meanwhile, his brother Fabious (James Franco) goes on quests and slays Cylopses.

Fabious returns from his most recent excursion with a beautiful, doe-eyed virgin (Zooey Deschanel) he rescued from the evil wizard Leezar (Justin Theroux). On their wedding day, Leezar appears to steal the girl back. She's part of an ancient prophecy, and if he can impregnate her on the night when two moons converge, their offspring will be a dragon and he can presumably rule the world. Thusly, Fabious must rescue her a second time, and he convinces Thaddeus to go with him. Along for the ride is Thaddeus' wily manservant Courtney (Rasmus Hardiker) and, eventually, a woman warrior by the name of Isabel (a surprisingly formidable Natalie Portman). Armed only with a magical compass and comical English accents, the questing party must find a magic unicorn sword. Along the way, they will be betrayed, forced into gladiatorial battle, navigate a labyrinth, and do all the other things one generally does on these kinds of journeys. 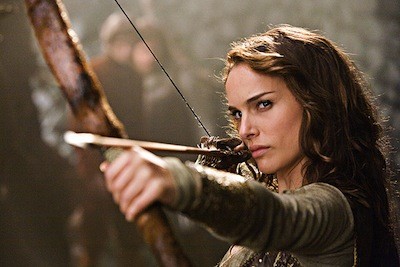 Your Highness is a sword-and-sorcery parody, updated to accommodate modern language and lots of "Dude, I'm not gay" jokes. It's a silly movie, sometimes stupid, sometimes absurd. It's also occasionally funny, but not really as funny as I'd hoped. Structurally, it's mainly the guys wandering from one comedic situation to another as they make their meandering way to Leezar's castle. It's kind of what a bunch of dudes would come up with if they got really stoned while watching Monty Python & the Holy Grail and decided they could make that movie themselves. Actually, why mince words: it's exactly that. There's a ton of pot humor in Your Highness. The title is even a pun. Get it? Your HIGHness.

In fact, I wouldn't be surprised if this idea got cooked up on the set of a better stoner movie, Pineapple Express, which also featured Franco and McBride. The movies share the same director, David Gordon Green, one of our most underappreciated American filmmakers. Green goes full-tilt here. He directs the hell out Your Highness. The sets and costumes and special effects are phenomenal. You won't find a better looking dumb comedy out there right now.

The problem is the screenplay could have really used a few more drafts. McBride co-wrote the film with his pal Ben Best (he plays Clegg on Eastbound), and though they have a lot of good ideas and a really fun premise, they don't really take it far enough. Each sequence has a few laughs, but as the movie goes on, it feels like it takes longer and longer to get to the next punchline, almost like they got too obsessed with their own weird ideas and forgot to add jokes. The film's big climax is just an explosion of fireworks and noise, the gags all but disappear.

The cast is generally gung-ho, with Theroux and Portman in particular committing to giving it everything they've got. Franco seems to be having fun, and I'll cut Deschanel some slack, she doesn't have all that much to do. The big misstep here is actually the star. As with the rest of the script, it feels like McBride is holding back. Thaddeus could have used a little more Kenny Powers running through his veins. The character is too wishy-washy, too quick to run, not nearly crass or delusional enough. I really wish these guys had pushed the absurdity further. Your Highness is strangely timid when it comes time to go for broke. Sorry, but you can only say the F-word so many times in Ye Olde English before it gets stale.

I didn't hate Your Highness. It wasn't a truly terrible way to waste an hour-and-a-half. Had I been watching it at home, I might have been just fine with it. I could have had a few drinks, some more snacks, paused the movie when I was getting too fidgety. It's got some decent work from some very talented people. I think they just put too much faith in the "high"-concept of Your Highness and so settled for low humor. It was probably a fun movie to make, but it's only mildly fun to watch. 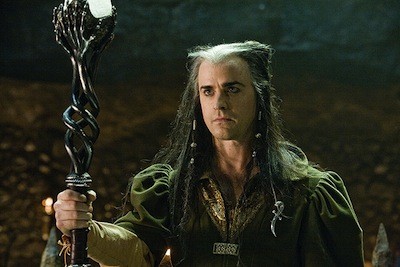