Shout Factory // PG // July 12, 2011
List Price: $26.97 [Buy now and save at Amazon]
Review by Stuart Galbraith IV | posted July 9, 2011 | E-mail the Author
The famous story goes like this: In 1977 20th Century-Fox was readying for release an action-packed, special effects-crammed science fiction extravaganza, a movie they felt certain had broad appeal and which they fully expected would be the year's big blockbuster. Star Wars? Uh-uh. Fox dismissed that trifle as a movie for kids with limited appeal. No, the film that was really going to take off was their colossal post-apocalyptic epic, Damnation Alley.

The unanticipated worldwide success of Star Wars and the utter failure of Damnation Alley soured Fox on the movie they once had such high hopes for. It became something like a bastard son. Though eventually shown panned-and-scanned on network television and released to VHS in the early days of that format, in the years since it's all but disappeared. Despite numerous exploitable elements Damnation Alley was never released to DVD or laserdisc and even with this HD Blu-ray release arrives not through Fox Home Entertainment but rather Shout! Factory, which ultimately sublicensed this seemingly unlovable film.

Having missed it during its original run, I've wanted to see Damnation Alley for nearly 34 years, even though I've always heard it's pretty awful. And so it is, but my curiosity is finally satiated and I'm glad the film has been given the kind of deluxe presentation that puts it in the best possible light - a feeling shared by a legion of science fiction movie fans.

The region "A" encoded transfer isn't perfect: there are imperfections like reel change cues, some blotchiness and overall the image is incredibly grainy and muddy looking, though Shout! Factory probably isn't to blame. For starters, they had to work with elements provided to them by Fox, but the bigger problem may be inherent to the original film. Damnation Alley was heavily doctored during post-production with optical effects added to every exterior shot where the skyline is visible - this in addition to other special effects involving miniatures, matte paintings, etc. Probably somewhere in the neighborhood of 75% of the movie consists of at least some visual effect. It's possible even footage without optical effects work may deliberately have been degraded slightly to smooth out its overall appearance.

Otherwise, it's a fine presentation and the disc includes three informative featurettes, a good audio commentary, a trailer, and a TV spot. 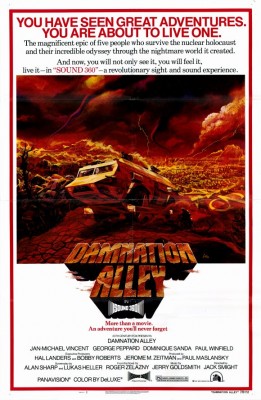 Very loosely adapted from Roger Zelanzy's 1969 novel the movie begins reasonably well, with Lt. Jake Tanner (Jan-Michael Vincent) and Maj. Sam Denton (George Peppard) introduced as incompatible Air Force officers sharing ICBM silo duties deep underground, just as World War III breaks out. Two years later the troops at the silo are no worse for the wear despite canoe-sized scorpions prowling the sand dunes nearby. Until, that is, one soldier foolishly smokes in bed near a leaky gas pipe, the inevitable explosion sending most of the base sky-high.

Except for Jerry Goldsmith's excellent score and the neat-o Landmaster, Damnation Alley is incredibly stupid and inept throughout. This extends to just about everything. Even George Peppard's costume is ill-conceived: for most of the picture he's dressed like a shopping mall security guard, which doesn't exactly lend the character an air of authority.

Many of the key people involved with Damnation Alley, co-producer Jerome Zeitman for one, had little to no experience with science fiction, special effects, or even feature film production. As a result a lot of footage had to be scrapped and either redone or simply dropped. Evidence of this is actor Murray Hamilton's (The Hustler, Jaws) strange unbilled appearance. He plays a general in several early scenes yet is shown only in medium and long shots and he has not a single line in the picture. The film's length, barely 90 minutes, is another clue that a lot of footage was scrapped prior to release.

All this made the contrast with Star Wars even more profound. Where Star Wars is an $11 million movie that looks like a $40 million one, Damnation Alley, which cost $17 million - $6 million more than Star Wars - strongly resembles the $1-3 million exploitation films companies like AIP and New World were cranking out for the drive-in market. It may be the cheapest-looking expensive movie ever made.

The special effects are, to put it mildly, lousy throughout. When full-scale scorpion props proved unconvincing in a sequence with Jan-Michael Vincent dodging the critters on a speeding motorcycle, the sequence was redone with real scorpions added optically. And yet the effect is only marginally better than the ultra-cheap movies Bert I. Gordon had been making since the mid-1950s. This sequence is also an absurd cheat: Keegan watches from a distance, as Tanner seems to be abandoning a woman that's fallen off the bike and about to be attacked by the scorpions. Tanner later explains it was just a mannequin, not a real woman, yet the footage clearly shows living and breathing stuntwoman on Tanner's bike.

The killer cockroaches aren't any better. Most appear to be swaths of quivering molded rubber dragged in carpet sample-type clumps across the floor by wires.

When the ICBM base blow-up spectacularly, most of the effects are scratched-up stock shots from another movie, reportedly Operation Crossbow (1966). Even the picture's climatic flood is largely composed of stock shots, some of which look derived from Earthquake (1974) but which supposedly come from the 26-year-old When Worlds Collide.

The weird sky effects are somewhat better though many are so subtle they hardly seem worth the effort. And while they move more or less in synch with the camera movements, the effect still draws unnecessary attention to itself.

Yet even if the special effects had been spectacular they still wouldn't make up for Damnation Alley's frequent stupidity about life after a nuclear holocaust. Two years after the end of the world, soldiers at the Air Force base seem to have plenty of fresh water to drink despite being in the middle of the desert, and don't seem too terribly interested in the fate of the rest of the world, the death of loved ones, etc.

In Las Vegas, Tanner and Denton visit the half-buried Circus-Circus Casino where electricity unaccountably lights up the floor's many slot machines. Where does this power come from? At the casino they meet Janice, who seems to be Vegas's lone resident, but where did everybody else go? Where are the bodies? Where does she get fresh water?

Things like Peppard's costume suggest no one involved with Damnation Alley considered just how silly some ideas would come off. Late in the picture the band of survivors run afoul of some hillbillies at a roadside diner. The hillbilly leader (Robert Donner), sporting a long hillbilly beard and black scraggly hair, might have been appropriate in a Ma & Pa Kettle comedy about the Hatfields and the McCoys, but in a post-apocalyptic science fiction movie only looks supremely silly.

The hillbillies also have open, bleeding radiation sores, begging more obvious questions. Why aren't Tanner and Denton carrying Geiger counters? Why aren't any of the principal characters sick or even concerned about radiation? Why aren't they worried about all the packaged food running out or going bad? They frequently stop to feed their gas-guzzling Landmaster yet gasoline pumps always seem to be working just fine. Don't they run on electricity? How did Albany survive unscathed by nuclear blasts and radiation poisoning, considering early scenes clearly show that part of the country being pummeled with hydrogen bombs? Why do the plains states and even the outskirts of Detroit look like the Grand Canyon?

Filmed in Panavision, Damnation Alley debuts in both 1080p high-def and widescreen for the first time on home video. It's a problematic transfer for reasons described in more detail above, mostly having to do with the film's wall-to-wall optical effects. Damnation Alley played premiere engagements in a new audio process invented for the film, Sound 360°, which basically employed standard 35mm magnetic stereo but moved the left and right channels to the sides of the auditorium and the surround channel to the back. Apparently that mix couldn't be located or no longer survives, so what's on the disc is a good alternate choice between PCM 7.1, 6.1 DTS-HD Master Audio, and a simple 2.0 stereo track. All are excellent and really bring out Goldsmith's score. As with many other Shout! Factory Blu-ray titles, there are no subtitle options.

Supplements include three featurettes, each running about ten minutes. Co-writer Alan Sharp, in "Survival Run," and co-producer Jerome Zeitman, in "Road to Hell," discuss the many problems getting the picture made and damn it with faint praise ("I felt we did the best we could," Zeitman says). Hollywood car designer Dean Jeffries talks about the famous vehicle in "Landmaster Tales." If you lived in Los Angeles before 2005 you've undoubtedly seen it: for years it sat in the yard of Jeffries Automotive on Cahuenga Blvd. alongside the Hollywood Freeway just north of the Hollywood Bowl. A pretty good audio commentary track features Damnation Alley's other producer, Paul Maslansky. The accompanying trailer and TV spot are in high-def, too, as are the featurettes.

Though the movie pretty much stinks it's undeniable that many fans of this type of picture have wanted to see it for years, especially in the kind of presentation this Shout! Factory release offers. Highly Recommended for these fans, though it's more a Rent It for everyone else.