High and Low (The Criterion Collection)

The Criterion Collection // Unrated // July 26, 2011
List Price: $39.95 [Buy now and save at Amazon]
Review by Stuart Galbraith IV | posted August 13, 2011 | E-mail the Author
When first released in the U.S., High and Low (Tengoku to jigoku, or "Heaven and Hell," 1963) was condescendingly reviewed in some quarters, many praising director Akira Kurosawa for making an American-style thriller that was up to western-world standards of excellence. What most critics missed back then was that while High and Low is unquestionably one of the greatest thrillers ever made, it also far transcends its genre trappings. Basically the story of a wealthy man who loses his fortune but recovers his humanity, High and Low is much more a film about societal responsibility than a treatise on Japan's then-lenient kidnapping laws, even if the picture helped bring about changes to the latter.

High and Low was one of Criterion's first DVDs when released way back in October 1998, with a now quite dated 4:3 letterboxed transfer. In 2008, Criterion reissued it in 16:9 enhanced widescreen and bolstered by new extra features. This Blu-ray is basically that release but in high-definition. Its 1080p transfer has received mixed reviews because of some brightness/contrast issues, especially interior scenes, but this seems mainly due to the way Kurosawa shot it, using long lenses requiring unusually strong lights, rather than any fault of the video transfer.

The extra features are mostly terrific and include a charming television interview with star Toshiro Mifune. Also included is another Toho-produced "It's Wonderful to Create" featurette, a series of mini-documentaries included on other Criterion/Kurosawa titles. Most of the key surviving cast and crew are interviewed for that one. 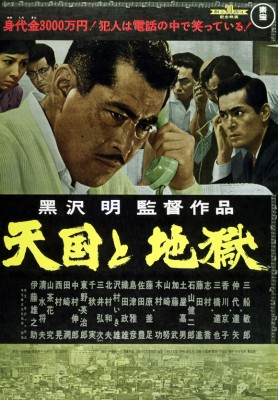 But just as Kawanishi is about to leave for Osaka to close the deal, Gondo receives a phone call from a man claiming to have kidnapped Gondo's son. Gondo unhesitatingly prepares to pay the kidnapper's outrageous ransom, ¥30 million (about $85,000), but just then the son casually enters, wondering what all the fuss is about. Then everyone realizes the horrifying truth, that the kidnapper has mistakenly snatched Shinichi (Masahiko Shimazu), the son of Gondo's chauffer (Yutaka Sada**). Worse, the kidnapper (Tsutomu Yamazaki) surprises Gondo by demanding that he pay the ransom anyway. "You're a fool to pay," he taunts, "But you must. You don't have the guts to kill him."

The police, led by Chief Detective Tokura (Tatsuya Nakadai), arrive but Gondo adamantly refuses to pay. Why should he? It's not his child. If he pays - and even if the police eventually recover all his money - Gondo will lose his entire fortune: his home, his job, everything.

High and Low is a remarkable film, not the least of which is because of the increasingly complex moral quandaries it throws at Gondo. At the beginning this self-made, single-minded man is obsessed with building upon his personal fortune. His paternal responsibility instinctively kicks into high gear when he thinks it's his son that's been kidnapped. But then the screenplay (by Kurosawa, Hideo Oguni, Ryuzo Kikushima, and Eijiro Hisaita) asks whether Gondo is also responsible for the children of his employees. By the end of this remarkable film Kurosawa goes even further, suggesting Gondo is ultimately responsible for the kidnapper himself.

On one hand the kidnapper, a medical student, is clearly highly educated. His tiny apartment is choking with books and his ingeniously executed kidnapping leaves no doubt about his intelligence. His crime is coldly calculated and his attitude arrogant. On the other hand, his particular hatred of Gondo is driven by the shoe company executive's ostentatious wealth, personified by a hilltop mansion lording over Yokohama's slums - the heaven and hell of the title. Even the detectives investigating the crime admit Gondo's air-cooled mansion all but thumbs its nose at the sweltering poor.

Mifune gives an incredible performance: the agony of moral conflict, the humiliation, the righteous indignation, then putting on a brave (and very Japanese) face when he loses it all, and at the end reaching a kind of acceptance about his fate. It's all so perfectly expressed as to elicit enormous empathy from both the detectives onscreen and the audience watching the film. It was a perfect role for Mifune. Like Gondo, he was penniless after the war, trained and with a back-breaking work ethic rose up through the ranks of his chosen profession, becoming one of the wealthiest men in all of Japan. Yet like Gondo, Mifune never forgot his roots. Just as Gondo keeps his old shoemaker's tool kit at the ready, Mifune was often seen cleaning his own production company's toilets, emptying ashtrays and spraying its sidewalks every morning.

The picture is just superb on every level. That first hour is completely engrossing and extremely tense despite (and indeed, partly because it's) being confined to a single room. Kurosawa's use of the Toho Scope (2.35:1) screen shape is riveting, natural yet extremely dynamic. From here the film wipes to a nail-biting payoff sequence aboard the Kodama 151, a high-speed limited express that preceded Japan's first bullet trains. What follows anticipates - by nearly 40 years! - the intensive, science-driven police procedural typified by long-running TV shows like CSI. Then as now the police investigation impresses audiences with its storytelling logic and attention to detail.

The final act, set in the gaijin- ("foreigners") infested Yokohama and its graphically-depicted dope alley ("Hell") beyond, is extravagantly done and intriguing. However, it's the picture's devastating ending that continues to shock and impress audiences even today.

I've talked about the film before, and in much greater detail in my book The Emperor and the Wolf - The Lives and Films of Akira Kurosawa and Toshiro Mifune, but High and Low is so good one notices new things even after a multiple viewings. For instance, I was struck by the realization that shoes are worn inside Gondo's house, a concept virtually unimaginable in Japan then as now, even among the privileged classes. I don't think Kurosawa is suggesting Gondo's wealth has come at the cost of his "Japaneseness" (i.e., wearing shoes in the house like foreigners) but it's probably meant to indicate how far he's taken his money-making obsession: that he's turned his home into a place of business. In another scene Gondo is shown mowing his own lawn but the irony is two-fold for Japanese audiences: almost no urbanites, rich or poor, have lawns big enough to require a lawn mower in the first place.

High and Low was released at a time when movies about cutthroat businessmen and corporate espionage were in vogue, Yasuzo Masumura's Giants and Toys (1958) and Black Test Car (1962) being two good examples. High and Low, as with Kurosawa's underrated The Bad Sleep Well, were part of that movement. Yet the opening scenes in High and Low resonate strongly in 2011 American terms. Like Gondo, National Shoe executives Kamiya (Jun Tazaki), Baba (Yunosuke Ito), and Ishimaru (Nobuo Nakamura) are extremely wealthy and powerful. They work at a company making a quality product that's also profitable. But they want more. Their answer: selling poor quality, cheaply-manufactured shoes to increase the profit margin, consumer be damned!

Watching it again, I was also struck by Kurosawa's idealized detectives, who mobilize the entire force, working tirelessly to help Gondo. If only it were true. After eight years of living in Japan, my own impression is that Japan's police are more akin to Mack Sennett's Keystone Kops.

Filmed in Toho Scope, the region "A" encoded High and Low has inherent high contrast issues that compare unfavorably to other black and white Japanese 'scope films of the same period released or broadcast in high-def. But it still jumps off the screen here and there with an impressive amount of detail and clarity. For instance, Tsutomu Yamazaki's kidnapper wears mirrored sunglasses that in high-definition (but not standard DVD) really make him look like a predatory insect. The high-definition also brings out little, heretofore-unnoticed details like the shimmer in Kawanishi's slightly garish tailored suit.

As in earlier home video versions, the opening titles are windowboxed, extremely so, and the white English subtitles, two lines high, are located entirely within the frame. The novie was first released in Japan in what Toho billed as "Three-Dimensional Stereophonic Sound," i.e., four-track magnetic stereo. This has been retained and though its directionality is modest, it's nonetheless effectively used, and Masaru Sato's eccentric score benefits strongly. The English subtitles are probably identical to the 2008 DVD but are much improved from Criterion's 1998 release. That said, I think they could be better still. In one scene, for instance, the kidnapper is listening to the radio while looking at newspaper headlines about the crime. Rather than clutter the frame, some of the headlines go untranslated, but I'd rather have that information than not.

Supplements include a charming and informative featurette supervised by Teruyo Nogami, Kurosawa's longtime script supervisor and consultant. Nakadai, Kagawa, Mihashi, Takeshi Kato (one of the main detectives) and, by telephone, Yutaka Sada, are all interviewed, along with art director Yoshiro Muraki and various members of the crew. Actor Tsutomu Yamazaki is interviewed separately in a newer video interview, while Toshiro Mifune appears on actress Tetsuko Kuroyanagi's long-running interview show, an episode that originally aired in March 1981. It runs 30 minutes and many will wish it had gone on for hours. Three trailers, two Japanese and one for the American release, all in high-def, are valuable and interesting. The Japanese trailers include rare footage from an ultimately aborted coda featuring Mifune and Nakadai, as well as brief footage of Kurosawa on the set. A 35-page booklet features essays by Geoffrey O'Brien and Donald Richie, while the movie includes a detailed audio commentary by Stephen Prince.

Eminently accessible, High and Low is one of the best films of one the greatest filmmakers ever, and Criterion's presentation and extra features do it justice. A DVD Talk Collectors Series title.

* Including, it's revealed later, money borrowed from yakuza types.

** The actor is reportedly still living as of August 2011, Sada having celebrated his 100th birthday last March.