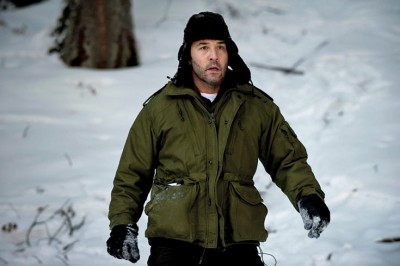 Gaby Dellal's Angels Crest has a palpable feeling of unease in its opening scenes, as young father Ethan (Thomas Dekker) loads his three-year-old son Nate into his pickup truck and drives him out to the woods so they can watch the snow fall. But Nate falls asleep on the way, and Ethan sees a deer he wants to track. So he leaves the heat on, locks the door, and leaves the kid in the truck. No points for guessing that this idea doesn't work out well, for anybody.

The utter helplessness of the scenes that follow, as the father wanders the woods, screaming his son's name, can't help but hit the viewer on some level; likewise the discovery of the little boy's body. But after that, Dellal quickly loses control of the narrative; much wailing and gnashing of teeth follows, underscored by sad music and overstated by swing-for-the-fences acting, particularly by the tic-heavy Dekker and by Lynn Collins as mother Cindy, prone to bouts of screeching.

Would people in this situation get emotional? Of course. Would it always be pretty? Certainly not. But there's no depth to these scenes--aside from the moments where we see that Cindy is very different on her way to the woods than she is when she gets there. That scene indicates some complexity in her character, a quality that mostly vanishes in the rest of the picture. Dekker, meanwhile, overacts to a degree that mostly just makes the audience uncomfortable.

Angels Crest is not just their story, however--which is both a virtue and a flaw. Screenwriter Catherine Trieschmann (working from novel by Leslie Schwartz) surrounds Ethan and Cindy with the residents of the snowy small town they inhabit: Angie (Mira Sorvino), who runs the local diner; her waitress Jane (Elizabeth McGovern) and Jane's partner Roxanne (Kate Walsh); Ethan's best friend (Joseph Morgan), who's sleeping with Cindy; and the local district attorney (Jeremy Piven), who is prosecuting Ethan, and has some secrets of his own.

If the color and community provided by the supporting cast are valuable (and for evidence, see Snow Angels, the similarly titled and far superior David Gordon Green film from 2007), the picture is nearly wrecked by the abundance of dead-end scenes , which appear and sort of plod around without going anywhere. Nowhere is this more abundant than in the clumsy subplot of Jane and Roxanne. The notion of a lesbian couple making it work in a small town is intriguing, but it's choreographed into this one with a lead foot--Walsh's flannel n' swagger performance is several shades shy of subtle, and much of her dialogue is cringe-worthy. Example: she takes the pregnant girlfriend of Jane's visiting son to the diner for a hotdog, and the girl enthuses, "It's the best thing I ever put in my mouth!" (Haw, haw). She then offers Roxanne a bite, which she refuses thus: "I don't do dick." Seriously?

For that matter, the entire subplot of that strained visit goes nowhere and does nothing; it's just a matter of the filmmakers filling time until the ending, which is clearly meant to be quietly devastating but is telegraphed from about the ten minute mark. There are pieces of a good film inside Angels Crest--mostly those involving Sorvino (always good) and Piven, who turns in a clear, straight-ahead performance of real power and instinct. But the canvas is too wide, sketched in with too many underdeveloped subplots and characters, and not enough discipline in the performances of its younger actors. It's a good-looking film with potential, but that's about all it's got.