World in His Arms, The

Universal // Unrated // April 5, 2011
List Price: $14.98 [Buy now and save at Amazon]
Review by Stuart Galbraith IV | posted April 23, 2011 | E-mail the Author
The Howard Hughes-produced Jet Pilot (1950, released in 1957), starring John Wayne, is usually considered the high camp watermark of hysterical anticommunist movies made during the days of Sen. Joseph McCarthy and the Hollywood blacklist. The World in His Arms (1952) is a much better movie overall, but is similarly structured and with the same cockeyed anticommunist agenda. The screenplay was by Borden Chase, who wrote many superb Westerns (Red River, Winchester '73) but here seems to have allowed his involvement with the Motion Picture Alliance for the Preservation of American Ideals, Hollywood's leading anticommunist group, to spill over into his work. The movie is a rousing and colorful if otherwise routine seafaring adventure, set in 1850 San Francisco and Alaska.

As with Captain Newman, M.D., this was originally part of Universal's The Gregory Peck Collection from November 2008. However, The World in His Arms and the other titles in that collection have finally been broken up and made available individually. The lone extra is a trailer but transfer of this three-strip Technicolor production is way above average. 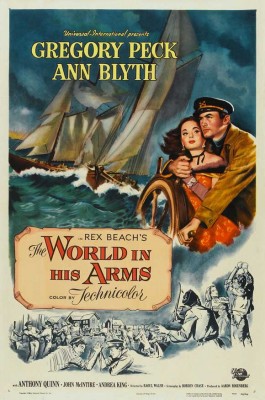 Seal hunter Captain Jonathan Clark (Peck), locally known as "the Boston man," returns to the Barbary Coast to raise $10 million to buy Alaska from the Russians and to rescue his crew, shanghaied by friendly if violent and uncouth rival "Portuguese" (Anthony Quinn). Clark has docked with a fortune of seal pelts*, and he and his colorful crew all but take over an especially pretentious hotel that nervous front desk clerk Eustace (Hans Conried) manages.

Also at the hotel is Russian Countess Marina Selanova (Ann Blyth), who with her Aunt Anna (Eugenie Leontovich), Colonel Paul Shushaldin (Gregory Gaye), and manservant Peter (Henry Kulky), has fled an arranged marriage to Russian Prince Semyon (Carl Esmond). Shushaldin made a deal with Portuguese to transport them to Sitka, Alaska (then still part of the Russian Empire, remember). With Portuguese's crew gone and Clark refusing Shushaldin's offer to book passage, the countess makes a personal plea. However, Clark at first mistakes her for a saloon dancer and later believes she's the countess's personal assistant. Given Clark's distaste for the Russian elite she goes along with the masquerade and the two fall in love. But can it last?

Adapted from Rex Beach's novel (he gets name-above-the-title billing), The World in His Arms bends itself like a pretzel to work in its anticommunist themes. No matter that the evil Russians here are the same Russians overthrown by the communists 67 years later, they're painted with the same totalitarian brush strokes, with Esmond's Prince Semyon especially sadistic.

Interestingly, all the actors playing Russians speak with thick accents with the single exception of wholesome Ann Blyth, whose accent is pure Americana. I guess this was to make her romance with Jonathan Clark more acceptable. For his part, in one scene Clark takes her to a Russian restaurant in San Francisco and pals around with the house musicians because, after all, "They're all good Yankees now."

Later in the film, Clark and his crew, armed with clubs, go seal hunting. The seal head-bashing isn't shown, of course, but it does give one pause to watch the seals merrily "Arf-Arfing" on the beach only to turn up next as big piles of pelts. Probably to offset this, Clark's right-hand man, Deacon Greathouse (John McIntyre), delivers a rather sanctimonious speech about how they only help nature along, taking only the unloved "bachelor" seals, while the nasty Russians (forcing enslaved native Alaskan Inuits to do the dirty work) indiscriminately kill all the baby and mama seals.

Complaints aside, The World in His Arms is lively and delivers the genre goods, with plenty of action, comedy, and romance. Made at a time when Universal (then Universal-International), MCA, and Lew Wasserman were bringing in big stars and ambitious projects to the former B-movie studio, Peck and director Raoul Walsh were clearly part of this trend, and apparently brought in as a package. It's an A-production all the way, with big, expansive sets, and especially good second unit work highlighted by a race between Clark's and Portuguese's mid-19th century schooners. These beautiful ships are clearly running in rough waters and what's captured on film is quite stunning, marred only by cutaways to Peck and Quinn standing in front of obvious process screens.

Amusingly, Universal's overworked fisherman's wharf backlot set - "Singapore Lake?" It may be what's now the Jaws attraction, though I'm not certain about this. - is obviously used twice, first as the port of San Francisco, then later as Sitka Harbor. The matte paintings used for wide shots are different, but the storefronts are the same, except for the Cyrillic signage in the Alaska scenes.

Filmed in three-strip Technicolor, The World in His Arms is a full-frame beauty, with strong hues and almost no misaligned color matrixes, though the footage varies a bit from reel to reel and the process shots suffer. The 2.0 Dolby Digital mono is fine; a French track is also available, as are optional subtitles in English, French, and Spanish. The dual-layered disc is region 1 encoded.

The lone supplement is a trailer, featuring Peck out of character to introduce the film. It's okay and in decent condition.

Pleasant and of interest to cultural historians of the blacklist period, The World in His Arms has the usual quota of action, comedy, and romance and is handsomely produced, though its screenplay is more than a little silly. Recommended.

* As reader Sergei Hasenecz pointedly asks, "If Clark's crew has been shanghaied, how is he docking with a fortune in seal pelts?" Good question.