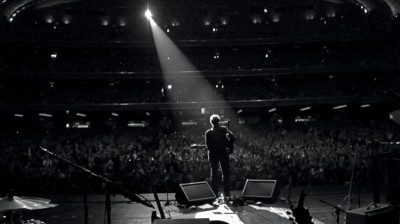 The Swell Season opens with a clip from Once, the small, lovely film that brought folk singer/songwriters Glen Hansard and Markéta Irglová worldwide fame and an Academy Award. Though the process of making that film, its stars also fell in love, providing an off-screen ending happier even than the upbeat but bittersweet one that closes the picture. (Oh, um, spoiler alert.)

Their story doesn't end there, of course. After the surprise success of the film, the duo went on the road--and pretty much stayed there, for a couple of years. The Swell Season (which shares the name most commonly affixed to the duo), directed by Nick August-Perna, Chris Dapkins, and Carlo Mirabella-Davis, goes out on the road with them, as they tour America and visit their respective homes (he in Ireland, she in the Czech Republic). They're successful, they're playing music, and they're in love. "It's a great life we have, isn't it?" he asks cheerfully, as she gives him a bedroom haircut. And for a while, it is.

The film is just about equal parts biography, fly-on-the-wall documentary, and performance, and that mixture works. Stories are told: how Glen left school at 13, how he met Markéta, how their initial collaborations came together. They don't talk much about how they fell for each other, but we see it in the casually loving way they interact with each other, though one can't help but notice that when they rehearse, he's more than a little bossyy (that could be age as well--he's 18 years her senior).

And then there is the music, warm and comfortable, often haunting, imbued with a sense of longing and sadness, sometimes with anger and pain. When he plays (still that same guitar, with the big hole in it), it sounds like the strings could pop at any second, but when she wraps her delicate voice around "All the Way Down," the room goes completely still.

The Swell Season is shot entirely in black and white--it's crisp and beautiful, though it certainly carries its own baggage and connotations, being (for much of the late '80s and early '90s) the go-to look for the "unvarnished" portrait of a musician's life on the road (see U2 Rattle and Hum, Poison's "Every Rose Has Its Thorn" video, etc.). Sure enough, the conflicts eventually begin to surface, made all the more difficult by the personal stuff between the pair. Hansard is dealing with being, for the first time really, a known entity when he walks onstage; the workaday musician uncomfortable with fame is an old saw, but we indulge him because he's so likable. Irglová is having a very different experience, parachuting in just as this thing is starting to happen, and the strain between their perspectives begins to show with snippy little disputes over fan photos and entrance cues.

That passive-aggressive bickering comes to a head in a rather extraordinary scene late in the film, as the two share coffee at an outdoor café and she loses patience with him. "It's such a hard existence, is it not, to always find the battle?" she asks, and notes, not unreasonably, "You wanted this, and now you're rejecting it." She almost becomes our proxy in that scene, which becomes more raw and uncomfortable the longer it goes--particularly because, as it does, the specific object of their altercation (whether to embrace and enjoy fame) broadens, and ends up with something much more relatable and recognizable. By calling him on his bullshit, is she not being "supportive" enough? "Fine, the next time you're struggling with something..." he mutters, and she's backing off immediately: "I'll just shut up," she says, with resignation. Well, who among us hasn't come to that particular loggerhead? As she leaves, the camera holds on the two of them for a very long time, her paying at the register, him still at the table, out of focus. They sit on that shot, and everything that comes after it seems inevitable.

The Swell Season has its indulgences--I for one could have done without the seemingly requisite round of sad Irish drinking songs. But it has several scenes that are quietly devastating: Glen's conversation with his late father (of his own forgotten dreams, the old man beams on his son and grins, "Fuck it, he's done it for me"), the way his "Ma" reacts to his shame over his fame ("No, don't take that away from me"), Irglová's song introduction that almost becomes a confession to the audience, the way the pair rehearses a heart-crushing song backstage at Radio City so off-handedly, chatting and getting ready between lyrics. And then there is the circularity of the closing scene, and the way she watches him sing, the full force of this thing they've shared still vibrating between them. Powerful, emotional, ending. Good, solid documentary.