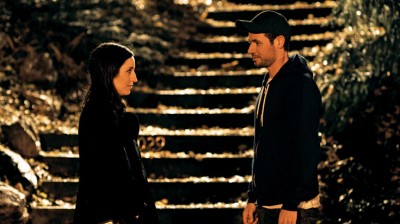 Stuck Between Stations has got all kinds of problems, but it's also got Zoe Lister-Jones, so it's pretty much a wash. Ms. Lister-Jones, the co-writer and star of the inexplicably underseen Breaking Upwards (it's on Netflix Instant, so go ahead--you can always click back to this review), is not only achingly beautiful, but has a fizzy energy and a wonderful, dry way of delivering a line. It's impossible to tell yet what kind of range she's got, but never mind that--let's just enjoy this period of getting to know her on-screen.

The film, directed by Brady Kiernan from a screenplay by Sam Rosen and Nat Bennett, is a one-long-night romance in the Before Sunrise/Quiet City mold. Lister-Jones is Rebecca and Sam Rosen is Casper; they went to school together, grade school and high school, and she was popular and pursued, and no one paid him much mind. He went into the army and she went to college and grad school, where she's made some very bad decisions with regard to her married faculty advisor (Michael Imperioli). He sees her at a bar and misinterprets the joking of her meathead friends; he tries to step in and ends up getting his ass kicked.

Feeling bad, and a little intrigued by this odd duck who remembers her from clear back in the third grade, Rebecca ditches her friends to hang out with Casper, who is about to head back to Afghanistan (he was in town to bury his dad). It's tentative between them at first--there are sparks, but they come and go, as each occasionally says or does the wrong thing. But as they walk the streets of Minneapolis, wandering in an out of an apparently vibrant hipster scene (who knew?), a connection is forged, though neither of them are exactly at a prime point to do anything about it.

It is, yes, a shade on the twee side, and it is occasionally too precious for its own good--both in dialogue and situation (their visit to a public access television station is cutesy and more than a little irritating). But the actors play well together; Rosen hangs back most of the time, letting Lister-Jones set the tone and tempo, and bounces off of her accordingly. Director Kiernan occasionally plays their scenes, together and apart, with split-screens that work better than they should (considering what a wheezy device that is); we're not bothered, because we genuinely want to watch both of them, most of the time.

Josh Harnett pops in for a brief and laid-back cameo appearance; he resists the urge to play his character (a bike-riding, greasy-haired peacenik friend of Casper's) for the laughs that a lesser actor might have reached for. He's working under the radar here, and good for him. Imperioli, on the other hand, is primarily a distraction--he doesn't do much with his role, which (in his defense) is barely there to begin with.

The picture hits a wall in its third act, when convention requires a big falling out between the pair, so it's delivered; it comes out of nowhere and plays like it. The scene feels like a note from a not-so-helpful screenwriting coach ("You need a third act scene of conflict!"), and it's over quickly, thank God. More troublesome is their last big dialogue scene, which falls into the tired pattern of requiring the exchange of Deeply Personal Monologues that Explain The Characters. Problem is, Rebecca's story is heavy, too heavy for a light romantic drama like this one, and the picture can't bear that kind of tonal hopscotching; it's too much psychological weight for the scene to bear. We hear the movie's gears grinding. Then, to make matters worse, Casper tells a tragic story of his own, but no sensitive human being would actually try to "top" a tale that horrifying. It doesn't matter though, because by then, the movie's climactic scene has suddenly turned into an acting class exercise.

It never really recovers, and while the closing scene is admirable for bucking expectation, the filmmakers clearly got so wrapped up in patting themselves on the back that they forgot what audiences are going to a romantic movie to see, even if only for a moment. So, yes, Stuck Between Stations is problematic. But it is also lovingly photographed, and moves at a nice clip, and it has Zoe Lister-Jones. Those things might be enough.