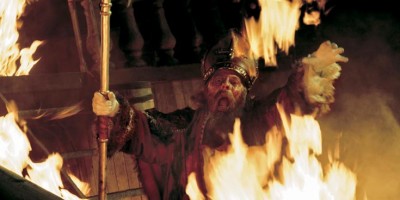 Dick Maas' Saint opens with St. Nicholas and his goons on horseback, terrorizing a village which then raises their pitchforks and burns him alive. So yeah, right away, not your average Christmas movie. The notion of a murderous St. Nick caused more than a little controversy here in the States back in 1984, when the cheapo slasher film Silent Night, Deadly Night took it for a spin; Saint is a Dutch film, and dodges some of those issues by trafficking in their Santa iconography instead of ours--i.e., a Saint Nick who arrives via boat and, with his crew of "six to eight black men," puts all the bad little children in a bag and takes them to Spain. Darker stuff, that. (Your homework assignment before seeing the film: go read David Sedaris's brilliant essay on this version of the Santa story, "Six to Eight Black Men.")

Saint also gets off the hook because, unlike Silent Night, it's got a forceful and wicked sense of humor--Maas has clearly ingested copious amounts of American horror movies, and regurgitates them with a wink and nudge. When St. Nick is stalking a family at Christmastime, he'll give us the peeking-in-through-the-window point-of-view shot--but the windows are frosted over, and the kids inside are singing Christmas carols. It took me until about the 20 minute mark, as the three teenaged girls were walking home from school--two dirty birdies and a virginal "good girl"--to realize that, up to that point, the film was a total structural recreation of Halloween: an opening sequence in the distant past, an intermediate scene, and then the present day. (They throw in a nod to Halloween II later, with a scene in a hospital.)

Maas's Loomis character is Goert (Bert Luppes), a cop wound so tight with hatred for St. Nick that, when a wrapped gift is left on his desk, he unloads his pistol into it. "C'mon, Goert, cheer up!" his bartender grins, but Goert's not hearing it; this year, December 5 (St. Nicholas Day) falls on a full moon, and the last time that happened, his whole family was murdered. He sets about to stop St. Nick, who "won't rest until he's turned Amsterdam into a bloodbath!"

In the process, mythology is established ("bullets won't harm him, but fire does"), clichés are indulged (there's not a reliable flashlight in the damn thing), and plenty of pretty young folks are bumped off in cheerfully blood-soaked kills. It's all done with high style and a good deal of in-joke wit; the score, thankfully, is in on the gag, all thunderous drums and frightened choral singing (like John Carpenter, Maas composes his own music). It's not just a spoof, though; the scares, telegraphed and expected though they may be, land, and the young hero's battle with several "Black Peter"s is a genuinely well-executed action/horror set piece with a Raimi-esque slapstick energy.

The rough-and-tumble scenes like that play best; later, when cops chase St. Nick and his horse across the rooftops of the city, the special effects look junky even for a movie like this. Meanwhile, the big third-act action climax, in its attempt to play serious, comes off looking that much sillier. Or maybe it's not trying to play straight--it could just be that the joke, while a good one, has worn thin by that point in the picture. Saint is two-thirds of a really clever movie, and the rest of it isn't bad enough to sink what comes before. It's good, trashy fun, and those who are in the joke are going to love it. You know who you are.