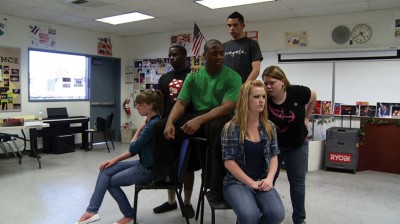 The second strong feeling came not much further into the picture, the stirring of a Drama Nerd deep inside. In my homestate, we didn't have anything like the Drama Teachers Association of California Shakespeare Festival and Competition, in which students from across Southern California gather to present eight-minute cuttings from the Bard's work. There are no costumes allowed; props and sets are also forbidden. All that the students--in groups of four to six--get are four chairs and a script.

As I mentioned, I don't know this particular gathering, but I know this thing, this combination of athletic competition and geeking out over theatre. At my school, we did forensics, so all the film's talk of score tabulation and breaking to semi-finals and dubiously qualified judges took me back a good twenty years. (Lord, am I old.)

Anyway, enough about me. Shakespeare High is directed by Alex Rotaru, who tracks teams from several different schools: the inner-city charter school, a girls' catholic school, a competitive performing arts magnet, the team to beat from the middle of nowhere. They rehearse their scenes; this year's are to be taken from A Midsummer Night's Dream, Othello, and Hamlet. Some of them (like twin brothers Melvin and Galvin, whose tragic backstory is jaw-dropping) are doing it as a favor to their friends, or on a lark, as something else to try. But most dream of stardom--a stardom that seems well within their grasp, particularly considering that Richard Dreyfuss, Val Kilmer, and Kevin Spacey and Mare Winningham (who visit their alma matter in the film and--terror for the students--give some notes) are all alumni of the festival.

The first half of the film introduces us to the students, while the second concentrates on the festival itself. It's a good, solid structure, and it gives us plenty of time to get to know the young actors. If the film has a serious flaw, it is that its canvas is too big; I understand intellectually what Rotaru is doing by introducing us to so many characters, but because the first half of the film is so busy, we only forge real emotional connections to a couple of them--in contrast to the strong bonds we have to so many of the students in, say, Pressure Cooker. It's not fair to ding the movie too much for that--it's clearly not the film Rotaru was making. But because of that, it never really got me in the end, not the way I had been anticipating.

But we know them well enough to be pulling for them by the time the film arrives at the final rounds; as in Spellbound, the up-close coverage of the competition lends helpful suspense to the closing scenes. There are some disappointments, for them and for us, along with some genuinely compelling debate of the philosophical question of interpretation--i.e., should the plays be performed straight-on, or with the kind of creative additions that classicists dismiss as "stunts" or "gimmicks"? It's not a question confined to this competition; Shakespearean directors have this argument all the time.

When the statues are handed out, there are some sour grapes; some of the students, particularly those in the ritzier schools, come off a little pompous and windy throughout the picture, but especially here. But Rotaru should be commended for leaving that stuff in. These kids aren't perfect. They're teenagers. And you get worked up at these things--the stakes seem impossibly high. I remember. I've been one of these kids. Shakespeare High is a lot of things (a celebration of literature, a love letter to the theater, a plea for arts education), but above all, for this viewer anyway, it is an evocative little time machine.