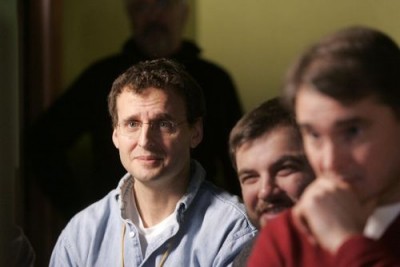 Phil Rosenthal stumbled into a pretty good thing in 1996, when he co-created Everybody Loves Raymond with star Ray Romano. His new documentary comedy Exporting Raymond begins as that show is winding down, with home movies taken backstage and the final tapings of what was, by then, one of the most durable family comedies in TV history. It ran nine years and 210 episodes before drawing to a close, still in top, in 2005. "And then," Rosenthal says, "the Russians called."

Russian television, it seems, has found a bit of success importing American sitcoms and repurposing them for Eastern audiences; we're shown clips from the Russian versions of The Nanny and Married with Children. But those shows are broad and cartoony; Raymond is grounded more in a relatable reality. Will it translate? Sony sent Rosenthal over to help. He took a crew. The results are slight, but inarguably entertaining.

To begin with, Rosenthal is an amusing guy--no surprise for a seasoned comedic writer, but still a relief. He's personable and funny on camera, quick with a one-liner ("I guess I'm making Everybody Loves Rasputin"), and most importantly, he's reactively funny. Bespectacled yet open-faced, he gets plenty to work with; on entering the cold, factory-like "studio" where the show is taped, he asks, "Did they tell you which room they filmed the movie Saw in?" Before his trip, he is briefed in "K&R"--kidnapping and ransom--but by the end of the process, he muses, "Now I'm hoping for kidnapping."

There's pitfalls along the way: the costume designer who wants the realistic clothing scheme to be more "trendy," the head writer who finds the Raymond character to be "a weakling" and "a good for nothing" (the writer, Rosenthal quickly notes, is not married), the possible lead actor who cannot get free of his commitment to a theatre company that turns out to be the Moscow Art Theatre.

Rosenthal tries to ingratiate himself, even attempting to understand the culture in order to better inform the translation. But he ultimately can't do much to prevent the show from becoming, in his words, "a perfect storm of terrible." He tries to offer up suggestions, notes, fears; they fall on deaf ears. "They don't seem to enjoy me," he shrugs. "And they may be right. I may not be enjoyable."

To the contrary, the brainy writer proves a more than serviceable leading man--for a goofy documentary, anyway. As a filmmaker, Rosenthal relies a bit too heavily on trick cutting and cute musical cues for laughs--though, in all fairness, he gets them more often than not. Painstakingly documenting the development of Everybody Loves Kostya may seem a bit self-indulgent, and perhaps Rosenthal is spinning his wheels a bit. But Exporting Raymond is a lot of fun, and is an ample showcase for a comic personality who should venture in front of the camera a little more often.