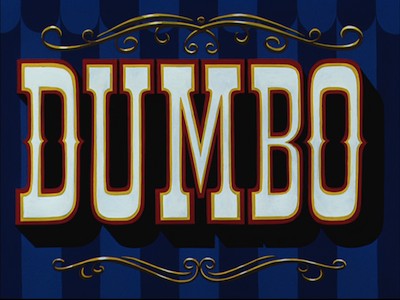 The 1941 Disney animated movie Dumbo is a part of the cultural lexicon. Everyone knows the name, whether they are aware of it as a pejorative for someone with big ears or if they have a more specific idea of the story of the little elephant that could fly. The 70-year-old cartoon, based on a book by Helen Aberson and Harold Pearl, is a timeless story of perseverance and embracing diversity. The simplicity of its message and also of its presentation--the film is only 63 minutes long--are both continuously rediscovered by new audiences who see all-too-human pitfalls in the fable of a circus animal that does the impossible.

The film opens with two criss-crossing courses of action: a circus is trekking across the country to its next location as a stork (voiced by Disney mainstay Sterling Holloway) travels around delivering babies far and wide throughout the animal kingdom. The bird eventually catches up with the big-top caravan in Florida, where he delivers the baby pachyderm with gigantic ears to Mrs. Jumbo (Verna Felton). The other lady elephants make fun of the child, but Mrs. Jumbo defends him--so much so, in fact, that when she retaliates against humans abusing Dumbo, she is declared mad and locked up. Dumbo is left to fend for himself, and he is soon taken under the protection of Timothy Q. Mouse (Edward Brophy), an enterprising rodent sympathetic to a fellow outcast. Early plans to make Dumbo an essential part of the troupe fail, and the baby elephant is assigned to the clowns. They incorporate him into the act by making him jump from a great height into a tiny net. It's a dangerous trick, but it gets laughs.

Performing this shtick is not how Dumbo discovers he can fly, though. Surprisingly, Dumbo's talent emerges after he and Timothy get drunk! In what is easily Dumbo's most memorable sequence, the tipsy friends hallucinate pink elephants. They are drawn in neon colors and set against a black background. They morph and warp and bend and lead Dumbo and Timothy on an unbelievable night that ends in all of them taking to the skies. Of course, benders being what they are, the two wake up with no memory of actually flying--except they are stranded in a treetop. A bunch of crows find them and eventually convince them to try to fly again. Now Timothy and Dumbo have their ticket to the top. 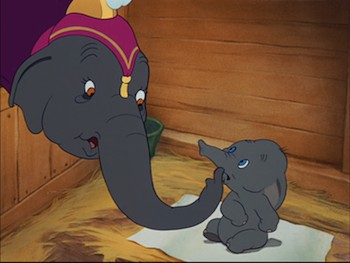 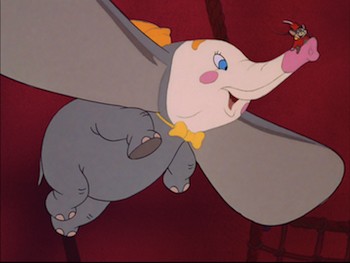 That's the long and short of it. Dumbo is fun and zips along at a brisk pace. The lean narrative builds Dumbo up, shows him falling, and then lets him triumph over the adversity. You can't get any more basic than that, but then, it's why Dumbo is still effective. Every generation has its outcasts, and so every generation can get behind Dumbo's struggles. Granted, some might see a few elements of this film that are outdated. For one, circuses aren't really the going concern they once were; for two, the crows have often been interpreted as racial caricatures. This is a difficult notion to disprove or debate, even though the dialogue suggests the division is more between rural folk and city folk (an abstracted view that is certainly still relevant). In truth, regardless of the motivation behind the crows, the reasoning for why they end up on Dumbo's side is more politically viable than it might seem: listen closely to Timothy's appeal on behalf of his buddy. The outline of his social rejection and subsequent humiliation could easily be applied to a civil rights narrative, and whether the crows are meant to be "country bumpkins" or disenfranchised African Americans, it's something they can get behind. It's also scary progressive for the period.

Dumbo is nicely put together with attractive animation and strong character designs. In some aspects, the production is more streamlined--backgrounds don't pop nearly as much as in some of the studio's more revered features, for example--but that is rarely a flaw. The only time the brevity maybe hurts the movie is in the climax, which is kind of rushed. Can you believe that Dumbo only discovers he can fly and has his ultimate triumph in the last five minutes? No exaggeration. By the time he wakes up in that tree, the movie is practically over.

It's fitting that Disney pulled "The Little Engine that Could" into Dumbo--his official name is Casey Jr.--as his chant of "I think I can, I think I can" is also essential to Dumbo's taking to the skies. In the end, Dumbo is about the belief in oneself, even more so than the sense of community or individual friendship, that keeps Dumbo from going splat. This easy-to-grasp parable should definitely appeal to younger viewers, but it's magic should work on adults, as well. It certainly transported me back to a more innocent age and made me remember when I was far less cynical than I am now. Hell, I used to believe that animals could secretly talk when humans weren't around, just like they do in all these Disney flicks. Even if Dumbo can't roll back my logic that far, it still manages to remind me that the spirit of the individual truly is the most powerful force there is. 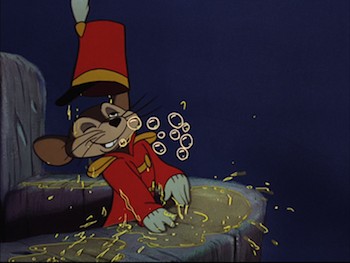 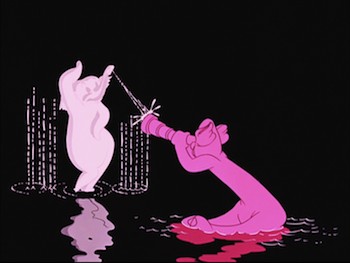 Video:
The Dumbo: 70th Anniversary Edition comes to high-definition in full frame (1.35:1) AVC encoded at 1080p. The color print is absolutely gorgeous. Colors pop, and the animation flows. Detail looks incredible, sometimes even exposing the linework and revealing the hand of the artist. The image is free of any scratches or dirt, and the resolution is slick and sharp. You can't do better than this in terms of classic animation in high definition. You have to give Disney credit, they treat their material right.

Sound:
Like on its Bambi Blu-Ray", Disney offers here two audio options for its original English soundtrack: a new 7.1 DTS-HD mix or the restored original soundtrack, presented in 2.0 and preserving the vintage mono audio design. There isn't much in the 7.1 mix that differentiates it to any great degree to the mono. Both are warm and full of punch, and while the 7.1 has slightly more space in the middle, you could choose either and get along just as well.

Language options for all subtitles and menus--which you choose at the start of the disc--are English SDH, French, and Spanish. The latter two are also options for dub tracks, with both languages mixed in 5.1.

Extras:
Dumbo comes as a two-disc set--one Blu-Ray, one DVD--in a regular Blu case with an outer slipcover and several promotional inserts. Both discs share a host of extras, and most are in high-definition. I will attempt to indicate the ones that are not.

If I am counting right, this is the third time Dumbo has been on disc, and as with most of the Disney upgrades, special features tend to be spread across the various editions, with only a few here and there dropped for the next round. This includes even material dating back to the 60th Anniversary edition from ten years ago, but more extensively to the 2006 Big Top Edition. The oldest DVD-centric extra here is the 15-minute "Celebrating Dumbo" short, with Roy E. Disney, Leonard Maltin, and others recalling the movie's charms. (Unsurprisingly, this is one of the extras in Standard Definition.) There are also two Silly Symphony cartoons that have been carried over from the 2001 DVD, "Elmer Elephant" and "The Flying Mouse." Their relevance to the main feature should be evident by the titles.

Missing from previous packages is a commentary from animation historian John Canemaker, replaced now by a commentary track featuring Pixar's Pete Docter, historian Paula Sigman, and animator Andreas Deja. This is billed as a "Cine-Explore Experience," which allows you to turn on picture-in-picture to see extra materials as they describe the history of Dumbo, including its development and eventual reputation. The in-frame images jump between the commentators talking on camera, developmental drawings of Dumbo, vintage interviews, and sometimes clips of other movies. At various times, there is also more than one thing running at different spots on the screen.

There is also an option called "Disney View," which allows you to utilize the empty space on the left and right of your screen in ab innovative way. Background artist James Coleman (who is also interviewed) has created new framing paintings to fill in the black while you're watching the movie. They are either circus-themed or otherwise fit the mood of the scene. For instance, during a storm, the frame is meant to match the clouds. It's a neat idea, as I think some consumers still complain when the image doesn't fill the whole screen. (I know, I know, but trust me, they exist.)

Improving on the previous retrospective documentary is "Taking Flight: The Making of Dumbo," a 28-minute examination of the Dumbo phenomenon and the historical placement of the movie in the Disney canon. Going with this is "The Magic of Dumbo: A Ride of Passage," a super short look at the development of the Dumbo ride at Disneyland.

There are two deleted scenes: a storyboard sequence featuring Timothy the Mouse entitled "The Mouse's Tale," and an exclusive listen to the deleted song "Are You a Man or a Mouse?"

The short piece from the Disney vault entitled "Sound Design Excerpt from 'The Reluctant Dragon'" (SD) is what it sounds like--a brief bit explaining how the production team does its sound work, using the short "The Reluctant Dragon" as an example.

The Disney Family Play section features kid-oriented games, including an image scramble and trivia game. There are also a bunch of trailers, including two for Dumbo, one from 1941 and one from 1949. Both of those are in SD, while the newer teasers are in HD.

There is also a Standard-Definition DVD in the package with the full-length movie, the deleted scenes, the "Taking Flight" and "Ride of Passage" featurettes, the Disney intro and sound design excerpt, and the new audio commentary included.

FINAL THOUGHTS:
Highly Recommended. Dumbo is sometimes given a lower position in the Disney canon. It's not a technical virtuoso, nor is its story as grand in scale as some of the others; on the other hand, its simplicity means that its appeal and its message are timeless. The cartoon about the child elephant that overcomes adversity and perceived differences to find his true talents still resonates, even as we celebrate the film's 70th birthday. This Blu-Ray release is not the first home video edition of Dumbo, but it's easily the best. It's got an impressive restored picture and informative and sometimes innovative bonus features. The Dumbo: 70th Anniversary Edition is a deserving upgrade of a beloved classic. 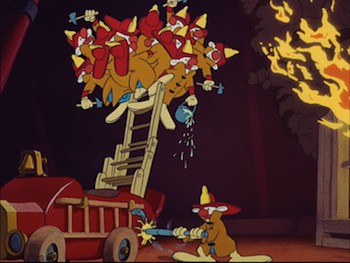 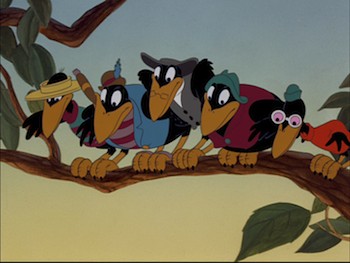