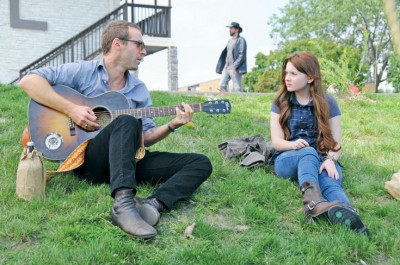 Well, Abigail Breslin has arrived. She's worked steadily since her breakthrough five years ago, in the title role of Little Miss Sunshine, and has done plenty of good work in that time, but Janie Jones feels like it was custom-made as a vehicle for what she can do. She sings (well), she cries (convincingly), she acts (naturally). This is not a cute-kid role, as many of her previous ones were; Janie Jones is only 13 years old, but she's dealing with some heavy shit. Breslin has moments in this film that she plays with more depth and sensitivity than actors twice her age; dig the nuance she gives the line "I don't know what you're talking about," like someone who is trying so badly to keep the hurt from showing, and almost--almost--pulling it off. There's not a hint of contrivance to her performance, and that goes a long way towards making this very conventional story into something fresh and engaging.

The picture--written and directed by David M. Rosenthal--concerns Breslin's Janie, who meets her father, for the first time, at age 13. He is Ethan Brand (Alessandro Nivola), a talented but impossible musician on the downward slope of his career; she is brought to him by her junkie mother (Elisabeth Shue), a onetime groupie who leaves the kid at his show and disappears, ostensibly to "get clean." Rosenthal's screenplay has to do some pretty impressive back-bending in order to convince us that everyone would agree that the best thing for little Janie would be to hop on the tour bus with the father who doesn't know her and doesn't want her, but it happens, because otherwise, hey, no movie.

If the broad strokes are familiar, we're somewhat distracted by the abundance of fine character actors that Rosenthal has brought in to fill the gentle picture out. There's Peter Stormare, almost hidden behind a giant beard, as the patient manager; there's the great Frank Whaley, always funny but never trying to be funny, as the drummer; there's the always-welcome Frances Fisher, turning up as Ethan's mom. Shue only has a couple of scenes, but the stuff happening in her eyes fill in all of the character's blanks.

And then there is Nivola, an actor whom I think we were all told would be the next big thing but never quite became that--primarily, it would seem, due to a) his insistence on doing interesting films, and b) his tendency to underplay, and do it so deftly that he almost disappears into the pictures he appears in. He's never been better than he is here; watching him, we get how infuriating this guy must be to everyone around him, since he can be absolutely unbearable one moment and imminently engaging the next. He's also got a sturdy, solid singing voice, and his band is exactly as good as they should be--talented enough to fill a bar in Little Rock, and absolutely no better than that.

There's a nicely unpredictable quality to the acting, which (again) helps counterbalance the basic familiarity of the material. Because, of course, the band will fall apart, leaving Janie and her dad alone on the road (Stormare's parting words: "You take care of each other!"), and wouldn't you know it, she's pretty handy with the guitar herself, and there's some novelty to his new, stripped-down, father-and-daughter act. Look, this isn't the most innovative or unpredictable storytelling. But the warmth that develops between these two fine actors is just lovely; witness the wonderful scene that finds the two of them, perched on Laundromat washers, each with a guitar, as he walks her through the chord changes in one of his songs. Anyone who can watch that scene and complain about the obviousness of the narrative arc has clearly got a heart of stone, and I'm not that guy. You may have seen Janie Jones before, but the picture has such a shambling charm, and the performers are so endlessly likable, that you just kind of roll with it.