Not As A Stranger 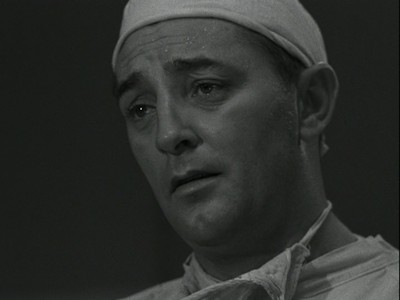 Robert Mitchum is a real son of a bitch.

Okay, not Mitchum himself, but the character he plays in Not as a Stranger. That guy...he's a son of bitch.

Mitchum stars in this 1955 medical drama as Lucas Marsh, a fellow who has dreamed of being a doctor since he was a little kid and who, against all odds, has gotten himself to medical school. When his alcoholic father (Lon Chaney Jr.) drinks away his tuition money, Lucas' future looks dubious, but when he finds out that Kristina (Olivia de Havilland), the sweet Swedish nurse who has a crush on him, is sitting on a fat bank account, Lucas sees a way out. Justifying his actions by saying he's giving Kristina what she wants, he woos her and marries her, gaining access to the cash and securing his future. Dear ol' dad warned Lucas he had a problem, telling the boy he has no heart, and maybe the boozer was right.

Only, Lucas is a more complicated character than that, and this melodrama is more than the simmering potboiler the introduction might suggest. When it comes to medicine, Lucas is an idealist. He may be unable to deal with his personal life, but he believes in the sanctity of life. While his school pals (Frank Sinatra and Lee Marvin) plan their future careers based on the best shot for quick money, Lucas accepts a job as a small-town physician in the hope of doing some legitimate good. He will take over the practice from Dr. Runkelman (Charles Bickford), a no-nonsense country doc' who, in a couple of great montage sequences, shows Lucas the ropes. Actually, there are multiple montages that efficiently take us through the stages of Lucas' career. There is one fantastic segment where he and his buddy Albert (Sinatra), start their joint internship, and via a rapid assemblage of scenes, we see the ups and downs of their on-the-job training. 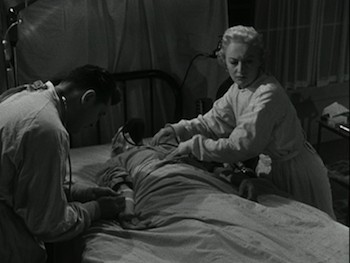 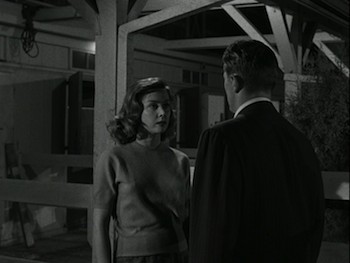 The script for Not as a Stranger is by veteran screenwriters Edna and Edward Anhalt (Panic in the Streets, Girls! Girls! Girls!), working from a novel by Morton Thompson. Not as a Stranger is also the debut directorial feature of revered producer Stanley Kramer. The creative team splits the film into two basic halves: Lucas at school and Lucas after graduation. The post-graduation half is more important, in that it's where the character gets to test his mettle as both a doctor and as a man. He succeeds at the former, but he's not so good at the latter. While he can bust through patients with clockwork precision, he ignores Kristina and her desire for a family. He also starts up an affair with a sexy widow (Gloria Grahame), though in that, practicality mostly wins out over passion. Their one love scene is kind of ridiculous. It takes place in her stables on a windy night, and one of the horses goes wild and starts losing its mind, beating against the gate of its pen. Lucas has to let it out before he can get down to business. I half expected the horse to reach a hoof up to its nose and wink at Robert Mitchum before running off into the night.

Not as a Stranger, then, is the story of how the two aspects of Lucas' life finally come together. To be a better doctor, he has to be a better man, and when he's a better man, he can have a real life. Imagine it as Magnificent Obsession, but with the sawbones' feet planted firmly on the ground rather than having his head up in the clouds. Mitchum has a pretty good handle on Lucas, and he's quite good at portraying the conflict in the man's character; likewise, Kramer already has a strong facility with film language. Despite the silliness of the stable scene, the way he cuts between the lovers and the animals creates a believable semblance of desire, and in the film's climactic surgery scene, the camera circles the operating table, probing the action and effectively conveying the precarious situation. There is even a shot of a real heart beating, just to give the audience a true sense of being there. Kramer somehow turns his slow burn of a movie into a real nailbiter.

All of which only makes me wish Not as a Stranger was a better film. It's one that was perfectly handled while cameras were rolling, but that needed a harsher eye applied either to the script or inside the cutting room--possibly both. At over two hours long, Not as a Stranger takes forever to hit its beats. We can see where it's all going, so it gets frustrating when Kramer doesn't just hurry up and get there. The final fifteen minutes wrap things up with a dramatic flourish, but it's too little too late if the previous 120 have already put you to sleep. 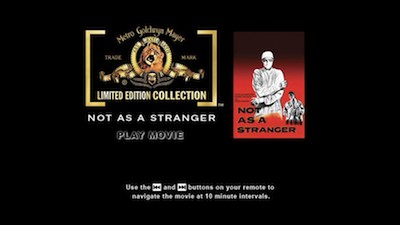 Video:
Not as a Stranger is part of MGM's Limited Edition Collection, a movies-on-demand program that presents lesser-known titles at a premium price with no frills. It's an initiative similar to ones undertaken by other studios, and one I am all for. Most cinema fans could likely dig through any of these catalogues and find movies they have been waiting for, but that don't necessarily have mass appeal. This is basically the studio meeting the consumer halfway: if you order it, they'll make a copy just for you.

Despite hedging its bets by informing viewers before the movie loads that Not as a Stranger was taken from the best available sources, MGM need not have implied that there would be any problems with this transfer. The full-frame black-and-white image on this DVD looks really good, with no obvious damage to the source print or any dirt or noise. The edges can be slightly soft and there are occasional glimpses of minor ghosting, but nothing worth complaining about. Not as a Stranger looks pretty good.

Sound:
The original audio is mixed in Dolby for this release and also sounds good. There are no drop-outs, nor is there any hiss. Everything sounds clear and as intended.

Extras:
No extras. Not as a Stranger is released in a standard DVD-R format with a rudimentary menu and no supplements.

FINAL THOUGHTS:
Rent It. Not as a Stranger is a respectable first directing effort from Stanley Kramer, complete with a fine performance from Robert Mitchum as a young doctor who needs to learn that healing isn't just skill, but having compassion. The film has some nice touches, including a few visual flourishes and an all-around solid cast; the script, however, is lacking in brevity. Not as a Stranger is too conventional to be as long as it is. If there was a way to speed the story along a little more, it could be one hell of a medical drama rather than merely a so-so one. More drama, less mellow. 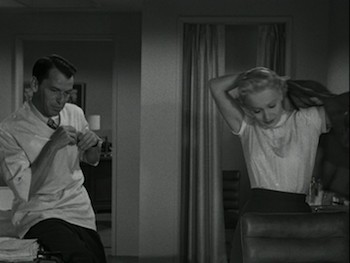 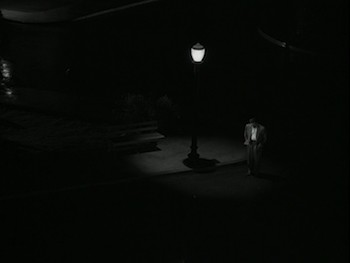