"What happened to us...could happen to you." 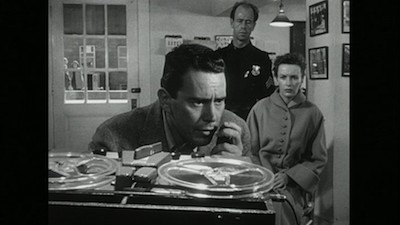 It's interesting now to look back at films from old Hollywood that pushed the "Crime Does Not Pay" agenda. Beginning in the 1930s, the Motion Picture Production Code, alternately called the Hays Code, insisted any criminal activity had to be punished by a film's end and filmmakers had to be careful not to make the bad guys cool or sympathetic. While I don't think there was ever a mandate that the studios had to make movies that actively promoted this message, they regularly did so anyway. Film's like 1952's The Captive City play like extended Public Service Announcements. This one's message: don't be afraid to point out mobsters when you run across them. It even goes so far as to have a direct appeal from Senator C. Estes Kefauver at the end of the movie. Kefauver was head of a task force on organized crime. Needless to say, the good Senator would hate all you little punks running around in your Scarface T-shirts. CRIME DOES NOT PAY!

The Captive City is a dramatized version of reporter and co-screenwriter Alvin Josephy, Jr.'s real encounters with the mob, though my guess is it strays pretty far from the truth. John Forsythe, who later was the voice of Charlie on "Charlie's Angels," plays Jim Austin, a reporter trying to turn around the neighborhood rag in a small town in Middle America. One day, Jim gets a tip from a local private eye that there is a big gambling racket in their 'burg, and the police and city officials are in on it. Jim doesn't believe the snooper at first, but when the dick ends up dead under pretty dubious circumstances, the crusading journalist is awakened and starts to dig.

It's not long before Jim starts getting harassed the same way the dead man did. No one wants this story told. Not the hometown crime boss (Victor Sutherland) or the Mafia enforcer (Victor Romito) that has muscled his way into the local racket. Another witness ends up dead, and Jim and his wife (Joan Camden) begin to fear for their own lives. Jim decides to head to Washington D.C. to tell Kefauver what is going on. In fact, the movie is framed by his run for the Capital. Afraid that the thugs tailing them will gun them down, the Austins stop in a police station midway. While they wait for a police escort to arrive, Jim records his story on a reel to reel, providing convenient narration for the movie.

The Captive City was directed by Robert Wise, fresh from scaring Americans with the threat of alien invasion with The Day the Earth Stood Still. I don't know if Wise had any particular investment in keeping his fellow citizens vigilant, or if he was just a working director willing to take on a variety of assignments. Most likely the latter. The Captive City was shot in three weeks, and the brisk pace translates to the screen. The Captive City is a B-movie through and through, shot entirely on location and with a particularly Spartan aesthetic. This is not a bad thing, however; the storytelling is so clear and concise, the lack of frills actually works in the film's favor. The Captive City wouldn't win any awards for its clunky dialogue or even the by-numbers performances from most of the cast, but Wise's efficiency keeps everything snappy and he never slows down long enough for the narrative to lose interest. You can also see the director experimenting with technique. There are a couple of impressive shots in The Captive City. A scene where Jim finds one of his sources dead is particularly effective, shot entirely from inside the room, as if we are the victim looking out at the living.

It's all totally predictable, but that doesn't stop The Captive City from being a fine way to spend an evening. There are certainly better crime films out there, and ones that offer far more surprises, but sometimes knowing exactly what you're getting doesn't hurt either. And, hey, this one also comes with the added bonus that you're doing good by your country just for watching. Stay strong, America. Crooks are everywhere, and we can only win when we remember that we're all in this together! 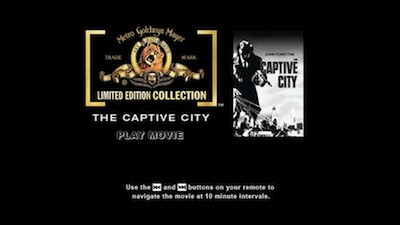 Video:
The Captive City is part of MGM's Limited Edition Collection, a movies-on-demand program that presents lesser-known titles at a premium price with no frills. It's an initiative similar to ones undertaken by other studios, and one I am all for. Most cinema fans could likely dig through any of these catalogues and find movies they have been waiting for, but that don't necessarily have mass appeal. This is basically the studio meeting the consumer halfway: if you order it, they'll make a copy just for you.

Image quality for The Captive City is so-so. The black-and-white picture is full frame, though the back of the box says "wide screen [sic]." Normally, I would think nothing of this kind of typographical/design error--another disc I have from the line, Not as a Stranger, was the same--except in this case, when I put the disc in my computer and take screengrabs, the black bars on the left and right remain. This would suggest that The Captive City was ported over as an actual widescreen image, black borders and all, and not as a true full-frame picture. In addition to that, the resolution is soft, and there is lots of digital noise and ghosting. Nothing that obscures the image or ruins viewing, but it's noticeable.

Sound:
The soundtrack here is mixed in Dolby and sounds just fine. It's a straight-ahead mix, and there are no volume problems, no drop-outs, nor any hiss or other glitches.

Extras:
No extras. The Captive City is released in a standard DVD-R format with a rudimentary menu and no supplements.

FINAL THOUGHTS:
Recommended. Robert Wise's 1952 crime picture The Captive City is a cautionary tale. This B-movie with a message chronicles the story of a newspaper man (John Forsythe) who discovers the mob has worked their way into his town and doesn't rest until something is done about it, going all the way up the food chain to Washington D.C. and Senator C. Estes Kefauver. Sure, it's heavy handed and sometimes clumsy, but it's also a quick ride that delivers solid punches where required. Just think, though, if more people had paid attention to The Captive City's rally cry to expose the mafia, we might never have gotten The Sopranos. I know they want me to think crime doesn't pay, but when it's put that way, it's hard not to root for the bad guys! 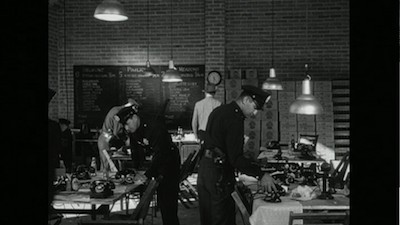