Young Justice - Season One, Volume One 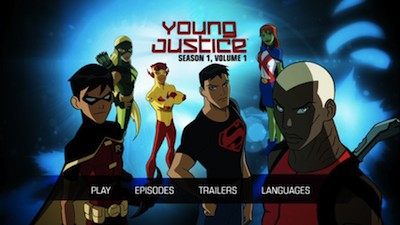 Young Justice is the latest television series from Warner Bros. Animation to make use of the extensive catalogue of characters from DC Comics. Though it might remind some of Teen Titans Go--and indeed, in the comic book world, was essentially born of the same impulse to bring the sidekick characters together under one banner--its tone is easily distinguishable from that previous cartoon. While both are fun adventure serials, Teen Titans Go was more concerned with the fun, while the emphasis in Young Justice is the adventure.

Young Justice - Season One, Volume One collects the first four episodes from the show on one disc. The first two-parter ("Independence Day" and "Fireworks") quickly introduces the characters and the premise. Robin, Kid Flash, and Aqualad, the respective sidekicks of Batman, Flash, and Aquaman, are tired of being relegated to the sidelines. When they are left at Justice League headquarters while the adult heroes go off to fight some cosmic threat they deem too dangerous, the trio decides to investigate a lesser emergency: a fire at a science lab. Once there, they discover that not is all as it appears on the surface--quite literally, actually. The company, Cadmus, has a secret underground facility where they are cloning creatures big and small for unknown purposes. Amongst these "genomorphs" is Superboy, a clone of Superman and a slave to the corporation. The other kids convince Superboy to seize his freedom, and together they break out.

When the dust settles, the boys find their older counterparts are unhappy with their striking off on their own, but now that the kids have tasted independence, they have no interest in giving that up. Reluctantly, the Justice League agrees to let them be their own team, though a covert one that will deal with threats that might be more their speed. They give them an old JLA HQ to make their own, as well as a fifth member, Miss Martian, the niece of Martian Manhunter (and voiced by Danica McKellar from The Wonder Years.) The remaining two episodes on Volume One, Season One show the kids trying to get it together on the field of battle, learning to be a team while taking on the elemental villain Mister Twister ("Welcome to Happy Harbor") and the international crime organization Kobra ("Drop Zone"). These are tightly scripted episodes, showcasing individual missions with specific obstacles that the Young Justice heroes must overcome in order to better earn their place as crimefighters. 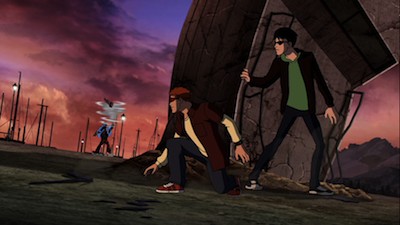 This brief taste of Young Justice is a lot of fun. The animation is slick, with a light anime influence and sparingly used digital effects. The action is fluid and the character designs look great. That the animators could take a lame character like Aqualad (here voiced by Khary Payton) and make him the coolest guy on the team speaks volumes to the level of creativity and craft they are bringing to the table. The stories work well with the standard TV format, and though the writing can skew young, the writers avoid making the weekly "lesson" too obvious. There is also some nice diversity in the group, in terms of personality, ethnicity, and gender.

My only complaint about Young Justice - Season One, Volume One is the DVD is too short. Having only four episodes here seems chintzy, and while the timing of this release is presumably to stimulate interest in the show as it comes back from a mid-season hiatus (episode 9 aired in March, while episode 10 premiered only a few days ago), the choice to stop at four seems misguided. The box art advertises a sixth member of Young Justice, a female archer named Artemis, but apparently she doesn't actually debut until episodes 5 and 6. This left me feeling cheated once the disc was done.

That said, that's more of an issue with the packaging than the content. I enjoyed Young Justice - Season One, Volume One and am eager to see more. Hopefully DVD consumers won't have to wait too long for a second disc and the releases will get more generous from here. 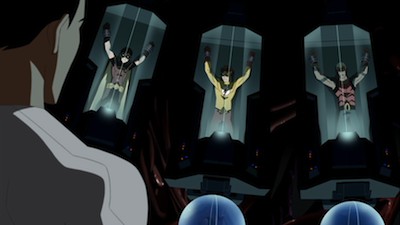 Video:
Young Justice is animated as a widescreen television program, and the anamorphic transfer on the Season One, Volume One DVD offers viewers an excellent presentation, with sharp resolution and vibrant colors throughout. I didn't notice any glitches or problems with the digital authoring, the release is nicely handled.

Sound:
The Dolby stereo soundtrack is excellent with lots of good sound effects and balanced mixing that keeps the dialogue clear. 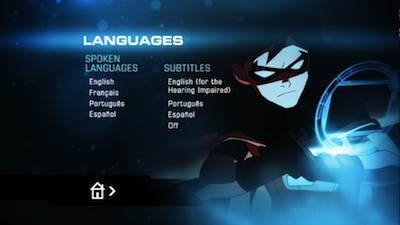 Extras:
Trailers for the new Thundercats and Looney Tunes shows.

FINAL THOUGHTS:
Young Justice - Season One, Volume One is a fun superhero cartoon with a strong hook, great animation, and good characters. The series focuses on famous superhero sidekicks striking out as their own team, learning to cope with the responsibilities of crimefighting and dealing with each other. The program has the right balance of humor, action, and genuine dramatic development to entice fans of the genre regardless of age, even if the material is geared a little young. The first Young Justice disc is slightly disappointing in that it only has four episodes from the ongoing first season, but it's still Recommended as an introduction to what looks to be a pretty cool animated serial. 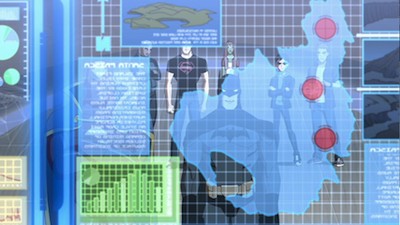