As with Shout! Factory's other Corman titles, The Women in Cages Collection has a big batch of terrific extras, most significantly From Manila with Love, a 50-minute documentary about the making of the first two movies, and featuring on-camera interviews most everyone involved save, alas, for Pam Grier herself.

The high-def transfers, region A encoded, are very good. Despite some minor flaws in both picture and sound all three look pretty swell, and far, far better than you'd ever imagine possible, at least for those of us old enough to remember seeing these at the drive-in or downtown grind-houses. 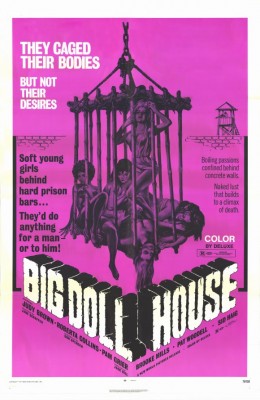 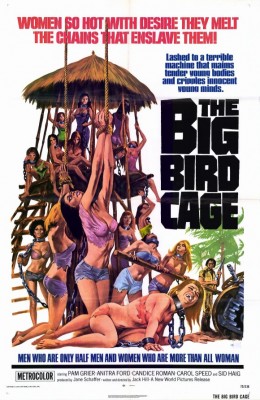 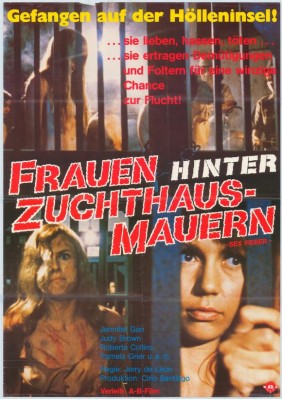 The plots for these women-in-prison films (or, as fans call them, "WiP") are pretty interchangeable, something director Jack Hill readily acknowledges in From Manila with Love. Some of the requisites for such films: the obligatory group shower scene; sadistic and usually lesbian jailers who set their sights on the newest wide-eyed and wrongly-convicted prisoners; lascivious male guards scheming for free sex; outlandish scenes of torture, with contraptions rivaling those of the Marquis de Sade; catfights among the women, often incorporating food fights and/or much writhing in the mud; riots in which the jailers spray the women with a fire hose.

Even though I watched all three movies and took notes, by the end their plots and characters hopelessly began to run together, further fused with similar movies I've seen but released on other labels. Black Mama, White Mama (1973), for instance, is an MGM-owned title directed by Eddie Romero for AIP. Pam Grier's in that, too, and so are Sid Haig and Vic Díaz , "The Filipino Peter Lorre" who livens up Women in Cages with Haig. And like The Big Doll House, Black Mama, White Mama was produced by Eddie Romero and former AIP star John Ashley, who went to the Philippines around 1968 and hung around for the next decade or so, starring in and/or producing various films there, usually with Romero.

The Big Doll House was just the second release from Roger Corman's New World Pictures (1970's The Student Nurses was the first) and its influence was profound in the exploitation field. Made for just $125,000, it grossed an estimated $10 million in the United States alone. It almost single-handedly begat the modern WiP film, and its influence can be seen even in non-WiP Corman films bearing similar titles and sensibilities, e.g., the gangster film Big Bad Mama (1974).

All three pictures helped establish Pam Grier as the undisputed queen of '70s exploitation and blaxploitation movies especially (Foxy Brown, et. al.) and, arguably, as Quentin Tarantino suggests, cinema's first female action star. When she made The Big Doll House her only other credit was a small part in Beyond the Valley of the Dolls, but director Jack Hill realized Grier was a young woman with enormous potential (among other things). Though made in quick succession, the three films here demonstrate her determination to make it as an actress. In The Big Doll House she's obviously a beginner even as she lights up the screen. But in the latter two - playing sadistic, lesbian guard "Alabama" in Women in Cages and tough-talking Blossom, the girlfriend of revolutionary Django (Haig) in The Big Bird Cage - one can already see her abilities and confidence expand enormously.

Grier's growth as an actress over the course of these three pictures was partly Haig's doing, the more experienced actor and longtime Jack Hill-associate coaching her throughout. Haig himself is marvelous in these: relaxed, playful, and hysterically funny, even when playing reprehensible louts. (And in one film Haig pretends to be gay, a sight to behold.) Busy but largely ignored by critics through the '60s, '70s, and '80s, partly through Tarantino and others in recent years Haig has at long last been recognized as one of the great character actors of his generation. He's a treasure.

The women in all these cages are a mix of talent: Roberta Collins, Anitra Ford, Carol Speed, Candice Roman, Judy Brown. Some were former models, others serious aspiring actresses. They went to the Philippines as a lark, some like Grier capitalizing on the experience. Most were cast for their looks, but talent was always a consideration and the acting ranges from just okay to surprisingly (and overall consistently) good. The Big Doll House, for instance, features serious Shakespearian actress Kathryn Loder as that film's requisite sadistic-lesbian warden, Lucian. With her stick-thin body (the result of diabetes), scowling, saucer-eyed face, she's like Barbara Steele's American cousin, and her wildly theatrical performance is both hilarious and unforgettable. (What's more, it probably directly inspired the casting of the real Barbara Steele for Jonathan Demme's Caged Heat three years later.)

Jack Hill's direction is quite intelligent for such low-budget movies, though like Roger Corman's films there's been a tendency to read far too much into his work. Hill himself admits to being baffled by critics who see a political subtext in these pictures. But they are exceptionally well made, especially when compared to most of the atrocious imitators that followed, particularly from Italy, which soon spun the genre off in yet more dizzying directions, including the thematically similar nunsploitation and Nazi exploitation films. The Japanese also made terrible imitations as well as the all-time best examples of the genre, especially the superb Female Convict Scorpion - Jailhouse 41 (1972).

The three films are presented in their original 1.85:1 format. (Roger Corman pay extra for anamorphic lenses? Forgetaboutit!) The mono audio has its share of snaps, crackles, and pops, and the film elements have their minor imperfections, but overall these titles look great, with sharp resolution, accurate color, and good contrast, better surely than they did projected by inadequate bulbs onto drive-in screens. Liner notes state, "We used the only available source material for the audio on Women in Cages, which was not in pristine condition. ... Two separate film elements were used to put together a complete version of The Big Bird Cage - a CRI and the original negative, which had been cut at some point." Considering, these are not major distractions. The Big Doll House gets its own disc, which is also where most of the Special Features are located, while The Big Bird Cage and Women in Cages are paired for Disc 2. All are Region A encoded.

The aforementioned From Manila with Love is funny, informative, and interesting, and features on-camera interviews with Corman, Hill, Haig, Brown, Ford, Roman, and others, including (in older footage) Roberta Collins, who died tragically in 2008. Hill also contributes audio commentaries for his two films. Excellent image galleries, including behind-the-scenes photos and ad art is included, along with trailers and TV spots (narrated with gusto by the familiar Ron Gans), some of which unfortunately are spoiled by a mastering flaw that renders them in something like pixilation.

This is another great set of they-don't-make-'em-like-that-anymore movies, features unbound by political correctness yet infused with too much intelligence to dismiss as crass exploitation. Shout! Factory does these films right, and the set comes Highly Recommended.