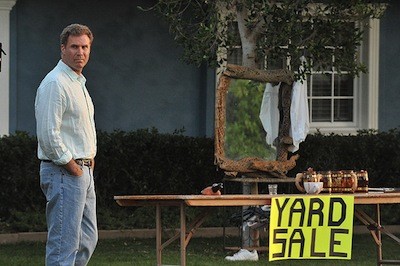 Nick Halsey is having a bad day. He's lost his job after sixteen years, having worked his way up from being a salesman to a vice-president, and when he got home after being canned, he found all of his personal possessions out on the lawn and the locks to his house changed. A struggling alcoholic who has been sober for less than six months, Nick understandably sees this as a good time to go off the wagon. It may not seem to make things better from an outside vantage point, but it definitely helps if you're stuck on the inside looking out.

This divide between the alcoholic's need for his juice and the sober world's rational belief that he's had too much is an essential part of Raymond Carver's fiction, and it's one of the author's masterful short stories that provides the kernel from which first-time writer/director Dan Rush builds his movie Everything Must Go. Will Ferrell stars as Nick, the drunk who is rapidly losing control of his own life. With no car, no money, and no cell phone left to his name, Nick decides to set up camp on his front lawn. If all the things he owns have already been moved out there, it's as good a home as any, so why not? As silly as it sounds, maybe that's one thing he can control: sitting in his easy chair under the stars and getting blotto on Pabst.

Everything Must Go tracks Nick's progress over the course of several days. His neighbors, including a smarmy Stephen Root, have complained to the police about the inebriated eyesore cluttering up their 'hood, but since Nick's Alcoholics Anonymous sponsor (a quiet Michael Pena) happens to be a police detective, strings are pulled and Nick is allowed to stay where he is under a city ordinance that allows for any one residence to have a yard sale for a maximum length of five days. At the end of that time, Nick has to be out. With the help of a latchkey kid from up the block (Christopher Jordan Wallace) and the pretty pregnant woman who just moved in across the street (Rebecca Hall), Nick keeps it together just long enough to figure out that his next best move is to shed himself of all this junk and try once again to move on.

Dan Rush could have gone any number of ways with his movie, most of which would have led him to a pretty hokey place. A quirky indie drama has as much chance of descending into mawkish sentiment as a swing-for-the-fences crowd pleaser, and Rush thankfully avoids both options and shoots for something down a more honest middle. Everything Must Go does eventually end up in a good place, sure, but not without some believable bumps in the road. It also doesn't attempt to sell an easy fix at the conclusion. You don't leave the theatre thinking Nick has it all figured out. It's more that today is going better than yesterday, and tomorrow is anyone's guess.

Will Ferrell is an excellent choice to play Nick. I think audiences should be long past being surprised that a comedian can also be a strong dramatic actor, but it doesn't hurt for a guy like Ferrell to make a movie like Everything Must Go every once in a while to remind us that he's not just the clown who makes mediocre sports comedies. The actor hasn't been this good, or this restrained, since Stranger than Fiction in 2006. He resists his urges to go big with the material and instead stays true to the moment. Which isn't to say he isn't funny, Ferrell manages to find understated humor in many things. The trick is, he lets the jokes sell themselves rather than forcing them into being.

The whole movie is like that, actually. Despite the fact that you can boil its plot down into a high-concept one-sentence pitch--"Will Ferrell gets thrown out of his house and decides to live on the front lawn and have a yard sale"--it doesn't contrive its scenarios. Rather, Rush lets each development actually develop out of the uncommon situation. Some of the components don't work as well as others--the discovery of Root's conjugal habits is a little silly, and the side plot of Nick reaching out to a high school sweetheart (Laura Dern) has a better pay-off than the set-up might suggest--but I still never got the sense that Rush was trying to sneak anything by me. He's actually trying to forge some honest relationships here. The scenes with Ferrell and Hall in particular exhibit a comfortable pathos.

Everything Must Go can typically be the kind of movie that audiences miss out on. It's not one the studio will likely push heavily, scared of how to deal with Will Ferrell deviating from formula. It's a film with more heart than hook, one that does its job and does it well. It won't change your life, but at least you'll enjoy it for an hour and a half. Don't miss it if it's playing near you.