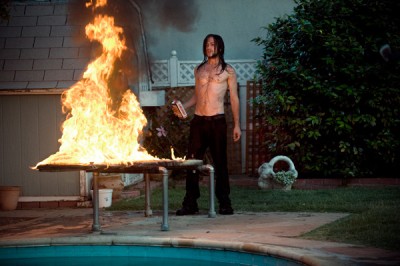 There's a real uncertainty in the early scenes of Spencer Susser's Hesher; What're they up to here? I kept asking myself. What are they trying to do? It's hard to tell if the film is going for black comedy, sociopathic drama, or cheap thrills; by the time it ends, it's still hard to say. There are scenes that are funny, others that are creepy, and then there's Rainn Wilson, playing an empty shell of a widower and doing it absolutely straight. It almost feels like Susser and co-writer David Michôd (who wrote and directed the brilliant Animal Kingdom) decided to lock all their wild ideas into a room and let them fight it out.

In the title role, the gifted Joseph Gordon-Levitt ends up shouldering most of the heavy tonal shifts; he has to pivot from funny to scary to odd in a blink, and does so with finesse. He plays a long-haired troublemaker who invites himself to live in the garage of T.J. (Devin Brochu) and his family, after T.J. inadvertantly gets Hesher kicked out of the housing development he's been squatting in. Hesher appears in T.J.'s living room, accompanied (as he often is) by a quick metal chord, to ask "Where's your laundry room?"

T.J.'s home life is in such a shambles that a stringy-headed burnout with a giant middle finger tattooed on his back can actually move in without anyone really asking about it. T.J.'s mom died in a car wreck a little while back; he lives with his dead-eyed father (Wilson) and cheerful if clueless grandmother (Piper Laurie). He's picked on by bullies at school; when one of them attempts to beat him up in the parking lot of "Charlie's Food Town," the fight is busted up by a kind checker girl, Nicole (Natalie Portman, in ugly glasses and unfortunate hair). "So I guess I'm kind of a hero now, huh?" she asks, pleased. T.J. develops a crush on her.

As Hesher stays longer, he slowly becomes T.J.'s wildly out-of-control Id; he's clearly out of his mind, but he says and does things T.J. only wishes he could do (like setting the bully's car on fire), and hey, he gets results. It's a funny performance, perched right on the edge of dangerous stupidity and knowing wisdom, full of little bon mots like "Human beings have been pokin' vagina for hundreds of years. Longer, probably."

Through much of the film, it's hard to guess what weird direction it's going to spin off in next--which is a compliment, I suppose. Some of it is pretty childish, shocking us solely for the sake of shocking us, in scenes where Hesher gives a foul-mouthed funeral speech or smokes a bowl with grandma. Some of it fumbles in reaching for pathos, as in the graceless slow-motion final scene. And some of it is working too hard to be dark and edgy.

I can't help but wonder, though, how many of the real and honest complaints about Hesher are inconsequential. It's wildly uneven, a hot mess really, but even the filmmakers seem to know that; if one thing is clear, it's that they're not even attempting a clean, neat, "well-made" film. Nothing holds togther, not really, but it's got all this great stuff in it--some of it barely connected, some of it way inconsequential, but it's there.

Ultimately, the film lacks the confidence and certainty in its gonzo storytelling required to create the kind of unique film-going experience the filmmakers seem to have hoped for. They don't quite pull it off. If they had, though, Hesher would have really been something.