UPDATED 8/4/11: A number of eagle-eared viewers have pointed out an apparent audio error on this release that affects a notable portion of the original score. Please see the "Video and Audio Quality" section for more information. If you'd like to contact Universal and voice your opinion, you can do so here.

Originally created in the 1930s by short-lived author Robert Howard, the character of Conan the Barbarian has seen a number of incarnations over the years, including an upcoming filmed re-adaptation of Howard's original stories. Most fans were introduced to the Conan during this loose 1982 production, directed by John Milius and starring Arnold Schwarzenegger in his first major role. Utilizing a $20M budget with plenty of little-known actors, it's easy to see that almost every dollar ends up on the screen: Conan is an epic in every sense of the word, thanks to plenty of great action, vast landscapes and a fantastic score by Basil Poledouris. Those who want to enjoy it the most will have to check their brains at the door, but it's still a fun ride while it lasts.

At just over two hours in length, this sword-and-sorcery epic introduces us to a multitude of characters: Conan (Schwarzenegger), who sees his parents and neighbors murdered by Thulsa Doom (James Earl Jones) and his warriors, is made a slave and spends his young adulthood as a manual laborer. He's eventually sold as a fighter and trained extensively in combat, eventually set free by his master. Soon after, Conan befriends an archer named Subotai (Gerry Lopez) and a thief named Valeria (Sandahl Bergman)---and soon enough, our trio of outcasts steals a valuable jewel from Thulsa Doom's cult of snake-worshippers. After being arrested by King Osric (Max von Sydow), the king tells them about his estranged daughter who has joined the cult. Our heroes are eager to go after her: not only will they help the king, but Conan will have a chance to avenge his slain parents.

It's a somewhat bulky story weighed down by a bit too much philosophy, but Conan the Barbarian moves at a pretty good clip. Much like Gladiator and countless other stories in a variety of genres, this rags-to-riches tale can't hide its formula, even though it's easy to get lost in the film's formidable scope. Co-written by Milius and Oliver Stone (who had a more futuristic tale in mind), the film's dialogue, pacing and production design are all above average. Performances are generally good all around...even from the limited Schwarzenegger, who would go on to star in many more films that focused on his physical attributes. But Basil Poledouris' sweeping score is probably the unsung hero here, carrying much of the film's emotion and heft with ease. No matter if you saw Conan almost thirty years ago or now's your first time, it's a satisfying action epic from start to finish.

Originally released on DVD by Universal in 2000 (and again in 2002 as a well-rounded Collector's Edition), Conan the Barbarian makes its Blu-Ray debut in surprisingly solid fashion...this isn't Predator, folks. Featuring a rock-solid technical presentation and all of 2002's notable bonus features---along with a few minor additions, of course---this is a perfectly acceptable upgrade from a DVD that's really starting to show its age. Let's take a closer look, shall we?

NOTE: Unlike the 2002 Collector's Edition DVD, this Blu-Ray includes the original 129-minute cut of the film. As this accounts for roughly one minute's worth of "less" footage, it's a small difference but still worth noting.

Presented in its original 2.35:1 aspect ratio, this 1080p transfer of Conan looks noticeably more crisp and film-like than the aging 2002 Collector's Edition DVD. Much of the dirt and debris has been carefully scrubbed away, while strong textures and a satisfying layer of film grain are revealed below the surface. Still, this isn't a perfect presentation: a few instances of digital noise reduction and edge enhancement can be spotted along the way, but all of the other imperfections seem to be related to the film's source material. Overall, this is a perfectly acceptable video presentation that fans should be pleased with.

More good news on the audio front: a rather enjoyable 5.1 DTS-HD Master Audio track is included, which gives action sequences and Basil Poledouris' score a much-needed boost. Rear channel activity is tasteful but typically limited to music and background effects. Overall, the mix is well done and breathes new life into this near 30 year-old film, but it's still odd that the original mono track wasn't thrown in for good measure. Optional English SDH, French and Spanish subtitles are provided for the main feature and the extras.

UPDATED 8/4/11: A technical issue has been brought to my attention; specifically, several portions of the film that suffer from audio errors. These scenes (the initial attack on young Conan's village, the final battle, and several others) should have a choral section during Basil Poledouris' "Riders of Doom", but it had been mistakenly omitted from the new audio mix. This problem was also present on the UK Blu-Ray's English track earlier this year and has not been corrected for this release. Although my ratings and recommendation still stand, I felt it was necessary to inform buyers of this error. A region-free Hong Kong Blu-Ray (available here) does not appear to share the same fate. Thanks to readers Scott Burton, Tyler and "Dark Light" for this valuable info!

Seen below, the menus are typical for Universal releases: they're easy to use and set the proper mood, but still a little cumbersome. This 129-minute film has been divided into over a dozen chapters, no obvious layer change was detected and this release appears to be locked for Region "A" players only. This one-disc release is housed in a standard Blu-Ray case with one-sided artwork and no inserts. 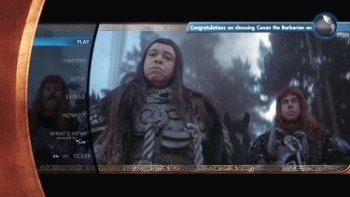 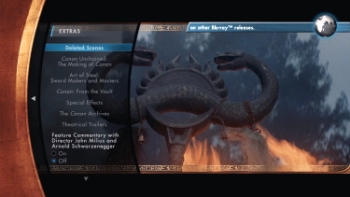 Bonus Features
All of the notable extras from the Collector's Edition DVD have been ported over (sorry, production notes), but the new content runs for less than 30 minutes and doesn't add much to the package. These new extras include "The Art of Steel" (15 minutes), a brief documentary about the film's weaponry and sword-making in general, as well as a collection of Vintage Interviews with Arnold Schwarzenegger, John Milius, James Earl Jones and more. Overall, these on-set interviews are highly promotional in nature but still pretty neat to see. Both of these extras aren't visual stunners, unfortunately: the first suffers from notable interlacing problems, while the second is...well, a collection of 30 year-old promotional interviews. In any case, they're still worth a look.

Still on board from the previous release is a laid-back Audio Commentary with Schwarzenegger and Milius, the excellent "Conan Unchained" behind-the-scenes documentary, a short collection of Deleted Scenes, a quick Special Effects featurette, the promotional "Conan Archives" slideshow and a few rough looking Trailers. Again, all bonus features include optional English SDH, Spanish and French subtitles, which is typical for a Universal release.

Conan the Barbarian is a good popcorn flick, bolstered by great action sequences and a rousing score. While it doesn't stick to the original source material very well, this 1980s epic is enjoyable in its own right...thanks in no small part to Arnold Schwarzenegger's breakout performance, of course. Universal's Blu-Ray manages to beat out their well-rounded but aging Collector's Edition DVD in all categories, although more new extras would've been appreciated. Overall, this is a great disc that fans should enjoy in preparation for the upcoming Conan theatrical film. Recommended.

NOTE: The above screen captures have been taken directly from this Blu-Ray release, but they do not represent the format's native 1920x1080 resolution.