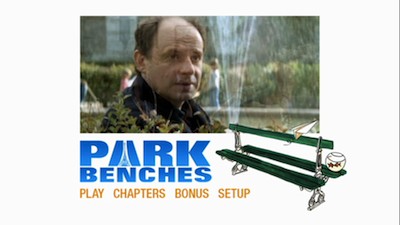 If this review had a headline, and I had titled it "Much adieu about nut-things," would you have read it and snickered? If so, have I got the movie for you! Park Benches has all the subtitled puns you could ever hope for. You're welcome. Stop reading now and go track down this DVD.

For the rest of you, avoid Park Benches at all costs. This 2009 French movie written and directed by Bruno Podalydès, who also stars, is a comedic misfire on every level. It's the kind of movie where midway through, you start wondering what kind of person sat and read the script and said, "I'll do it. I'll give you millions of francs and let you make your masterpiece." And then somehow from there, a legion of French actors--including the great Catherine Deneuve and reliable contemporary stars like Mathieu Amalric and Chiara Mastroianni--also decided to lend their names to this claptrap, even if their images on the poster seem to last longer than the scenes they are in. Insult to injury, someone then had the bad idea to import this to America. Mon dieu, why?!

I'm going to try to describe Park Benches as simply as possible: it's a three-part film, with one part serving as bookends to its other extended sequences. The framing sequence takes place in an office where three women, including a fetching middle-aged number cruncher (Florence Muller), spot a banner hanging from a window outside the apartment building opposite. It says "Lonely Man," which causes them to worry that the tenant in that apartment is going to hurt himself out of despair. Not too worried, mind you. Lonely Man is either not home or not answering the door, so once lunchtime comes around, they go to take their break. His suicide can wait! 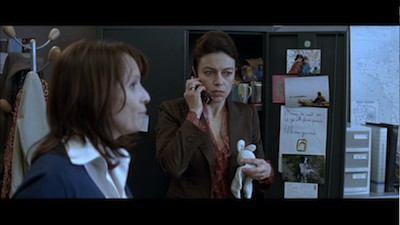 The second sequence takes place in a park, and a variety of characters, including the women from the office, wander in and out, interacting with one another, sharing banal conversations about health, love, and other everyday troubles. There are new parents trying to lull their baby to sleep, old men playing backgammon, a teacher who meets a former student, a homeless fellow off his rocker, mothers and children, retirees with remote-controlled sail boats, and many others. None of them get much screen time or anything substantial to do. The expectation is that these experiences will all connect somehow, and I suppose one or two of them eventually do, but not so that it matters.

Sequence three is constructed in a similar fashion, but the scenery changes. This portion of the movie is set in a dysfunctional home improvement store run by an eager manager who isn't nearly as slick as he thinks he is. Fittingly, this part is played by Bruno Podalydès himself. He may have zero facility for wordplay, but apparently irony is not lost on him (or maybe it is). Customers stumble through the store, interacting with the clueless sales stuff. Some of the characters are from the park, others are new. The woman from the office is there. Catherine Deneuve finally pops her head in at the hour-and-twenty-minute mark. The humor shifts from the earlier banter to slapstick, and though there seems to be some basic attempts to create metaphors from the customers' various problems with drills and glue and rotting cabinets, don't rack your brain too hard. This is a sequence that ends with a giant balloon exploding and everyone talking in high-pitched voices courtesy of the sudden release of helium. And here we thought Hollywood was evil because they make Chipmunks movies. At least we don't pretend it's art.

It's difficult to tell you exactly what is wrong with Park Benches, because what exactly is wrong is everything. It's not funny, it's not romantic, it's not even remotely insightful. The actors show up and hit their marks and go home, and were the final product less competently constructed, I would say that once they do, the man behind the camera struggles to put it all together; however, I don't think there is any struggle at all, I suspect Bruno Podalydès made the film he set out to make. My guess is that he intended Park Benches to be an ensemble piece in the style of Robert Altman, where a grand cast waltzes through each other's existences, finding random connection and humor in the shared act of living. Oh, but what hubris! Altman regularly directed himself and his cast out onto tenuous tightropes where it was just as likely that they would fall as make it across. This was his genius, and though he made as many stinkers as he did winners, there was always a sense that he was daring to try. No such effort appears to be driving Park Benches. Podalydès plays it safe from beginning to end, tiptoeing around anything meaningful or truly funny and relying instead on cliché and worn-out gags. You might howl at how awful it is if it wasn't so dull in the process. Hell, the big payoff of the "Lonely Man" sign is that it was a joke that accidentally yielded results, the complete opposite of Park Benches as a whole: a contrived, self-satisfied film that fails to do anything. 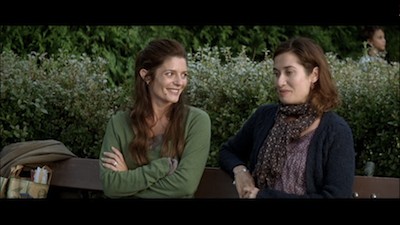 
Park Benches comes to DVD as an anamorphic widescreen transfer presented at a 2.35:1 aspect ratio. It looks really good, with decent resolution and strong colors. Neither here nor there really, a very solid job on the part of the DVD producers.

Sound:
The French soundtrack is mixed in 5.1 stereo, and though the volume is nice and everything sounds clear, there is not much interplay between the speakers. The audio is pretty well centered and mostly up front.

Subtitle options are English and Spanish.

Extras:
The disc has a surprising amount of extras and bric-a-brac, taking us behind the scenes and showing us some of what went into the movie. And trust me, most of the bonuses are as big a waste of time as the film itself. 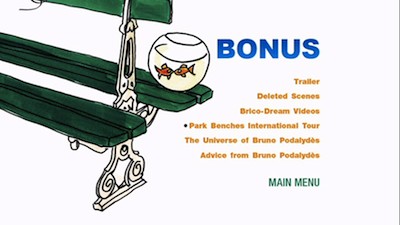 First on the menu are the U.S. trailer and over 15 minutes of deleted scenes and alternate takes. Watch an unfunny filmmaker struggle with his own inability to tell a joke! A few of the scenes show some of the younger characters from the park, most of whom got marginalized in the final cut. The bulk of them are just more of what we've already seen in the main feature, nothing significant. The "Brico-Dream Videos" are the uncut commercials we see in the background in the hardware store.

A seven-minute segment called "Park Benches International Tour" is not so much a tour as it is one stop in what is presumably Spain, and the whole featurette is shaky hand-held footage of Bruno Podalydès answering questions in front of an audience.

The eight-and-a-half minute "Universe of Bruno Podalydès" is a strange video diary of some museum exhibit in Versailles. It's unclear if this is something the director has put together or if it's just something he appreciates, there is no narration or further explanation; it's just him walking through this museum filming everything. It's an extreme waste of digital space. Worse is the three-minute "Advice from Bruno Podalydès," which consists entirely of the filmmaker reading the directions off a spray product that weakens whatever you want to dig or drill into. No justification is given as to why Bruno has decided to share this; presumably, it's just more of his "humor." 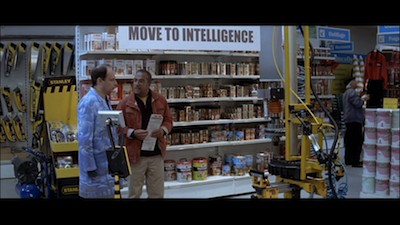