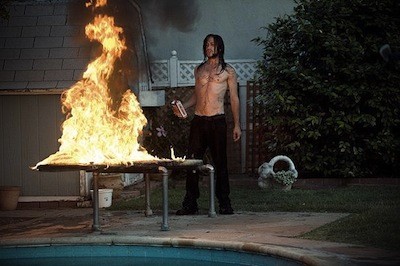 Sometimes in life, something or someone comes along exactly when we need it. That's at least what I've learned from Afterschool Specials--which, at times, the new movie Hesher resembles. There is a scene where T.J. Forney (Devin Brochu), a boy small for his age, stands by himself on a balcony at his high school. Soft music plays as the camera pulls back, revealing a banner for a spirit rally hanging just below him--the sad implication being that T.J. will never go to that rally, his spirit is broken, and school sucks. Welcome to Hesher, the most messed-up Afterschool Special ever!

The right person at the right time for T.J. is a long-haired, heavy-metal dirtbag who calls himself Hesher. Hesher is played by Joseph Gordon-Levitt, who is shirtless for most of the movie so he can show of his sweet tatts. On his chest, a stick figure blowing its brains out; on his back, a middle finger. Hesher is a force of pure mayhem. He meets T.J. the morning the boy angrily tosses a rock through the under-construction house where Hesher is squatting. His cover blown, Hesher needs a new place to crash. He shows up at the suburban home where T.J. lives with his dad (Rainn Wilson) and grandmother (Piper Laurie). It's a pretty depressing place. For one thing, Grandma likely hasn't changed the decorations since the 1970s; for another, T.J.'s mother was recently killed in a car accident and his dad is stuck in a drug-induced stupor, clinging to his grief as if his own life depended on it.

Hesher is a new movie by Spencer Susser, who co-wrote the script with David Michôd from a story by Brian Charles Frank. As a fictional narrative, it exists in that place where disbelief must be suspended enough to accept that major life changes can happen without anyone so much as questioning them, and crime and vandalism can be perpetrated on an unsuspecting public with no retaliation. This is Hesher's role in T.J.'s life, to inflict chaos on the boy and shake him out of his prolonged mourning. T.J. won't always like it, either. Hesher is crude, selfish, and violent. He does what he wants when he wants it, and about the only thing he respects is little old ladies. He will cause trouble for T.J. and then leave the boy to deal with the fall-out. Hesher won't pull him out of the toilet when a bully sticks his face into a urinal cake, but he will scrawl filthy graffiti on the same bully's car. It's not about writing wrongs, it's about getting even. 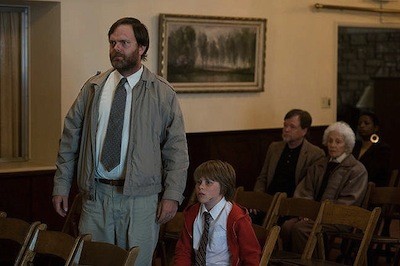 It actually occurred to me midway through Hesher that this is likely the closest we are ever going to get to a live-action adaptation of the Calvin & Hobbes comic strip. Imagine Devin Brochu as the daydreaming Calvin and Joseph-Gordon-Levitt as his imaginary friend, the stuffed tiger Hobbes. The striped cat has no problem going along on the adventures and even instigating them, but he can't (won't) be held accountable. This would make Natalie Portman the Suzie Derkins of the piece. She plays Nicole, a grocery clerk who helps T.J. out when he's attacked in the parking lot outside her store. They become unlikely friends, though the truth is T.J. has a crush on her. She will get hijacked into Hesher's shenanigans, as well.

The best thing that Hesher has going for it is its unpredictability. For most of the movie, you can't really foresee its various moves. As a character, Hesher is unhinged to such a degree, his ever next action could go any which way that pleases him. Gordon-Levitt completely commits to the part, playing Hesher as the unleashed Id. It's a physical performance, requiring decisive movements and complete control of the space around him. There is no soft touch in Hesher's repertoire. Every thing he does is done with the force of double kick on a bass drum. He doesn't eat his dinner, he stabs it with his fork and then stabs it into his mouth. He also unleashes the best fart gag I've seen in a long while. Brochu does a good job keeping up, though much of T.J.'s role is standing there in horror and confusion as his foul-mouthed pal goes crackers.

When Hesher suffers, it's when you can start to guess where it's going. T.J.'s dead mother is the elephant in the room, and between the kid's efforts to buy the car she died in back from the junkman and the uncomfortable counseling sessions his dad takes him to, the depression is never far from sight. The final act of the film goes into territory we've seen many times: the anti-hero disappoints the boy, the boy stands up for himself, the anti-hero commits to one last act of anarchy to finish the job, putting father and son back on track. It's not that Hesher gets bad, but it does start to drag. There's too much apologizing, too much speechifying. Portman gets to say her piece, Wilson cleans himself up...it all comes right when you expect it.

Which, of course, could get Hesher cast as a crowd-pleaser by some, though I can't imagine they are the same people who sat through the movie's first hour giggling over how awful the people treat each other and the scandalous nature of all the gags. (In this way, it's a little like Jodie Foster's The Beaver, another recent movie with a schizophrenic tone.) Enjoying Hesher requires a dark sense of humor and a healthy disrespect for convention. Hesher sets out with a mischievous spirit that the movie thankfully regains in its closing scenes, partially unringing the normalcy bell it should have never touched in the first place. It's still not the giant middle finger I was hoping for, but it will do.