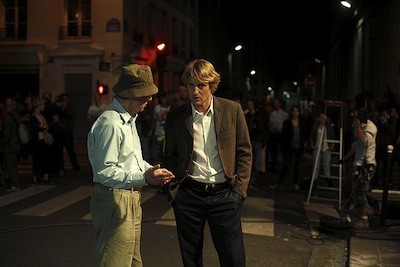 Well, Mr. Allen, it would appear you still have the ability to surprise and delight me.

Don't get me wrong, I've enjoyed plenty of your recent movies, particularly the ones with Scarlett Johansson. And it's not just because I love Scarlett Johansson--though I suspect we have some very similar thoughts on the lady (and not just the obvious ones that most people think; my readers can be so bourgeois!) You've had several very good films in the last six years, and a few merely okay ones. Even the good ones, though, are what they are. They hit a certain predictable level, they never took me unaware. Not like Midnight in Paris.

Now, granted, I maybe walked into those movies armed with a little more foreknowledge as to their plot. How I managed to avoid learning what Midnight in Paris was really about is beyond me, particularly given my affinity for some of the details you include in your love letter to the legendary city. I knew it starred Owen Wilson as a man engaged to Rachel McAdams, and that Wilson's character, Gil Pender, was more romanced by Paris than his fiancée. I also picked up that Michael Sheen represented a kind of threat to this young couple, that he was, shall we say, more intellectual and sophisticated, than his neurotic rival. At the same time, Gil's head would be turned by more than architecture, and likely, the whole thing would be a criss-crossing examination of commitment and dreams and the reasons couples go together in the first place. 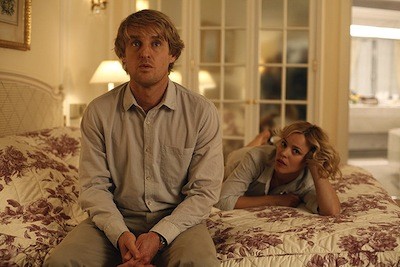 Again, this is Woody Allen territory. No surprise there. You can get that from just a cursory glace at the trailer. Sharp viewers might even be able to figure it out from the poster. That poster also promotes the fact that Adrien Brody, Kathy Bates, and Marion Cotillard are in the film, and had I been pushed to guess, honestly, Marion Cotillard would have to be Owen Wilson's temptation (and I'd have been right). The funny thing is, those three aren't in the first fifteen or twenty minutes of Midnight in Paris, which is exactly how long my uninformed impressions of the film held true.

And then...whammo! Here comes the curveball.

I feel like I should say "spoiler alert" here, but that seems kind of silly since I am faking a conversation with the guy who wrote and directed Midnight in Paris, to whom none of what I am about to say should be a surprise. I also have a feeling that later trailers must have given this stuff away. I mean, how long did you keep it a secret that Jeff Daniels steps out of the movie screen in Purple Rose of Cairo? That's what the movie is about! And given how similar the flights of fancy are between your older movie and this new one, and how this fictional conceit ends up informing the life of the character to whom it happens, comparisons between Purple Rose of Cairo and Midnight in Paris are inevitable. That should be on the poster. "From Woody Allen, the man who brought you Purple Rose of Cairo." 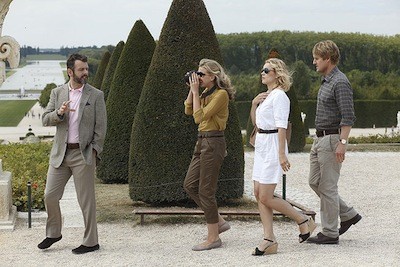 As it goes, I'm just sitting there watching Owen Wilson be sad because Rachel McAdams wants to hang out with annoying people and fails to see the magic in the rich creative history of Paris--or, for that matter, the creative present of her husband-to-be. Gil is a writer who has wasted his talent on cheap Hollywood screenplays and is now trying to complete his first novel. It's a book about a man who runs a "nostalgia shop," named Out of the Past, presumably after the old Robert Mitchum and Jane Greer movie, because that's just what a guy who sells memorabilia from eras long gone would do. Obviously Gil's protagonist is just an analogue for Gil, a man who believes he was born in the wrong time, who longs for an idealized past, which is exactly what Gil is thinking about when a classic Peugeot turns the corner and stops in front of him. The people in the car motion Gil over, convince him to jump in, give him champagne, and take him to a party.

And, oh, what a party it is! Cole Porter music, conversation about the work of F. Scott Fitzgerald, the works. The catch is, that's really Cole Porter at the piano, and that's really Scott and Zelda Fitzgerald (Tom Hiddleston and Alison Pill) that Gil is talking to. He has been transported back in time! The rest of the movie is Gil taking full advantage of whatever temporal anomaly he has stumbled into. At midnight, he climbs into the car and goes back in time to meet his idols; in the morning, he returns to his disappointing present. In between, Gil must sort out what is happening to him, relating it to the themes that he is exploring in his novel, and then relating that further to what it means to him as a person. It's a scenario too good to be true, every one of his literary and artistic heroes turns out to be exactly as he expected them to be--but then, this is his fantasy, isn't it? You wouldn't travel back in time to meet Muhammad Ali just to sit on the couch and watch him eat potato chips. You'd want him to talk in rhyme and shadow box right in front of you! Likewise, you'd want Ernest Hemingway (Corey Stoll for Law & Order: Los Angeles) to talk in clipped prose about bullfighters and give you writing tips.

I mean, that's what I'd want, Mr. Allen, and that's what you deliver. Midnight in Paris is a delightful, witty movie. It even gets poignant in its final scenes. Owen Wilson is surprisingly good playing the motormouthed stand-in for yourself, and all of your supporting actors are so perfectly cast. They latch onto these bygone personalities and refuse to let go. All the performers are clearly having fun. Alison Pill is absolutely train-wreck charming as Zelda Fitzgerald--though, the implications of Gil giving her valium are a little weird--and Corey Stoll attacks the Hemingway material like an unstoppable elephant. Maybe the most fun, though, is Adrien Brody, who only has one full scene, but he pretty much steals the whole movie. "Dali!"

Marion Cotillard is also extremely charming and she is easy to buy in the role of the ineffable muse. If I had one complaint, it's that I wish there had been just a tad more romance here. The scenes with her and Wilson play it safe, and we never get to see her be the volcano she is once described as being. There is no agony in the choice Gil must make, it's pretty obvious how it's going to go--that's the lesson he must learn, after all--and if you learned anything from the writers you are portraying, it's that the drama comes out of the choice being too difficult. Rachel McAdams is adorable, but let's be honest, the character she plays is rotten, start to finish.

It's not enough of a complaint to have ruined the warm glow I had after watching Midnight in Paris. I just don't want to overdo and pretend it's a perfect movie--even if it is perfectly wonderful to watch. Like the myths of the city it depicts, Midnight in Paris is its own inscrutable thing. It couldn't happen anywhere else, and it could happen with anyone but you, Mr. Allen. My hat is doffed in your direction. 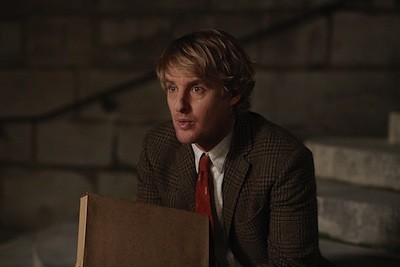