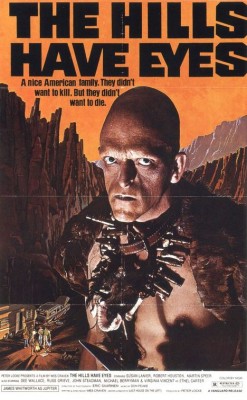 Master of Suspense Wes Craven began his career with two brutal, survive-and-avenge shockers: The Last House on the Left and The Hills Have Eyes. The former is effective, if not particularly polished, home-invasion terror, while the latter paints its violence on a broader desert canvas. Both films put a family through hell, and each features a set of sub-human villains. The Hills Have Eyes takes the edge for suspense and brutality when it places a group of travelers at the mercy of some inbred hill-dwellers. The brutal realism of Craven's horror classic remains frightening, and The Hills Have Eyes is no less effective today than when it was released in 1977.

In what must surely be the vacation from hell, the Carter family is traveling to California via the desert so Big Bob Carter (Russ Grieve) and Ethel Carter (Virginia Vincent) can search for some silver to commemorate their 50th wedding anniversary. Also riding in the station wagon or a connected trailer are the couple's teenage children Bobby (Robert Houston) and Brenda (Susan Lanier), as well as their elder daughter Lynne (Dee Wallace), her husband Doug (Martin Speer) and her baby daughter. Also joining the caravan are the family's German Shepherds, Beauty and Beast. A gas station attendant warns Big Bob to stick to the main road, but Big Bob ignores him. Before long, the car is immobile thanks to a snapped axle.

Craven quickly puts the family in hostile territory, surrounding the characters with barren landscape, desert predators and "the pack," a group of deadly cannibals intent on keeping trespassers off their land. The area of desert in which the Carters find themselves is a nuclear testing site, and the area residents suffer the effects of radioactive fallout. The predators quickly go about separating the family. Big Bob and Doug walk in opposite directions to find help, and Bobby chases after one of the dogs. Unsuspecting and alone, each family member underestimates the gravity of their situation.

The Hills Have Eyes is particularly brutal in the way it allows its characters to meet their bloody end. No one is safe, and the film sees man, woman and child fall victim to the pack. The most disturbing scene is the trailer siege, when cannibals Mars (Lance Gordon) and Pluto (Michael Berryman), whose face is used in most of the film's key art, create a diversion before raping Brenda and ambushing Ethel and Lynne. The violence is not as explicit as that contained in Alexandre Aja's 2006 remake, but the scene is terribly effective with its close-range gunshots and quick-splatter images of the baby in peril.

The nuclear-fallout origin of the villains is simple and effective. Papa Jupiter (James Whitworth) controls Pluto and Mars with some choice words over a Walkie-talkie, and the cannibals are first heard stalking their prey and only seen later in the film. The Hills Have Eyes effectively builds suspense by keeping the lid on before allowing steam to explode in the final reel. Of course the Carters seem like a normal American family, so what happens to them is especially heinous. The Hills Have Eyes never guarantees a character will live, but I found myself cheering when each put up a fight. And that includes Beast, who takes revenge on his attackers. Craven's newer films lack the edge of his classics, but those hungry for the director's early work will appreciate that The Hills Have Eyes has aged very well.

So here is the rub: Image Entertainment appears to have slapped The Hills Have Eyes on Blu-ray using a standard-definition master, or, to put it more dramatically, it is basically an upconverted DVD. Because the film was shot on Super 16, the 1.85:1/1080p/AVC-encoded transfer could never sparkle like something sourced from a digital intermediate. That said, there are problems that extend past the film stock. Image licensed The Hills Have Eyes from Anchor Bay, who released a fairly decent DVD of the film back in 2003. An extensive print clean-up took place at that time, so the Blu-ray's image is mostly free of specks, scratches and dirt. Unfortunately, edge enhancement is a significant problem. It was likely used on the SD Master and present on the DVD, but it is an even bigger problem on Blu-ray. The image's grain structure is also problematic. While some shots look natural, there are spots where detail is lost and the image looks splotchy. There are also issues with aliasing, especially in some wider shots of the desert. At least colors and skin tones are generally good, with minimal bleeding. Blacks do crush during the darkest scenes, but this is characteristic of the Super 16 source, which also limits contrast, depth and texture. I am not sure why Image decided to bring The Hills Have Eyes to Blu-ray if the best they could do was use an outdated SD Master (Other films in the studio's "Midnight Madness" line are rumored to have the same problem.), but the image is disappointing to say the least.

The sound quality is a marked improvement over the transfer. The remixed 6.1 DTS-HD Master Audio track won't blow the roof off of your house, but the track gets the job done. Dialogue is clean and audible, and neither hiss nor feedback is an issue. The track is mostly front-loaded, but some of the louder effects occasionally migrate to the rear speakers. I did notice that some of these effects sound a bit harsh, particularly a few screams and gunshots. An uncompressed 2.0 PCM mono track is also included, but subtitles are MIA.

The Blu-ray includes the excellent extra features from the 2003 Special Edition DVD. First up is a commentary with Wes Craven and producer Peter Locke, which is pretty damn great. Craven can talk up a storm, and he is a witty guy. Both men recall the film's production and working with the cast. I particularly enjoyed their comments on the material they had to cut to avoid an X rating. Unfortunately, these scenes are apparently lost forever. Looking Back at The Hills Have Eyes (54:34) is an excellent retrospective documentary with interviews from the cast and crew, and The Directors: The Films of Wes Craven (58:35) spotlights the work of the film's director, with particular focus on his later films. The Restoration Demo (4:13) uses a split-screen approach to show the work that was done on the original negatives. This piece makes the Blu-ray's lackluster transfer more infuriating. Also included are an inferior alternate ending (10:18), several trailers and TV spots (7:18), three still galleries, a text-based Wes Craven biography, and the original script and two screensavers via BD-ROM.

The Hills Have Eyes is a classic horror film from veteran director Wes Craven. Brutal and suspenseful, the film follows an unlucky family who gets stranded in the desert and is hunted by a band of ruthless cannibals. The film remains one of Craven's best, and The Hills Have Eyes is very effective horror. Image Entertainment's Blu-ray is a disappointment, as the transfer is likely sourced from an outdated SD master. The sound quality is decent, and the Blu-ray includes some excellent bonus features. If you do not own The Hills Have Eyes, this release is cheap and worth picking up. If you already own the 2003 Special Edition DVD, the Blu-ray does not offer a substantial technical upgrade. Rent It.