Call Of The Wild, The

MGM Limited Edition Collection // PG // April 18, 2011
List Price: $19.98 [Buy now and save at Amazon]
Review by Stuart Galbraith IV | posted June 20, 2011 | E-mail the Author
Adapted from Jack London's famous 1903 novel, The Call of the Wild (1972) is a real anomaly, downright bizarre even. It improbably brought together A-list Hollywood star Charlton Heston, still near the peak of his fame, with shady Harry Alan Towers, a one-time procurer, bail-jumper, and possible Soviet spy-turned-movie producer, best known for his cheapo Fu Manchu movies and long association with schlockmeisters like director Jesus Franco. Typical of Towers's productions, The Call of the Wild is a multinational patchwork filmed in Norway and Spain, with American, French, German, Austrian, and Spanish actors, whose salaries were shakily financed with money coming from all over Europe. Though the direction is credited to Ken Annakin, a veteran British filmmaker who knew his way around big league pictures, The Call of the Wild is itself only marginally professional, looking not at all like Heston's other movies but typical of Towers's oeuvre. If Heston's deal hadn't included director approval, he might very well have been stuck with Franco!

In the U.S., The Call of the Wild was distributed by a minor outfit called Intercontinental Releasing Corp. Someone there messed up. This and at least one other movie, the Charles Bronson Chino (1973), have slipped into public domain. Just under a dozen labels have offered Call of the Wild on DVD through the years, but MGM's "Limited Edition Collection" DVD-R is by far the best looking, and it's in 16:9 enhanced widescreen. Whether film fans are willing to pay a little extra for this remains to be seen, but MGM deserves a lot of credit for finally officially releasing it. It makes for strange but fascinating viewing. 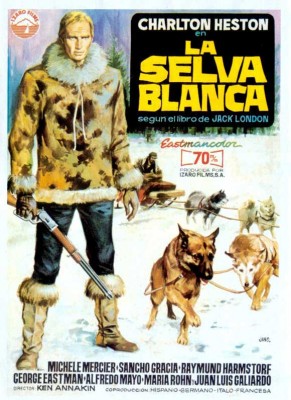 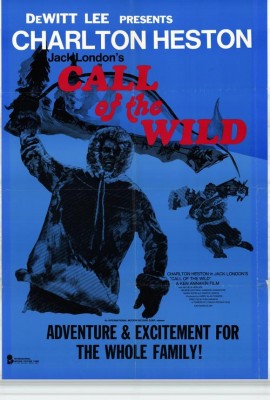 The movie is surprisingly faithful to London's novel, more so than the better known 1935 Clark Gable-Loretta Young feature of the same name. Here, as in the novel, the main character is a Saint Bernard-Shepherd dog, Buck (Buck), and not the part played by Gable and Heston. In flashback, Buck recalls his long violent odyssey: Originally the family pet of a wealthy Santa Clara Valley judge, Buck is stolen by the judge's gardener's assistant and shipped to Alaska during the Gold Rush.

To beef up Heston's screentime his character, an outdoorsman named John Thornton, is introduced earlier in the story. He and his friend, Pete (Raimund Harmstorf), replace the French-Canadians that in the novel first train Buck in the art of dogsledding.

The American poster might claim there's fun for the whole family but the movie, like London's novel, is shockingly harsh and violent. Buck's learning curve is grueling, and the lead dog, Spitz, has a nasty habit of mauling to death his junior sled dogs. There's also Dead Horse Pass, populated by the real thing (provided by a local slaughterhouse, according to Heston). Buck eventually becomes leader of the team, but is stolen a second time in Alaska, where sled dogs are literally worth their weight in gold. He's eventually sold to wealthy greenhorns Charles (Friedhelm Lehmann), Mercedes (Maria Rohm, Towers's wife), and Charles's brother Hal (Horst Heuck). But the trio know nothing about dogsledding, foolishly risking both their lives and the dogs'. Meanwhile, Thornton searches for his missing team while resolving his sort-of love triangle between an ambitious saloon owner (Michèle Mercier of "Angélique" fame) and his beloved Buck.

Most of the picture was shot in Norway (not Finland), apparently with interiors done on stages in Spain. The Norwegian locations are visually spectacular and resemble the Klondike, and much of the dog sledding footage is impressive, though the gold rush villages are decidedly Scandinavian in appearance.

A bigger problem is the international make-up of the cast and that, except for Heston, everyone's voice is dubbed extremely badly. Even most of the dogs' barks and howls are singularly unreal and obviously, sloppily looped. At times it even sounds human, as if someone was going "Ruff-Ruff!" into a microphone on dubbing day. The canine cast is poor, with obviously untrained animal actors inadequately playing Buck and the other dogs.

Ken Annakin may have shot all of Heston's footage, but much the rest of the film is poorly photographed, often employing the kind of shaky hand-held camerawork one associates with Franco rather than Annakin.

In his recommended The Actor's Life - Journals 1956-1976, Heston wrote, "We're faced with the endless problems of organization, personnel, dogs, publicity. ...I fear I've fallen in with amateurs and con men." He later added, "This had not been a picture, really, but a production deal, patched together with incredible adroitness and negotiating skill - and no film-making talent whatsoever." As good a description of Harry Alan Towers as your likely to read.

And yet despite everything the film isn't a total failure. For all his faults Towers and his attraction to violent but (public domain) classical literature and/or historical material (The Bloody Judge, Treasure Island) resulted in a more faithful film than, say, a Disney version would have been. Buck's story is inherently compelling, and Heston's good performance shines through an otherwise shoddy production.

The Call of the Wild is presented in 16:9 enhanced widescreen at 1.78:1, approximating what was probably meant for 1.85:1 projection. The transfer is quite nice and shows the locations off to good advantage. At 104-plus minutes it's complete and the mono audio is fine. Like other MGM Limited Edition titles, this DVD-R format disc is region 1 encoded, but has no other audio or subtitle options and offers no Extra Features.

While no classic, this The Call of the Wild is a beguiling mess of a movie that Charlton Heston fans, as well as those partial to Harry Alan Towers's notorious genre films, may enjoy. It's terrible in some respects but pretty good in other ways and overall Recommended.