Herculoids: The Complete Series, The 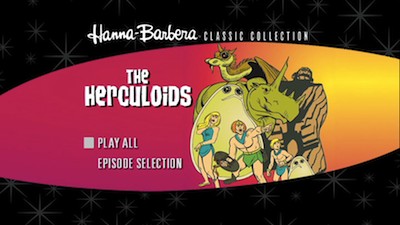 "Somewhere out in space live The Herculoids! Zok the laser-ray dragon! Igoo the giant rock ape! Tundro the tremendous! Gloop and Gleep, the formless fearless wonders! With Zandor their leader, and his wife Tarra and son Dorno, they team up to protect their planet from sinister invaders! All-strong! All-brave! All-heroes! They are The Herculoids!"

I bet you remember that opening voiceover. If you ever saw The Herculoids, it's hard to forget. For some of you, it was from the original 1967 run of the one-season cartoon series. For guys like me, it was from being cut up and dispersed with other 1960s Hanna-Barbera cartoons as a syndicated package. I remember being excited any time one of the Herculoids episodes would appear in the cartoon block. The characters are pretty insane. Two of them are made out of some cosmic gelatin and can form different shapes, multiply, and then come back together. Then there is a rock guy and triceratops that shoots stuff out of its horn and, of course, a flying dragon that shoots lasers.

The series consisted of only 18 episodes, each broken into two individual 10-minute cartoons, all of which are collected here as the two-disc The Herculoids: The Complete Series. When I said that I wanted to take this set for review, I told my editor that it was out of both nostalgia and a morbid curiosity. There is always a danger that what was magical when you were a child is just stupid when you're an adult--and let's be fair, as cool as the Alex Toth-designed characters of this series look, the animation runs into the same Hanna-Barbera cheap-o territory that is a little hard to get past after anime and Pixar changed how we believe cartoons are supposed to look. Saturday morning 2-D animation done on the quick just doesn't fly anymore.

This is a big hurdle for enjoying The Herculoids. It looks terrible, and also terribly inconsistent. Recycled stock shots are pretty obvious, and Toth's model sheets sometimes seem like loose guidelines rather than exact commands. At the same time, once you learn to cope with this, you can actually get into the mindset to still enjoy The Herculoids as an adult. Sure, I couldn't take more than a couple of complete episodes in a row, and there were still some nagging questions about who the hell these people are, exactly what planet they call home, and what kind of society they live in, but you know, I've come to except that these mysteries will never be answered. 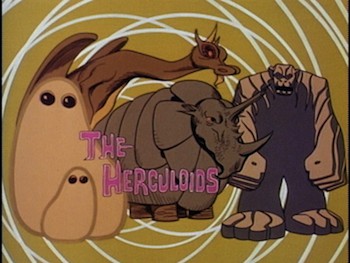 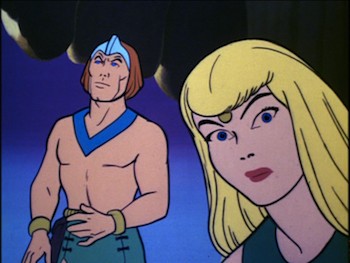 For those who don't have any clue what I am talking about: the short-lived Herculoids cartoon is about a group of...I don't know, inter-species adventurers who live on a planet in some unknown galaxy far away from our own. They consist of three humans, a family lead by Zandor and his wife Terra, and perpetual ransom-material Dorno. Living with them are sentient creatures that communicate in grunts and vocal wiggles, the previously described rock guy, triceratops, etc. Every adventure involves the same basic plot: some bad dude or group of bad dudes, mostly from other planets but sometimes from amongst the weird species that share their home with the Herculoids, wants to take over the planet and/or kidnap the Herculoids. The Hercs fight back, of course, and achieve some hollow victory. The villains go, but will they be back?

There literally is nothing more to this show than that. No hidden socio-political meaning, no complex science-fiction society. Argue all you want, make up your own theories, I don't care--none of it makes sense. Again, that doesn't mean you won't have fun watching the show, but to do so requires surrendering to its illogic and randomness. Why, for instance, do some of the episodes have an incongruous jazzy score to accompany the battle sequences? (Wikipedia says all the music was taken from episodes of Jonny Quest, which is an answer I can accept.) Why do these animals take orders from Zandor, when clearly they are smarter than his son Dorno will ever be? Why does Zandor bounce off of rubber band vines? Yeah, it looks cool, but it's kind of useless. And why do the humans and aliens speak English but the other Herculoids only make guttural sounds, and yet everyone understands one another?!

It's madness, I tell you! But just let go and go with God or whatever. Go with Gloop and Gleep. It's pretty impressive the things those two can do, the shapes they can make. In my head, the series ends when they create a giant self-replicating army and smother Zandor and Dorno in their spaced-out jizm and make Tarra their sex slave. And sure, that may make me sound like a real sick puppy, but after four decades of being reared on this nonsense, what do you expect?

By the way, for those wondering how their own nostalgia buttons might get pushed by seeing The Herculoids again, Warner is offering a free stream of one of the episodes, "The Pirate," for a limited time: 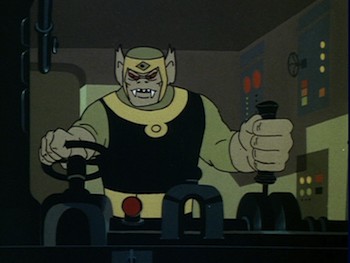 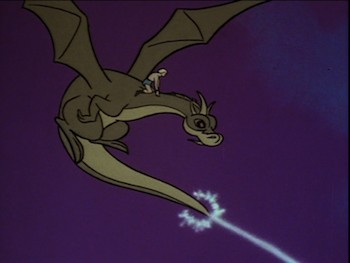 Video:
The Herculoids: The Complete Series is part of the Warner Archives manufacture-on-demand program, which is bringing a lot of the Hanna-Barbera catalogue to DVD in limited quantities. The dual blue-backed discs are packaged in a plastic case with a hinged tray, with a nicely designed cover.

The video image is full-frame, which is how the cartoons were made, and the source quality varies. The resolution is soft, yet the clarity now available watching the shows on a big TV exposes flaws in the animation more than ever before. The boxed image has shimmery outer edges, and there are occasional color flickers and also general fading and damage. Sometimes there is even a low-edge shimmer that suggests maybe these were taken from a video master.

Sound:
The mono soundtrack is pretty good, with only slight distortion and decent levels.

Extras:
The second disc has a quick 4-and-a-half-minute featurette on the program, complete with clips, some great production art, and commentary from animation experts like Paul Dini, Jerry Beck, Mark Evanier, Doug TenNapel, and more.

FINAL THOUGHTS:
Rent It. The Herculoids: The Complete Series collects the 1967 cartoon series on two-discs, and it's an odd duck to try to assess. This whacked-out space-age prehistoric animation show (how many demographics were they hoping to hit?) is a lot of inane fun, no doubt, but The Herculoids is also an artifact from a time when animation was maybe bigger on ideas than the execution allowed for. This series has some super cool characters and each individual ten-minute adventure works well on its own--it's all kinetic energy, there is no nuance or pathos, so how could they not? As a package, though, it may strain the senses. "Credibility" is not a word that exists in Zandor's vocabulary! Good for one run through, but you may have to watch some Tarkovsky sci-fi afterwards just to restore balance to your tilted brain space. 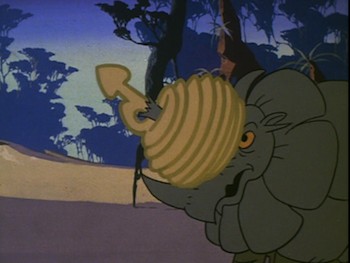 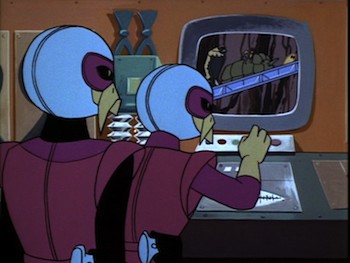