Soldier in the Rain

Warner Archive // Unrated // August 4, 2009 // Region 0
List Price: $26.99 [Buy now and save at Amazon]
Review by Stuart Galbraith IV | posted June 29, 2011 | E-mail the Author
Considering the talent involved - Steve McQueen, Jackie Gleason, Tuesday Weld, William Goldman, Blake Edwards, Henri Mancini, director Ralph Nelson - Soldier in the Rain (1963) is not a fondly remembered army comedy-drama. Hot on the heels of McQueen's star-solidifying role in The Great Escape and Gleason's celebrated role as Minnesota Fats in The Hustler, as well as a juicy part in Nelson's film of Requiem for a Heavyweight, they must have seemed - and still seem - like a pairing with dynamite potential. And, to some extent, they deliver. The movie was not a success but then again it premiered the very week President Kennedy was assassinated, which wasn't the best of timing.

The picture is notable for its schizophrenic tone. Most of the film consists of very broad comedy but then it gets serious and sentimental near the end, something audiences weren't prepared for. The effect is similar to Edwards's Breakfast at Tiffany's which, at least to this reviewer, is a frustrating jumble of good and bad ideas: funny slapstick and perceptive human drama mixed with outrageously dumb stereotypes and sticky sentiment.

Soldier in the Rain was originally released by Allied Artists; the one-time Poverty Row company (then known as Monogram) was in the 1960s trying to improve its image with higher-profile releases. A Warner Archive Collection release on DVD-R format, it's in 16:9 enhanced widescreen but is one of their weaker transfers. The image is on the soft side while appearing digitally tweaked with DNR, or something. The opening titles almost look like black and white videotape and the image overall isn't nearly as sharp as the many outstanding looking if lesser Allied Artists titles Warner Home Video has released in the past. There are no extras. 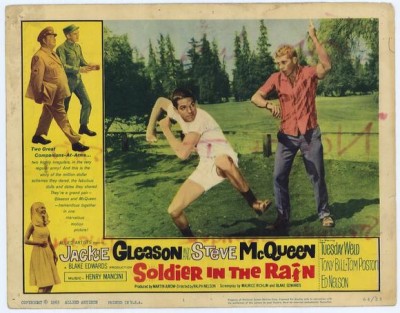 Eustis Clay (McQueen) is a country bumpkin that can't wait to get out of the (peacetime) army. MP Sgt. James Priest (Ed Nelson) and Sgt. Fred Lanaham (Lew Gallo) continually harass him, and commanding officer Lt. Magee (Tom Poston) is a bit of a twit.

However, Eustis is a great admirer of Master Sgt. Maxwell Slaughter (Gleason), a career soldier who uses his quiet but considerable intelligence to scam all the creature comforts a la Sgt. Bilko: his office includes a Pepsi-Cola vending machine and state-of-the-art air conditioning. Slaughter is amused by Eustis's endless lame-brained schemes, like buying up penguins and selling advertising on their bellies. Another example: Eustis wants to rent the Rose Bowl and sell tickets to watch a soldier named Pfc. Jerry Meltzer (Tony Bill), who claims to be able to run a three-minute mile.

Slaughter finds all this mildly amusing and so tolerates Eustis's stupidity, and even bails him out of trouble a couple of times. But Slaughter is resistant when out of kindness Eustis sets him up on a date with imbecilic waif Bobbi Jo Pepperdine (Tuesday Weld), an 18-year-old high school senior.

Soldier in the Rain is an odd film, with much broad and very typical army shenanigans that don't come off, while some of the dramatic stuff near the end almost does. The reasons are Steve McQueen and Jackie Gleason, respectively. McQueen adopts a thick southern accent and mannerisms that aren't at all convincing. It not only runs counter to McQueen's established screen persona, part of which is intense, methodical determination (as opposed to Eustis's half-cocked dumbness) but more to the point McQueen the actor seems to be putting up a barrier between himself and Eustis, as if he holds the poor sap in contempt. The result is the viewer always sees the acting. It's always visible and the accent and the mannerisms come off as actorly at best, completely phony at worst.

Gleason, on the other hand, gives an intriguingly sensitive, low-key performance. He's constantly, silently sizing up Eustis and, later, Bobbi Jo, reading them with his eyes, and in turn the audience is able to read Slaughter reading them. Later, when on a date with Bobbi Jo, he's confronted with his weight problem, middle age, and dead-end army life existence, Slaughter starts looking inward and Gleason does this expertly, too. (Tuesday Weld is also very good here.) Some of this fine acting rubs off on McQueen near the end, and the picture finally comes to life during the last 15 minutes or so. That's not enough to save it, but it's not a total loss, either.

The rest of the film is rather ordinary though Henri Mancini's largely forgotten score is pleasant. In an amusing coincidence, actors Lew Gallo and Tony Bill would each become respected producers, the former on shows like That Girl and The New Mike Hammer, the later for movies including The Sting and Hearts of the West.

Apparently shot for 1.85:1 projection though tight end titles at the very end suggest 1.66:1 or 1.75:1 might also be correct, Soldier in the Rain looks just okay for reasons described in more detail at the top of this review. The black and white image is soft yet also appears overly tweaked with something like DNR. It's watchable but you'll not want to settle in too close to that television monitor. The Dolby Digital mono audio is acceptable. As with other Warner Archive Collection titles chapter stops come every ten minutes. There are no Extra Features.

Steve McQueen gives a lively but disappointing performance in this wildly uneven comedy-drama, but co-star Jackie Gleason's subtle and exceptional acting almost saves it. If you're a fan of either (or, for that matter, Tuesday Weld), then you should probably see this at least once. Flaws and all, it's still mildly recommended.