House By the Cemetery, The

Blue Underground // Unrated // October 24, 2011 // Region 0
List Price: $29.98 [Buy now and save at Amazon]
Review by Stuart Galbraith IV | posted November 7, 2011 | E-mail the Author
Lucio Fulci fans, rejoice! If you like extravagantly gory Italian horror movies masquerading as extravagantly gory American ones, you'll probably love Blue Underground's latest, The House by the Cemetery (Quella villa accanto al cimitero, 1981). Though derivative and confused, the picture is a grand Grand Guignol, with many colorful vignettes along with a couple of impressively audacious ones.

Better still, Blue Underground's excellent "blood-soaked" transfer (their words) is matched by the label's usual assortment of high-quality supplements, in this case most notably new HD interviews with most of the cast and much of the original crew. 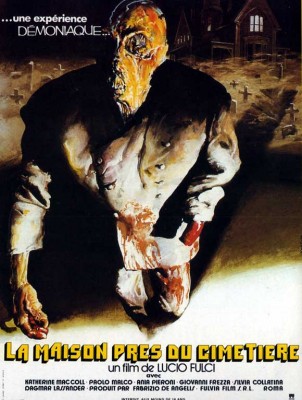 As was common with Italian exports of this type, The House by the Cemetery is set in America, with exteriors shot in and around New York City, Boston, and Concord, Massachusetts, but with all the interiors shot in Rome. The entire cast, mostly Italian, speak English, though most or all of their voices have been dubbed by others.

The picture doesn't pussyfoot around. Within the first 10 seconds audiences are treated to tombstones and naked breasts. A young woman (Daniela Doria), after sex with her boyfriend in an abandoned old house, searches for her beau amidst all the cobwebs, only to discover his mutilated body moments before she herself is horribly murdered by an unseen, shadowy figure.

Months later, Norman and Nancy Boyle (Paolo Malco and Catriona MacColl) are preparing to move from their New York apartment to the same old house, where Norman's professor-colleague apparently murdered his mistress before committing suicide himself. In a clever scene, the Boyle's precocious little boy, Bob (Giovanni Frezza), gazes into an old photograph of the house in which the little girl in the window warns him not to go there. However, by the time Mom enters the room, the little girl has vanished.

However, she reappears in New Whitby, a suburb of Boston (?), and it's clear the little redhead, Mae (Silvia Collatina), is communicating to Bob from the spirit world. Settling in at the dilapidated but cavernous old house, strange things begin to happen. Anne (Ania Pieroni, who resembles British actress Caroline Munro), the Boyle's young baby-sitter/housekeeper, seems to be in league with whatever's haunting the place. However, Bob has a vision of a mannequin being decapitated, and its face a dead-ringer for Anne's. Norman hears strange sounds and his investigations lead him to the basement, which appears to have been boarded and locked-up for decades. Meanwhile, Lucy discovers a bona fide tomb under a hallway rug, though Norman is unconcerned. "It's just something you'll have to get used to," he says. Yeah, right.

As with other films of this type, one of The House by the Cemetery's failings is in not addressing the obvious: once things get scary, you'd think the Boyles would beat a hasty retreat. In one scene, a severely distraught Bob claims to have discovered Anne's decapitated head in the basement, but rather than call the cops Lucy and Bobby head right down into that dark abyss, armed only with flashlights.

The movie is also more than a little confused, though it's pretty clear director Fulci was more interested in delivering as many horrifying scenes as possible, logic be damned. Anne, for instance, clearly is in league with members of the Freudstein family buried (or not) in the adjacent cemetery and underneath the hallway floorboards. She's in there mopping up after a particularly grisly murder, yet is herself gruesomely murdered not long after. The explanation behind all the mysterious goings-on, revealed at the very end, is bizarre and nonsensical, partly even incorporating sci-fi elements, but logic is simply not a priority.

On the other hand, the movie delivers in terms of generating atmosphere and in its gory, graphic murders. My favorite scene is almost tangential, coming when the Boyle family first investigates the basement. A huge bat appears and after first attacking Lucy's hair, with Norman looking strangely unconcerned as she screams in terror, the flying mammal then locks its choppers on the backside of one of Norman's hands. Try as he might, Norman can't pry himself loose as the critter digs his razor-sharp teeth deep into his skin. He finally grabs a pair of scissors and wildly begins stabbing it - Is this such a good idea, with his hand directly underneath? - as blood sprays all over the room, splattering even on hapless Bob.

Mostly, The House by the Cemetery borrows liberally from The Shining (all the stuff with Bob and Mae) and The Amityville Horror (almost everything else), but Fulci's direction is reasonably stylish. It's hardly at the level of Mario Bava or Dario Argento (at his best) but it's also far superior to the vast majority of graphically violent American slasher films simultaneously being made on the cheap and which, like The House by the Cemetery, made the controversial "Video Nasty" list of 72 features censored or banned outright in Britain. Though this was produced at about the same budget level as most of those films, there's clearly an effort to get the most out of every scene.

For instance, there's a good use of sound effects throughout, with creepy creaks and other sounds emanating from various parts of the house. The English dubbing hurts, however, especially the looping of the little boy, Bob. (The Italian version is better in this regard.) The young actor playing him is also miscast. Instead of being identifiably ordinary (like the little boy in The Shining), the young actor playing him has instead an unsettling appearance - he's anything but a "Bob." With his straight blonde hair, piercing blue eyes, and ultra-full red lips (eat your heart out, Barbara Hershey) he's like one of the kids from Village of the Damned. However, the girl playing Mae is exactly right: a normal looking redheaded girl whose features express an unstated sadness and otherworldliness.

Filmed in two-perf Techniscope, The House by the Cemetery is yet another stunner from Blue Underground, with the image, reportedly drawn from the original "uncut and uncensored" camera negative, looking absolutely pristine. Color is dead-on and the image is notably sharp, exhibiting just the right amount of film grain. The English DTS-HD 2.0 audio is fine, as is the optional Italian mono track. Yellow English subtitles are kept within the frame line and, like Universal's SDH subtitles, are positioned in such a way that you can always keep track of who's talking at any particular moment. However, those wanting to watch the film in Italian must also contend with subtitles noting sound effects as well "[door closes]." French and Spanish subtitles are also included, and the disc is region-free.

Supplements include a ton of new HD interviews. There's so much material one can't help but wonder if the material might have been better served boiled down into a single featurette running perhaps 30 minutes. However, several interviews go off in directions unrelated to the feature, so maybe this approach is best. MacColl and Malco appear in "Meet the Boyles," while one-time child actors Frezza and Collatina are the subject of "Children of the Night." Dagmar Lassander and Carlo De Mejo have small parts, but their segments "Tales of Laura Gittleson" and "My Time with Terror" are interesting. Lassander talks about working with Mario Bava, for instance, while De Mejo, the son of Alida Valli, discusses appearing in Pasolini's Teorema. Screenwriters Elisa Briganti and Dardano Sacchetti are interviewed for "A Haunted House Story," while cinematographer Sergio Salvati, make-up effects man Maurizio Trani, special effects artist Gino De Rossi, and actor Giovanni De Nava discuss how "To Build a Better Death Trap."

Also included is a deleted scene (in standard-def), both an international and American trailer in HD, as well as a TV spot (that and the American trailer are narrated by Brother Theodore!), and a poster and still gallery, surprisingly in standard def as well.

Obviously, this is not a movie for everyone, but fans of this genre should be very pleased. The transfer is excellent and the extra features seem to go on forever. The movie, while highly derivative and illogical, is nonetheless gruesomely entertaining and the whole package therefore comes Highly Recommended.