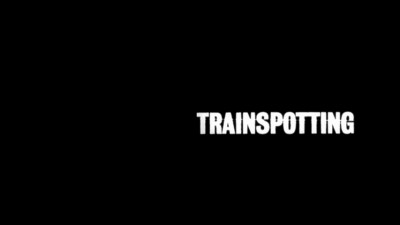 Trainspotting begins with a truly unforgettable sequence of two young men running down a street while trying to avoid the pursuit of security guards chasing after them. The pair had stolen some merchandise to try and pay for their drug habit. What was the drug they were running towards (metaphorically)? Heroin. Their names are Renton (Ewan McGregor) and Spud (Ewen Bremner). Iggy Pop's classic rock anthem "Lust for Life" blasts over the on-screen sequence.  Narration by Renton provides interesting insight into the character at the beginning of the film. The way Renton sees it: why should he choose to live his life when he can instead do drugs?

The film focuses on a group of drug-users - heroin addicts - who are dissatisfied with their surroundings and unsure of what to do with their lives. To some the drugs seem to represent meaning for their lives, and to others it seems to represent an attempt to escape from meaning. The film follows the escapades of these confused and misguided young men as they struggle with their drug addiction. Eventually, some of the characters decide to try and quit their destructive lifestyles and actually live. But before they can get to that point they face overdose, strange encounters, delusions, and a crazy plan that involves selling heroin for a huge profit. Along the crazy mind-trip that is Trainspotting these characters must learn how to face their realities if they can. 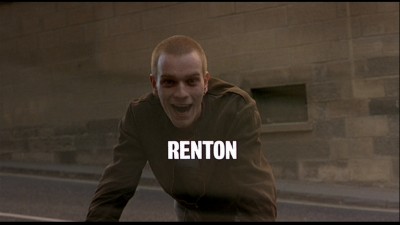 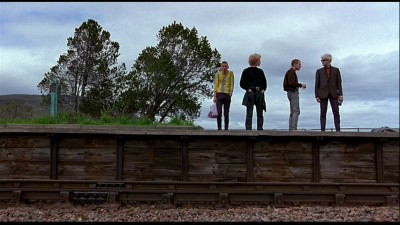 Trainspotting is the best film made by Danny Boyle. Boyle is an undeniably gifted film-making artist who constantly manages to amaze through his remarkable ability to turn out one great film after another. He is always innovative in his film-making techniques and he is an unafraid artist who is willing to tell stories that other film-makers would often shy away from telling. Boyle has a great artists eye and he is always capable of coming up with interesting ways to tell his stories story visually. Trainspotting has a lightning quick pace at times but it still remembers to slow down when it needs to. The framing is always amazing and there are many moments that can remind viewers of paintings in their specific visual complexity.

The screenplay by John Hodge is a remarkable one that brilliantly adapts the novel by Irvine Welsh. Hodge wisely remembers that film is a completely different medium and that not every element of Irvine Welsh's novel could be carried over into the cinematic world. Instead, the adaptation captures essential elements and delves into focusing in on certain characters and thus wisely makes Renton (Ewan McGregor) the lead protagonist.

The performances help to carry the film's heavy dramatic weights. Ewan McGregor delivers one of his very finest performances. Jonny Lee Miller (Sick Boy), Ewen Bremner (Spud), Robert Carlyle (Begbie), and Kelly Macdonald (Diane) also contribute memorable performances in roles that are impossible to ignore. Trainspotting manages to be an ensemble work unlike most others and the casting decisions made a large impact on the effectiveness of the film. 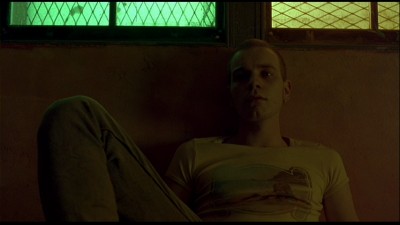 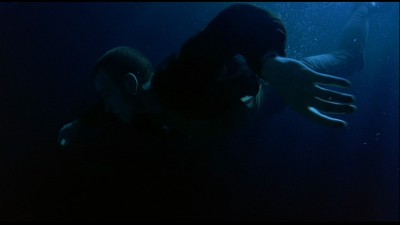 One element of the film that stands out as entirely unforgettable is the eclectic mix of music used as the soundtrack to the story. There is an incredible selection of rock, techno, pop, and classical music used in creative ways to emphasis different element of the actual story and to bring more emotion and meaning to many sequences. With songs by artists like Iggy Pop, Brian Eno, Primal Scream, New Order, Blur, Lou Reed, Underworld, and Damon Albarn (contributing new music) it's hard to go wrong musically. In both the way the music is used in the film and as a standalone selection of songs, Trainspotting turned out to have one of the finest film soundtracks of the 1990's.

There is one truly great misconception about Trainspotting that always manages to amaze me:  the fact that some have considered the film a glorification of drugs. This couldn't be farther from the truth. The film presents drugs as bringing some kind of euphoric high for these drug addicts, true, but then it goes on to display just how much it damages every other element of the characters lives. It's hard to imagine anyone watching the film and thinking after the experience, "I hope to use drugs now. Drugs look fun!" Rather, Trainspotting presents a sense of realism through its surreal filmmaking approach and should actually inspire many viewers to reconsider ever using drugs.

This is a film about drug addicts. That is the surface level of the story. It does run much deeper than that (as it truly tries to examine the effects of the drug addiction on the characters), but that isn't really what the point of the film is at all. Its message is one of the worth of the characters - most especially Renton, but of each of the other characters in this story as well. These characters aren't terrible people: far from it. These characters made dramatic and life-altering mistakes by using Heroin, becoming addicts, and for allowing themselves to go down a path of despair and destruction by continuing to make wrong choices. Yet there is still hope in the future - there can be hope. Everyone makes mistakes - some make mistakes significantly larger than others, but everyone is capable of looking towards a better and brighter future if mistakes are learned from. Trainspotting surprises expectations by being a daring film about how the worth of the characters lives (who are heroin addicts) is of the upmost importance and how the wrong decisions can be destructive to their lives but not remove their ability or capacity to change. In the end, at least one of these characters decides to move beyond past mistakes and to focus on living life to its fullest. Without the drugs. Without the pain and despair. With hope and courage. Choose life, indeed. 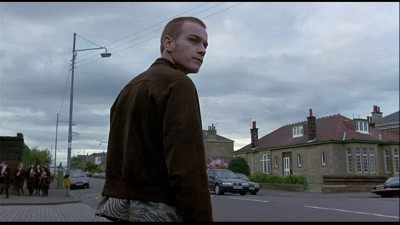 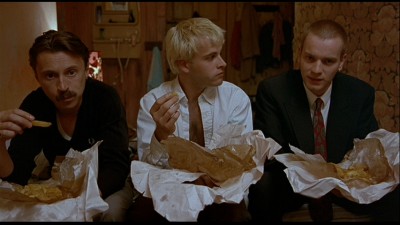 Trainspotting arrives on Blu-ray in 1080p High Definition. The transfer preserves the original theatrical aspect ratio of 1.85:1. The print used for this new Blu-ray release seems to be the same source used for the previous Collector's Edition DVD. The image is clean for the most part (though some specks of dirt do occasionally show up). Colors are notably improved and contrast is impressive. The image isn't the sharpest image available in High Definition but it is significantly sharper and better defined that any previous editions (including the Canadian Alliance Blu-ray release) of this film. There is also a greater sense of depth to the image and that is certainly appreciable. Owners of the DVD will want to consider upgrading and anyone who has yet to purchase the film shouldn't have to worry about the presentation quality. It's a thoroughly nice release.

The images featured in this review are from the DVD release and do not represent the High Definition Blu-ray picture quality.

The film is presented with an impressive DTS-HD Master Audio 5.1 surround sound track that matches the stellar video presentation. The dialogue is easy to hear (and I would say understand but some people have a problem with the thick accents). Not to worry: while the film is presented in English (as it should be) the dubbed version that toned down the accents and that was made available at one point is not included on this release. Optional subtitles are provided in English, Spanish, and in English for the deaf and hearing impaired. The best thing about hearing the lossless audio may very well be the phenomenal music. It does sound better than ever.

This Blu-ray release is packed to the brim with excellent supplemental materials and all of the amazing supplements featured on the Collector's Edition DVD are ported over. Nothing new has been added (besides a Digital Copy). Each bonus feature is presented in Standard Definition (SD).

The first supplement is an audio commentary by Danny Boyle, Andrew MacDonald, John Hodge, and Ewan McGregor. It would make an excellent listening experience for fans of the film.

A Trainspotting Retrospective is broken down into several informative key sections (unfortunately, there is no 'play all' option).

These segments give some thoughtful insight into the visual qualities of the film through use of some interesting interviews. These features do seem a bit short but are worth a watch.

These features cover the sound design and music used in the film. The best part was getting to hear Danny Boyle explain about the sound-mixing process and the significance of finding the right songs to use in each scene (when the opening of the film is shown briefly with a much more solemn sounding piece the entire mood is changed). This extra is definitely for those curious about the music aspect of Trainspotting.

Each interview provides a great deal of insight into the film. Irvine Welsh (the author of the novel) discusses how the transition was made to cinema and shares some thoughts about the adaptation. John Hodge, the screenwriter, discusses his process and how he found it to be a significantly more manageable process than writing his own original screenplay (which he did for Danny Boyle's Shallow Grave). It was fascinating to hear him share his thoughts on how he approached adapting the novel (but perhaps the coolest part was finding out that he was a doctor before becoming a screenwriter - something that he always wanted to be).  Danny Boyle gives the most detailed and thorough interview (it was also the longest of the interviews). Boyle talks about how he first read the novel and how much he wanted to turn it into a film and why. He describes his approach to the story. Any fan of Danny Boyle as a director will find this an educational and entertaining interview. Lastly, Andrew MacDonald gives an insightful look at the production standpoint of creating the film and the challenges found in telling a story like Trainspotting and making it stand out for audiences.

This extra demonstrates three different viewpoints of a scene being filmed: Director Danny Boyle watching the scene being filmed on a screen, the actual footage, and a split-screen comparison between the first two angles.

Carlton Athletic Boys (:32) - A short featurette about the sports team from the beginning of the film.

The Making of Trainspotting (9:32) - This feature isn't comprehensive as a making of as it consists of more interviews discussing the film and characters than the work process. This standard piece does contain some interesting interviews though and it does a good enough job of emphasizing some of the strengths of the film.

These interviews are obviously quite short. Each interview was taken from the Cannes Film Festival premiere of Trainspotting. Having said that -- these are entertaining interviews and they are each worth watching to hear the brief thoughts that relate to the film on one level or another.

Gallery (5:06) - This is a video collection of snapshots that were taken during the filming of Trainspotting.

Lastly, trailers are included for other Lionsgate Blu-ray releases and a bookmarks feature allows viewers to create their own bookmarks. 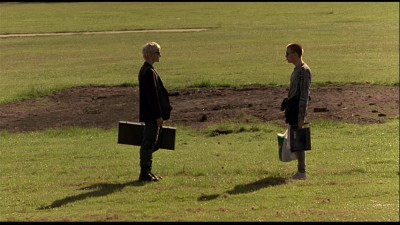 Trainspotting is one of the best and most important films made during the 1990's. It was electrifying for audiences worldwide, it helped to change some of the scope of possibilities found in British cinema, and it told an incredible story in a way that few expected. Director Danny Boyle suddenly became well known and nothing has been quite the same ever since. Ewan McGregor was phenomenal as the lead character Renton. This one is a real classic to appreciate in all of its many unique wonders.  Highly Recommended.