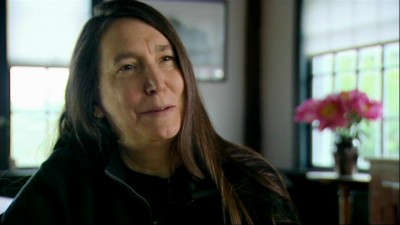 I have always been fairly ignorant about any sort of art-world who's-who there might be, so Claudia Müller's documentary About Jenny Holzer was my introduction to a fascinating artist who, along with the more celebrated photographer Cindy Sherman and collage-maker Barbara Kruger (who are famous enough that even I have heard of them) was part of a wave of American female/feminist (whichever you prefer) artists who took over the gallery-and-museum scene in the late 1970s and early 1980s. "Holzer's medium," the DVD copy informs us, "is language," and that is essentially true; but what she actually does is hone her written texts to have the sound and feel of clichés, maxims, soundbytes, or slogans, and then runs them in public spaces that usually contain information or advertising in order to take her audience by surprise. (Would you be able not to do a double take if you were wandering along the sidewalk and caught, out of the corner of your eye, a movie theatre marquee whose magnetic letters spelled out, "Sex differences are here to stay"?) Müller's film is part introduction to/discussion of Holzer's very intriguing work, part biographical sketch of the woman herself, and I am happy to report that it can be enjoyed by virtually anyone; it has the enthusiastic, informational, but never condescending tone of a primer made for the curious but as-yet uninitiated. 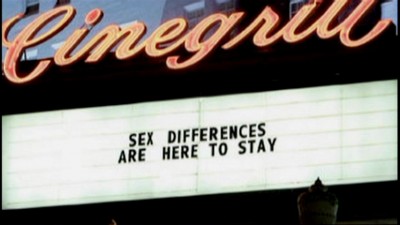 Holzer first came onto the New York scene, at a time when New York was the only place for a seriously aspiring artist to start out, in the mid-'70s after graduating from The Rhode Island School of Design (also, in an interesting coincidence, the alma mater of Gus van Sant). Out of frustration with her lack of progress in painting, she began to to incorporate her texts into homemade posters and, inspired by graffito-creating colleagues like Keith Haring, put them up around the city at random. As her work with language developed, she began to incorporate her texts with technology, "repurposing" the omnipresent media that surrounds us in public spaces. Her first big splash was a Times Square LED sign that ran and then flashed, in gigantic, electric letters, alternating phrases like "Protect Me from What I Want," "Torture is Barbaric," "Private Property Created Crime," and "Abuse of Power Comes As No Surprise"--statements meant sometimes sincerely, sometimes ironically, but always designed to provoke thought. Müller includes copious footage of Holzer's work, which evolves from these stark, quasi-anonymous signs in the mid to late 1980s to a "Survival Series" of pieces addressing AIDS ("In A Dream You Saw A Way To Survive And You Were Filled With Joy") to installations about the atrocities committed against women in Bosnia and a silkscreen series pinpointing the U.S. government's post-9/11 secrecy and complicity in torture. A basic rundown on what Holzer is up to intellectually and aesthetically is provided by voice-over narration, and a handful of interviews with colleagues and art experts enumerates the various reasons that Holzer's work is considered important and innovative. 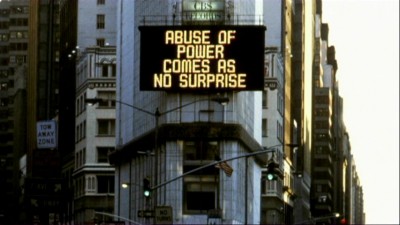 Holzer the individual--seen in some archival footage (some shot by future Todd Haynes/Howl cinematographer Ed Lachman) but mostly in present-day talking-head interview with Müller and life-at-home footage shot by Müller's team--is more down-to-earth than one might assume from her work, a personality that comes from what she describes as her plain-spoken, no-nonsense Midwestern roots. But make no mistake, Holzer is as whip-smart and sophisticated as they come. Despite there being always a hint of self-deprecating humor to what she says, she considers her words carefully and is extremely serious about her work. She looks something like Patti Smith and speaks in a way reminiscent of Susan Sontag, so she cannot help being a bit intimidating, and it seems almost incongruous that she loves horses and cats and is a devoted wife and mother. But her discussion of her history, her inspiration, her process, and her goals is beautifully straightforward and unpretentious. So often artists either do not have the skill with words to express themselves as well as they do in their work, or their words seem purposely obfuscating; but Holzer, like her work, is as up-front and understandable as she is sharp and intelligent. 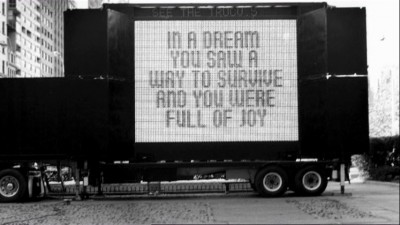 Müller, along with her videographers, Christoph Lerch and Helen Tschudi, and her editor, Peter Boris Hassmann, conveys Holzer's work with smart camera setups and lighting (video, with its modern starkness, is actually a very apt way in which to capture Holzer's aesthetic), while the interview and documentary portions with Holzer are simple and unobtrusive, the better to get to know this calmly compelling figure. Müller is not doing anything cinematically revolutionary here, but she expertly uses the medium as a tool for bringing Holzer and her art closer to viewers, and that in itself can be considered revolutionary enough for anyone who has not yet had the opportunity.


Lerch and Tschudi's videography comes through clearly enough throughout, though there is some slight blur, particularly noticeable with any camera movement, that suggests they were not using (or not maximizing) the most advanced equipment somewhere along the way in the processes of shooting, processing, or transferring the program onto DVD. Some of the older footage shows its age and/or the relative technological crudeness of its time, but that is certainly understandable and not a distraction in any way. The main visual defect I noticed was some blurring and instability in the very basic video, white-on-black credits, which are still entirely readable despite the flaw. This appears to affect the credits only, so it does not significantly detract from the overall experience.


Since About Jenny Holzer is a documentary with strictly dialogue and music on the soundtrack--no overwhelming sounds or sound effects were required, obviously--the disc's Dolby digital 2.0 soundtrack is more than adequate to give the narrator's and every interviewee's voice a crystal clear presence.


All we get in the way of extras are two "short films" also by Müller, Neue Nationalgalerie Berlin and Xenon Projections, both of which are not much more than material documenting Holzer's work that we've already seen in the main feature, edited together to match up with some nondescript music. These shorts are neither bad nor necessary; having watched the feature before delving into them, however, they left me fairly indifferent, as they only repeat what we are given more in-depth, and with much more context, by the long-form documentary.


About Jenny Holzer is "educational" in the sense that its aim is to expose us to something we likely have not experienced before, but it is the kind of enthusiastically taught, engrossing lesson you can look forward to learning. The subject (Holzer and her work) is provocative and incredibly interesting, and director Claudia Müller adopts a straightforward, unobtrusive, gently explanatory approach that easily and enjoyably allows us into the experience of Holzer, her personality, her life, and her fiercely intelligent creativity. Highly Recommended.