Sony Screen Classics by Request // Unrated // March 23, 2011 // Region 0
List Price: $20.95 [Buy now and save at Amazon]
Review by Stuart Galbraith IV | posted July 11, 2011 | E-mail the Author
It all started in 1940 when producer Hal Roach, best known for his short comedies with Harold Lloyd, Our Gang, and Laurel & Hardy, in wanting to expand into the feature film market produced One Million B.C. (1940). A cavemen vs. dinosaurs epic, it featured remarkably good special effects with lizards, alligators, and other critters masquerading as prehistoric beasts. It was the film of its kind until Roach sold the remake rights to Britain's Hammer Films, which improved upon the material by adding stop-motion dinosaurs by Ray Harryhausen and a doeskin bikini-clad Raquel Welch in an iconic, star-making turn. The 1966 One Million Years B.C. was the biggest hit in Hammer's history and a sensation all over the world.

The company immediately cashed in its success, quickly and cheaply producing Slave Girls (U.S. title: Prehistoric Women, 1967) while One Million Years B.C. was still in post-production. It was a dinosaur-less follow-up that paled by comparison in every way save Martine Beswick's Queen Kari, the sadistic, cruel leader of the Amazon tribe. (Seen alone it's deadly dull though with a big, receptive audience it can be a laff-riot.) Hammer tried again with When Dinosaurs Ruled the Earth (1970). That one had more great stop-motion dinosaurs, this time by Jim Danforth and Dave Allen, but the human story was again lacking.

Hammer's last stab at the caveman genre was Creatures the World Forgot (1971), the fourth and least entertaining of the bunch. As with Slave Girls it's bereft of dinosaurs and the characters are exceedingly dull and uninteresting, though the picture is slightly better than When Dinosaurs Ruled the Earth in other respects.

Part of Sony's "Columbia Classics" line of DVD-Rs, Creatures the World Forgot looks fantastic, and at 95:20 appears to be the uncut, A-rated British version of the film, though it's not entirely clear if it was cut at all for its GP-rated American run. The film is presented in 16:9 enhanced widescreen, and comes with a similarly enhanced widescreen trailer. 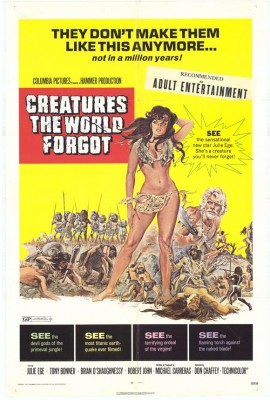 The picture is only a slight variation of One Million Years B.C.'s plot, which itself closely followed Roach's 1940 film. After some early scenes where members of a primitive tribe jockey for power and survive a double eruption of twin volcanoes (mostly stock footage from One Million Years B.C.), Mak (Brian O'Shaughnessy) assumes leadership of the mostly dark-haired, fur-wearing men, women, and children.

They initially clash with the Fair Tribe - in movies like these fair-haired cave people are always more peaceful and socially advanced than dark-haired cave people; they're also cleaner, incidentally. However, the tribe's many friendly children touch Mak, and eventually he accepts their peace offering, a Fair Tribe woman named Noo (Sue Wilson). She dies during childbirth, and a providential lightning strike simultaneously sends another cave girl into labor. At the urging of the tribe's mystical ole crone (Rosalie Crutchley), Mak accepts both newborn boys (clearly unconvincing dolls in some shots) as his own.

However, while Toomak (Tony Bonner) grows into a paragon of cavemanship, brother Rool (Robert John) is a backbiting little snot. (They're seen briefly as prepubescent boys that look like Harpo Marx and Mickey Dolenz, respectively.) Along the way Toomak takes Nala (Julie Ege), the daughter of a chief killed in battle, as his own. (Ege doesn't appear until the 56-minute mark, surprisingly late considering Hammer was fashioning her as the next Raquel Welch.)

On the plus side, Creatures the World Forgot reunited director Don Chaffey with composer Mario Nascimbene. They contributed as much to One Million Years B.C. as Ray Harryhausen's stop-motion dinosaurs, giving the underrated film an otherworldly and genuinely prehistoric feel. Sadly, Creatures the World Forgot doesn't generate 1/10th as much compelling atmosphere, though there are wisps of it here and there. However, what interest is generated pretty much evaporates after the first act, and toward the end chances are good you'll be pleading for it to finish.

Part of the problem is that the picture just doesn't have much of a story to tell and no characters to tell it with. Ege, Bonner, and John are all complete blanks, despite their robust physical condition. Only Crutchley's crotchety witch doctress makes any impression, this despite her fairly ludicrous gray wig and bushy eyebrows.

One subtle but significant difference between One Million Years B.C. and Creatures the World Forgot is that in the former a rudimentary language is used by the cave people, and its vocabulary is easy for the audience to pick up. Indeed, it's the same language first developed for Roach's 1940 original. In Creatures the World Forgot the characters merely grunt among themselves like football players and only occasionally use gestures, so that despite the large number of people in the various tribes there's very little communication. This in turn discourages audience interest. It may be the only narrative feature film from an English-speaking country and the sound era not to have a single word of dialogue and no narration.

One Million Years B.C. was filmed on the Canary Islands while this was shot mainly in what's now Namibia, in Western Africa. The scenery is attractive and visually interesting, though it lacks the unforgiving harsh edge of the earlier film. It's notably graphic, opening with the killing, disemboweling and skinning of a real antelope (an Oryx?). It's also slightly more explicit in the sex department, as many of the women are semi-topless throughout. Their breasts are often but not always fully exposed, while at other times they're obscured by the shells and other accessories dangling from their necks.

Creatures the World Forgot looks quite nice. The 1.78:1 enhanced widescreen image has strong color and is impressively sharp, as is its only moderately grainier enhanced widescreen trailer. The region-free DVD-R disc's mono audio (English only, with no subtitle options) is likewise fine.

Supplements are limited to a trailer, but it's a pretty good one, selling the picture assets, few in number though they are.

Hopefully, the release of Creatures the World Forgot is a sign Sony may yet release its remaining Hammer titles as "Columbia Classics" further down the line. About 75% of the company's 1955-1975 output is out on DVD in some form, and most of what remains are Columbia titles: Visa to Canton, The Scarlet Blade, The Secret of Blood Island, The Brigand of Kandahar, etc. And they're probably all better than Creatures the World Forgot. A must for Hammer completists, but others will want to Rent It.