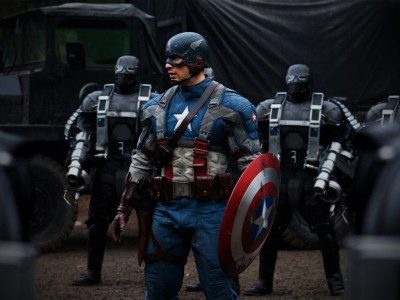 This, friends, is what I'm talking about. Captain America: The First Avenger is a work of pure pop bubblegum pleasure--a rousing, thrilling, and thoroughly satisfying summer blockbuster that puts most of its multiplex-mates to shame. The filmmakers responsible--director Joe Johnston, screenwriters Christopher Markus and Stephen McFeely, producers Kevin Feige and Amir Madani--understand that "popcorn movie" doesn't have to be a term synonymous with brain damage; they get that they can offer up a good time without openly insulting a moviegoer's intelligence. The result is an absolute treat.

The picture takes a little while to get going; the opening scenes amount to a bit too much throat-clearing, but soon enough we're introduced to Steve Rogers (Chris Evans), a "90-pound asthmatic" from Brooklyn, circa 1942. Steve wants nothing worse than to enlist in the army and do his patriotic duty, but his bony shape (this early, tiny version of buff Evans is eerily convincing) and numerous maladies make him too small and sick to serve. However, his multiple attempts to enlist catch the attention of Dr. Abraham Erskine (Stanley Tucci), who thinks he might be just right for an experimental program to create a scientifically-engineered "super soldier."

This technology is of keen interest to HYDRA, a rogue scientific arm of the Nazis; their leader, Johann Schmidt (Hugo Weaving) underwent a similar process, with less aesthetically pleasing results. After Steve undergoes the process, the project is cut short; he ends up becoming a mascot for the war effort, until he has the opportunity to take a chance and show what he's capable of.

So you've got your Nazis and spies and chases and shoot-outs and all kinds of good stuff, all delivered by director Johnston (The Rocketeer) with exactly the right mixture of tongue-in-cheek humor and gee-whiz enthusiasm. There's a wonderful throwback quality to the picture, both in terms of that sly tone and the lovely, nostalgic, Art Deco-flavored cinematography and production design (the former provided by Shelly Johnson, the latter by Rick Heinrichs). Johnston isn't just evoking Raiders of the Lost Ark, but the pictures that informed that one; when Captain America goes on his PR tour, the filmmaker has a ball employing every vintage filmmaking device in the book (big titles, zazzy transitions, little song, little dance) to create a good, old-fashioned goofy montage.

But--and this is key--Johnson isn't so enamored of his quotations and homages to forget the importance of crafting an emotional subtext of at least some resonance. There is a wonderful two-scene, on the eve of the experiment, between Steve and Dr. Erskine, where the simplicity of the dialogue (asked to explain why he wants to fight the Nazis, Steve replies, "I don't like bullies") is simultaneously undercut and accentuated by the unabashed sentimentality of Alan Silvestri's score. (This is a composer I've seldom admired, and I'm not sure whether he's always in on the joke, but whatever the case may be, this music plays.) The picture is littered with dashes of welcome humor (when a visiting Senator gets a look at the emaciated Steve, he barks, "Jeez, somebody get that kid a sandwich"); the filmmakers indulge our love of fisticuffs and explosions, but are also keenly aware of the pleasures of an actor's reaction, or of a particularly good line.

Many of those are given to Tommy Lee Jones, who is effortlessly gruff and funny as the skeptical colonel in charge; he's got a way of giving crisp dialogue an exquisitely sour twist (not many actors could do quite what he does with "You and I are gonna have a conversation later that you will not enjoy"). Stanley Tucci is equally well-cast as the slightly dotty scientist; as "the girl," Haley Atwell smolders good and sports a great accent, and her relationship with Evans has a sweetness with a bit of a kick. In the title role, Evans does the steel-jawed yet good-natured hero thing as well as anyone since Christopher Reeve, and his total commitment even makes the corn of his emotional climax into something genuine. This was not an actor with a promise of greatness in his early roles, yet I can imagine no one else in this one.

Captain America: The First Avenger is not a film that fulfills any tremendous need; it is one more comic book film in a summer overstuffed with them, and one more tentpole movie in a season that offers a new one every week (at least). But it stands above those other films, not because its aspirations are loftier--it wants little more than to entertain--but because it does its job with skill and wit and more than a little bit of style. For that, it deserves all of the kudos we can muster. This is the best pure popcorn movie in quite some time.

Side note: The media screening I attended was in 3-D, so I had no choice in the matter; with the exception of a brief underwater scene, the effect adds nothing (as usual), and even hurts a couple of scenes, in which Steve's fast speed somehow seems extra choppy and unconvincing. Save the surcharge and see it in 2-D.