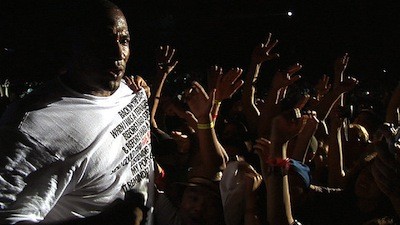 For music fans of a certain age, no other introduction is necessary, and Michael Rapaport's new documentary Beats, Rhymes & Life: The Travels of a Tribe Called Quest smartly sticks that right up front. Want to remember what it was like to nod your head to the Tribe? Here you go.

Though, Beats, Rhymes & Life: The Travels of a Tribe Called Quest is more than a trip down memory lane. It's a compelling story about a specific time in popular music, the personalities that came together to create it, and the personal implosion that led to the group disbanding in 1998, a mere decade and five albums into their successful career. Rapaport uses the occasion of a 2008 reunion tour to explore the history and its meaning. Through new interviews, concert footage, and plenty of clips from back in the day, Rapaport backtracks to the Queens neighborhood where the four kids came together and found a new path, embracing rap and hiphop and revolutionizing the image of the art form in the early 1990s. Their story is the story of a movement, dubbed the Native Tongues, that included bands like De La Soul and Jungle Brothers and informed a generation redefining their consciousness. Marshalling a musical force that grew from the streets of New York, they were at the forefront when hiphop went worldwide. Many of the players sit down to share their memories of Quest, including the Beastie Boys, Monie Love, and many of their other cohorts; younger artists like Common, Black Thought and ?uestlove from the Roots, and Pharrell Williams, who were influenced by the Tribe, also chime in.

Beats, Rhymes & Life perfectly captures the highs and lows of creative collaboration, stardom, and the realization of a dream. The early days are palpably exciting. The members of the Tribe saw rap as one big party, one that they were more than willing to join. Once they started making their own tunes, the stars aligned and all the pieces fit together. Their first three albums are seminal hiphop releases: People's Instinctive Travels and the Paths of Rhythm, The Low End Theory, and Midnight Marauders. Rapaport gives each their due, exploring how the different personalities came into their own, sparked off each other, and then got too hot to handle. Marauders was released in 1993, and Jarobi was already gone from the group. It was the last time the remaining trio would be in sync. 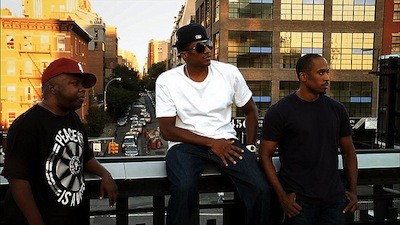 The back half of Beats, Rhymes & Life resembles a funky redo of Metallica's Some Kind of Monster. How does a hugely successful musical act get through creative differences and an inability to communicate? In this case, they didn't. Phife Dog and Q-Tip were a dynamic dup on record and in concert, but personal clashes off stage, as well as Phife's struggles with diabetes, were taking its toll. At one point, Phife's wife suggests they should get a therapist to sort out their differences, and Phife laughs it off. He doesn't need to pay someone to tell him what he already knows. That pretty much says it all right there.

What the camera captures is incredibly raw. Phife still bristles when it comes to Q-Tip's dissolution of the Tribe and feeling edged out, whereas Q-Tip seems baffled by the animosity. In the middle is Ali, who saw that the group had run its course and moved on to other endeavors. The 2008 reunion was undertaken ostensibly to pay for Phife's medical bills, and though a success in that sense and even with the calming presence of Jarobi along for the ride, it descended into animosity and bickering yet again. It seemed that would be the end of the story.

Except not is all as it seems. Beats, Rhymes & Life: The Travels of a Tribe Called Quest has a redemptive coda. A surprise discovery gives Phife another chance at being healthy, and the band was in fine form for more shows in 2010. You can see the difference right away. Phife physically looks better, for one, but the general rapport between all the members seems to have been reinvigorated. Whether or not this will last is not the point. As the band itself says, they are a family now, a real tribe, and something will always call them back together. They can do whatever they want separately, but nothing will equal the magic that happens when they work as a unit.

And for folks who don't know that magic firsthand, or who have forgotten, letting their albums and CDs grow dusty, Beats, Rhymes & Life: The Travels of a Tribe Called Quest will remind you of how good this group really was. Rapaport is generous with the tunes, though he particularly hammers on the deep bass of "Buggin' Out" and the unmistakable drums of "Can I Kick It." Just try to drop either ear worm out of your head after leaving the theatre. If there is any justice, this movie will serve to get new generations scrambling to get on iTunes and download the Tribe catalogue. Start at the beginning with Instinctive Travels and work forward. The movie shows you how much soul these four individuals put into their recording, the least you can do is listen! 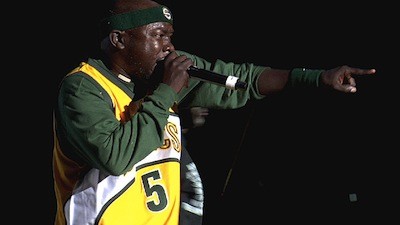