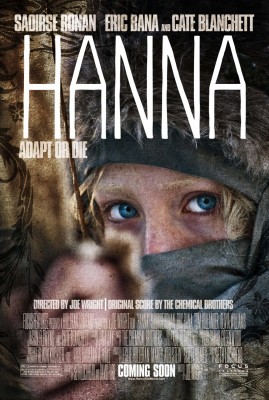 "Sometimes, children are bad people, too," says rogue CIA agent Marissa Wiegler. The child she refers to is Hanna, a sixteen-year-old girl raised in the wilderness and trained by her father to be an assassin. Hanna has a score to settle with Marissa, who may be the only other adult aware of Hanna's deadly skills. Director Joe Wright's grim fairy tale Hanna is a Whirling Dervish of action, suspense and whimsy anchored by the extremely talented Saoirse Ronan. Hanna is, without a doubt, one of the year's finest films.

The film opens with a scene of Hanna (Ronan) stalking a deer that she eventually shoots with a bow and arrow. "I just missed your heart," Hanna declares before finishing the job with a revolver. This slightly surreal opening sets the tone for the rest of the film, which pulls few punches. Hanna lives in the wilds of Finland with her dad, Erik (Eric Bana), an ex-CIA operative on Marissa's (Cate Blanchett) hit list, who taught her to fight, speak German and Arabic, and recite the details of important events in world history. Erik has trained Hanna for a mission, and when she is ready, she must leave home and find Marissa Wiegler. 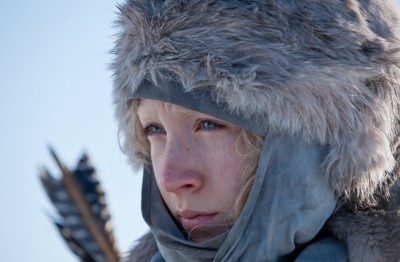 If you have seen the trailer for Hanna, you know that she does find Marissa, or at least her unsuspecting decoy, and promptly snaps her neck. Hanna then escapes from a high-security underground military base into the desert of Morocco. Hanna stumbles upon a traveling English couple, Sebastian (Jason Flemyng) and Rachel (Olivia Williams), and their two children, Sophie (Jessica Barden) and Miles (Aldo Maland). Hanna's social skills are a little rusty, and her deadpan response to Rachel's question about her mother is perfect dark humor. Sophie is a hilariously high-maintenance teenager who constantly babbles about boys, cosmetics and designer purses. She drags Hanna under her wing and informs her that putting an excited male suitor in a chokehold is never appropriate.

Wright, who also directed Ronan with great success in Atonement, creates with Hanna a warped fairy tale so subversive as to initially hide its identity. Erik is the hunter, and Marissa is the witch. There is even a Mr. Grimm and a Big, Bad Wolf of sorts, but Hanna defies characterization as the deadly heroine. She gets swept into a frantic chase across Europe, and Marissa sends sexually ambiguous, circus-ditty whistling Isaacs (Tom Hollander) to find her. Somehow Hanna keeps a breakneck pace but still finds time for several beautiful moments of discovery for Hanna, who, until meeting Sophie, has never had a friend. 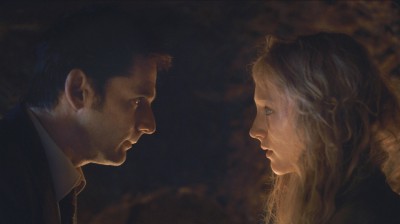 Wright shoots Hanna with a dizzying array of trick shots that somehow never become distracting, and the Chemical Brothers deliver the film's driving electronic soundtrack. Each action scene gets its own rhythmic banger, and the British beat-makers carry several melodies, like Hanna's theme and Isaac's club tune, throughout the film. The soundtrack perfectly matches, or perhaps sets, the intensity of the film, which stretches its PG-13 rating to its breaking point. The action is furious, brutal and realistic, and Ronan and Bana no doubt trained heavily for these scenes.

The mystery surrounding Marissa, Erik and Hanna is too intriguing to spoil, but the film constantly moves toward a revelation that is both unexpected and plausible. The script, direction and locations of Hanna all contribute to its success, and Ronan's performance seals the deal. Ronan appears wise beyond her years, and she is at once naïve and world-weary in the title role. I cannot think of another young actress better suited to handle the roller coaster of drama and action in Hanna, and Ronan will no doubt do great things in the future. Bana and Hollander are similarly perfect in their roles, and neither allows his celebrity to consume his part. Blanchett really is great as the icy Marissa, and her character is not afraid to get her hands dirty. Wright proves once again his skill at crafting a tight, involving film with equal parts style and substance. Rarely are action films, or films in general, as satisfying as Hanna. 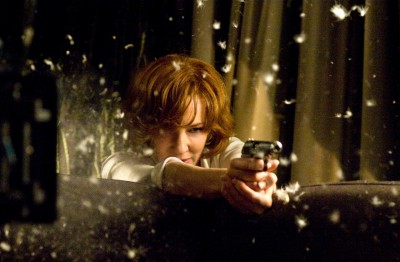 Universal takes some flak for their catalog titles, but remains on a roll with their high-definition new releases. The 2.40:1/1080p/AVC-encoded transfer for Hanna is a thing of beauty, and don't worry, its occasional softness precisely replicates the theatrical experience. Detail is abundant and texture impressive, and there are several landscape shots in the Moroccan desert and Finnish icescape that are spectacularly deep. The picture alternates from the harsh, gritty world of the CIA to Hanna's warm, arid road of discovery. Colors are crisp and perfectly saturated, and skin tones are spot on. The picture does have a softer appearance at times, which complements the film's warped fairly tale narrative. Blacks are solid, and shadow detail is impressive. There are absolutely no issues of artifacting, edge enhancement or noise reduction. This is an impressive transfer.

The 5.1 DTS-HD Master Audio track is similarly impressive, and at times threatens to separate house from foundation. As with similar demo-worthy tracks, this lossless 5.1 offering uses the entire sound field effectively to create a truly immersive experience. Dialogue is always clear and balanced, and directional dialogue comes from each speaker as necessary. Action effects are boisterous but never harsh, and the LFE practically explodes during some of the wilder scenes. The great Chemical Brothers soundtrack is treated to audio precision, and it never overwhelms the dialogue or effects. Those looking to test out a new 5.1 system should definitely give Hanna a spin. French and Spanish DTS 5.1 tracks are also available, as are English SDH, Spanish and French subtitles.

Hanna arrives on Blu-ray as a "combo pack" release that includes a downloadable digital copy. An embossed slipcover wraps the standard Blu-ray case. Universal includes a fair number of extras (in HD!) for Hanna, and the more substantial pieces retain the film's slick production values. 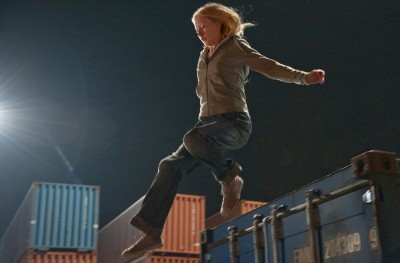 One of 2011's best films, Hanna follows its young heroine's deadly mission to force her father's icy CIA handler out of hiding. Director Joe Wright crafts a twisty, emotional and exciting thriller, which is anchored by an impressive Saoirse Ronan and strong supporting turns by Cate Blanchett and Eric Bana. Visually impressive and narratively satisfying, Hanna is a ride worth taking. Universal's Blu-ray is visually and sonically impressive, and includes a few worthwhile extras. Highly Recommended.